Skip to content
This is Lyrical Dissection, a feature at Nerd With An Afro where I analyze a song’s lyrical content for your entertainment. It’s not the easiest thing to do, but it has to be done. The song I’ll be dissecting this time comes from a 16 year old indie-pop singer from New Zealand named Lorde and it’s called “Royals.” 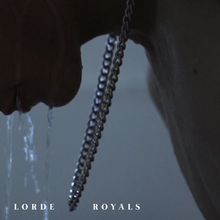 I’ve never seen a diamond in the flesh
I cut my teeth on wedding rings in the movies
And I’m not proud of my address,
In a torn-up town, no post code envy
Hmm. So she’s basically saying that she didn’t grew up wealthy, mentioning the fact that she’s never seen a diamond in real life (so do most of the population). She knows she doesn’t live a life of luxury like a lot of people in the upper class. She doesn’t live in the posh suburbs of Beverly Hills. She sort of represents the working class of New Zealand.
But every song’s like gold teeth, grey goose, trippin’ in the bathroom
Blood stains, ball gowns, trashin’ the hotel room,
We don’t care, we’re driving Cadillacs in our dreams.
But everybody’s like Cristal, Maybach, diamonds on your time piece.
Jet planes, islands, tigers on a gold leash.
We don’t care, we aren’t caught up in your love affair.
She just described the majority of rap and hip-hop songs out now; grills, alcohol, designer clothes, expensive cars, etc. She’s saying that there’s too many songs out there talking about materialistic crap that contains no true value and that 99% of the population don’t have the budget to afford. And she’s also saying that she and her friends don’t care about this stuff and won’t be obsessed with materialism like the majority of the mainstream. I’m really digging this message.
And we’ll never be royals (royals).
It don’t run in our blood,
That kind of luxe just ain’t for us.
We crave a different kind of buzz.
Let me be your ruler (ruler),
You can call me queen Bee
And baby I’ll rule, I’ll rule, I’ll rule, I’ll rule.
Let me live that fantasy.
Lorde and her friends know that they won’t be these “royals,” AKA celebrities. They’re basically rejecting the celebrity lifestyle that so many want to acquire. They want to live the simpler life away from the craziness. Very hippy-ish, but I’ll take it.
My friends and I – we’ve cracked the code.
We count our dollars on the train to the party.
And everyone who knows us knows that we’re fine with this,
We didn’t come from money.
Again, Lorde and her friends live a simple life of the working class. They use the public transportation system and don’t have a lot of money. They just wanna live life and people know it. An introspective message that anyone in the working class can relate to. Hell, I take the bus/train to school and back home and it’s not cheap at all. So, yeah.
Ooh ooh oh
We’re bigger than we ever dreamed,
And I’m in love with being queen.
Ooh ooh oh
Life is great without a care
We aren’t caught up in your love affair.
More of the hippy stuff. Not caring about material things and just living.
Overall, I can’t find anything wrong with this song. To be honest, it’s one of the more perfect songs out there. The minimalistic production compliments her vocals very well and it’s catchy as hell. At first, I didn’t think much about her and this song, but then I started hearing it everywhere and I went and re-listened to the song again and it really grew on me. I like how she wasn’t like other female pop singers that are out there singing songs that are just about love, partying, and other bullshit (looks at Miley Cyrus). I like the overall message of the song; forge your own path and don’t be worried about the material things in life. You actually wanna know something that’s ironic? This song has this anti-fame message, yet, as I speak now, it’s become the number one song on not just the Alternative charts, but also on the Billboard Hot 100. Right now, a bunch of middle/upper-class 20-something socialites who wear American Eagle and Gucci are singing along to this song that subliminally disses their lifestyle. This song actually reminds me of “Thrift Shop” a lot; both songs have a message that the working class can relate to that rejects the upper-class lifestyle and both songs became number one hits this year. I actually went and listened to some of Lorde’s other music just to be sure she’s not some fluke and she’s pretty good. Her music is very unique, she writes all of her songs (unlike certain artists), and they all have great messages, ranging from adolescence to fear of fame, and, most of all, SHE’S 16 YEARS OLD. She’s got more talent than some artists who are twice her age. That’s amazing. I recommend you check out The Love Club EP and her new album, Pure Heroine. You won’t be disappointed by what you’ll hear. So I salute Lorde for her talent and I hope she continues making the music she wants that stays true to herself and doesn’t compromise her integrity. I wish artists like her have more attention and success unlike some skanks (looks at Miley Cyrus again).
This has been Lyrical Dissection, you are dismissed.
A’ight, peace!!