Welcome to Target Practice where bad popular songs of the past and present get shot. What a disappointment Maroon 5 has become. They actually had some pretty good songs in the past like Makes Me Wonder, This Love, and She Will Be Loved. But over the years, their music has experienced a decline in quality and it all started with Moves Like Jagger (which has nothing to do with Mick Jagger at all). That particular song was where Maroon 5 started to make more poppier songs and it got worse. Their fourth studio album, Overexposed, was a mess that doesn’t even sound like it was made by Maroon 5.  Hell, if Adam Levine decided to make a solo album, no one could tell the difference between that and Maroon 5 now. The other band members have taken a backseat for Adam and that’s sad. I hope their next record doesn’t sound like Overexposed, but I’m having doubts about that after hearing the singles. To celebrate the deaths of Maroon 5’s credibility, let’s look at today’s Target Practice which features marijuana aficionado Wiz Khalifa, Payphone. 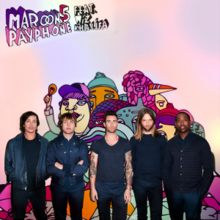 I’m at a payphone trying to call home
All of my change I spent on you
Where have the times gone? Baby, it’s all wrong
Where are the plans we made for two?

A payphone? What decade are you living in? Who the fuck uses a payphone in 2014? You can’t be THAT old or not up to date. For some reason, I picture Adam Levine living under a rock for 15 years. I can’t wait for Maroon 5’s next single, Walkman.

Yeah, I, I know it’s hard to remember
The people we used to be…
It’s even harder to picture,
That you’re not here next to me

You say it’s too late to make it,
But is it too late to try?
And in our time that you wasted
All of our bridges burned down

Reminiscing about an old relationship and realizing it can’t be saved, but Adam is trying to fix it, which the girl doesn’t want. Sounds like the actions of a desperate man. Next thing you know, he’ll make an entire album named after her dedicated to trying to win her back.

I’ve wasted my nights,
You turned out the lights
Now I’m paralyzed
Still stuck in that time
When we called it love
But even the sun sets in paradise

Dude, get over it. She’s not coming back. You really need some help.

I’m at a payphone trying to call home
All of my change I spent on you
Where have the times gone? Baby, it’s all wrong
Where are the plans we made for two?

If “Happy Ever After” did exist,
I would still be holding you like this
All those fairy tales are full of shit
One more fucking love song, I’ll be sick

No shit, you moron. What grown person believes in fairy tales and happily ever after? Life isn’t a Disney movie, Adam. There is no happy ending. And you’re sick of love songs? This coming from someone who writes love songs. Even Ne-Yo, the guy who made So Sick, thinks you’re full of shit. Also, the needless profanity, because EDGY!!

Oh, you turned your back on tomorrow
‘Cause you forgot yesterday.
I gave you my love to borrow,
But you just gave it away

You can’t expect me to be fine,
I don’t expect you to care
I know I’ve said it before
But all of our bridges burned down

You know? I’m actually siding with the chick on this one. She just wants to move on with her life and Adam is trying to drag her back into the past. Another thing, we never get any details about the relationship, just Adam’s bitching about how they’re not together and all of that crap. What happened in this relationship? What went wrong? We’ll never know. Anyways, let’s finish this with Wiz Khalifa’s verse. Let’s see if he can help bring some detail into this song.

Man, fuck that shit
I’ll be out spending all this money
While you’re sitting round wondering
Why it wasn’t you who came up from nothing,
Made it from the bottom
Now when you see me I’m stunning,
And all of my cars start with a push of a button
Telling me the chances I blew up
Or whatever you call it,
Switch the number to my phone
So you never could call it,
Don’t need my name on my shirt,
You can tell it I’m ballin.
Swish, what a shame could have got picked
Had a really good game but you missed your last shot
So you talk about who you see at the top
Or what you could have saw but sad to say it’s over for.
Phantom pulled up valet open doors
Wiz like go away, got what you was looking for
Now it’s me who they want, so you can go and take
That little piece of shit with you

Wow. Absolute wow. Wiz is once again bragging about being rich and talking shit to the haters throughout the whole verse. Aside from the fact that he doesn’t even try to rhyme anything and his flow is off, it sounds like they told Wiz that he was gonna be on a song with Maroon 5, but they didn’t tell him the concept of the song, so he just did whatever he does. So what did his verse add to the overall song? ABSO-FUCKING-LUTELY NOTHING!!

This song is a fossilized pile of dried-up feces. It was a fail from the start. The lyrics are mediocre and poorly written, the production is uninspired and bland, Adam still sounds like he has no balls, and Wiz Khalifa’s verse was completely pointless. Seriously, if you remove his verse from the song, you’d miss nothing. Adam Levine sounds like an obsessed douche who can’t let go of the past and move on. If this song had more detail put into the lyrics and the idea, then it might have been better. But what we’re left with is another forgettable love song that makes me feel no sympathy for the protagonist. Is the song catchy? Sure, but catchiness doesn’t always equate to good. It’s a damn shame that Maroon 5 stooped very low in their music because they had potential. Hopefully, they put some effort into the next album. Next week, it’s been a while since I reviewed a rap song, so I’m doing just that, plus, I’ll be talking about Wiz Khalifa again.