Welcome to Target Practice where bad popular songs of the past and present get shot. The 2010s decade has been pretty good to the indie/alternative scene. A lot of acts started seeing success and recognition. Artists like Foster The People, fun. Gotye, The Lumineers, Bastille, and Lorde have either scored a number one hit or made the Top 10. The indie kids have become regulars on the Hot 100’s Top 40 alongside pop stars, rappers, R&B singers, EDM acts, and country singers. But with anything that becomes mainstream, it’s bound to be watered-down. A good example of that is today’s Target Practice from L.A. band Echosmith, Cool Kids. 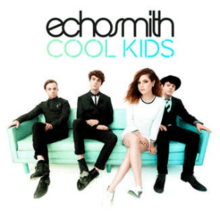 She sees them walking in a straight line, that’s not really her style
And they all got the same heartbeat, but hers is falling behind

So here’s the scenario: some girl sees the popular kids walking in a way that she doesn’t. My guess is that they walked like this.

Also, I’m pretty sure all humans have the same heartbeat. If your heartbeat is different from others, you might have a heart problem and you might be seconds close to death.

Nothing in this world could ever bring them down
Yeah, they’re invincible, and she’s just in the background
And she says,

Invincible, eh? You might be exaggerating, my friend. Everyone has a weakness. Achillies? His unprotected heel. Superman? Kryptonite. Vampires? Sunlight. An Internet troll? Lack of attention.

He sees them talking with a big smile, but they haven’t got a clue
Yeah, they’re living the good life, can’t see what he is going through

Oh, so we’re doing another story. Okay. You didn’t say anything else in the first verse, it was just “a girl sees the popular kids and she wants to be like them,” that’s it. That wasn’t a story, that was a moment. That’s the equivalent of saying “I just went into the bathroom and took a shit.” That ain’t a story, either, but it’s more so than this. Maybe this is all building up to something near the end of the song. Oh, well. For now, let’s look at this “story” in the second verse. It’s a guy seeing the cool kids. Not sure if these are the same kids from the previous verse because they didn’t specify any-fucking-thing. Starting to lose interest.

They’re driving fast cars, but they don’t know where they’re going
In the fast lane, living life without knowing
And he says,

Then what’s the point of driving if you don’t know where you’re going? You’re wasting gas just by driving around and not go anywhere. Sheesh, I think these kids might have been dropped as newborns.

And this is the part of the song where we get no new lyrics (and no, saying “whoa” a bunch of times doesn’t count as actual lyrics), so basically, one, both events of the verses never go anywhere or come to some resolution, two, the rest of this song is basically a repetition of the hook, and three, THE SONGWRITERS ARE FUCKING LAZY!!

This song is a lazy aura of shallowness. While the production’s alright and the lead singer does sound out of breath, my main problem with this song is the same problem I had with Rude, the lyrics. The sad thing is there was actually a good idea buried here. A look at a teenager’s perspective of the popular clique and how their views might differ from actual reality about that clique. This could have been one of the best written songs of the past couple of years. But the incompetence of the writers failed this concept and what we’re left with is a bunch of moments that aren’t even that well-described by the lyrics. Songwriters, if you’re gonna write a story in your songs, understand how narrative works. You gotta have details. I’m not suggesting that you write a novel, but tell us something important that goes on in the setting, don’t waste time like this song did.