Boy, was 2012 a crazy year. There were people who seriously thought the world was gonna end. And when December 21st passed and nothing happened, they felt stupid. Anyways, 2012 is a year that’s special to me, mainly because it was when I graduated high school. Also, I could tolerate at least half of the songs on the charts. Indie music was making its impact on the charts to break the monotony of pop stars and rappers and club music wasn’t as big as it used to. Still, it doesn’t mean that crap won’t spill through (because it always does). Let’s start the list.

I’m not ashamed to say that I really like Party Rock Anthem. It’s not the most deep, thought-provoking song out there, but it’s tons of fun. I wish that I could say the same about Sexy & I Know It. In spite of its title, this song is just pure, plain ugly. LMFAO took a huge step-down with this piece of shit. All of the fun “just want to have a good time” vibes have been replaced with the audio version of a dude swinging his dick in front of you for three minutes (the video doesn’t help matters). The beat is slower and sludgier. All of the energy has been sucked out of the song like a black hole and what you’re left with is just pure ugliness. This shit is just terrible.

So this is the Biebs’ attempt at growing up, eh? With these two laughable piles of shit. As Long As You Love Me sounds like nearly every song in 2012 that had dubstep in it with this awfully annoying beat that doesn’t properly utilize dubstep well. Biebers’ singing is weak and whiny and the lyrics are hackneyed and cliched. It’s basically the same as the Backstreet Boys song of the same name, only with unneeded drama added to it. Big Sean makes an appearance, contributing a bad forgettable verse. Why do people like this song? Boyfriend sounds like a cheap ass diet Justin Timberlake song without the coolness and charisma of the original. The beat is a cheap rehash of The Neptunes’ sound, his attempts at singing are painful, and the lyrics? Where do I start with the lyrics? These are some of the most idiotic, corniest lines ever written in pop music. 5 year olds could come up with something better than this. Just check out his hilarious attempts at rapping and you’ll understand what I’m saying.

If I was your boyfriend, I’d never let you go
I can take you places you ain’t never been before
Baby, take a chance or you’ll never ever know
I got money in my hands that I’d really like to blow
Swag, swag, swag, on you
Chillin’ by the fire while we eatin’ fondue
I don’t know about me but I know about you
So say hello to falsetto in three, two, swag

Epic fail. I’m actually glad the whole world are starting to realize how much of a dick he is. 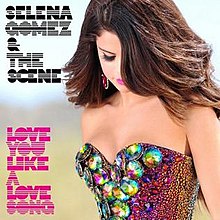 God, I hate this shit. To think I actually gave Selena a chance because I thought she wasn’t that bad, but songs like this are making me reconsider. This is crap. The production is artificial electro-crap, the chorus is repetitive as fuck, and the lyrics sucks. The title makes no fucking sense. What does she mean by Love You Like A Love Song? There’s a lot of different love songs out there that explores different aspects of love and this song doesn’t specify itself. The vagueness really kills this song and even worse, it sounds like a lot of pop songs out there, especially in the production end. If this was given to another female pop star, there wouldn’t be any difference. That’s how lazy this is.

Let’s just get this out the way; it’s a song about blowjobs, not whistles. Any hint of subtlety is thrown out the window. The hook leaves a bad taste in your mouth (no pun intended) and is made worse by the vibe of the song. The production is this mix of a simple acoustic guitar melody and dubstep bass and drums. I’m not gonna even talk about the verses because they’re nonsensical gibberish, something to be expected from a Flo-Rida song. I’m truly convinced that Flo-Rida is just an android created by record labels to make shitty pop/dance music to make money off of. That’s the only reason why he’s still around scoring hits and making millions. There’s no way anyone would enjoy this shit without any irony.

If there was any song that epitomized club garbage, it’s this one. Turn Me On is club garbage personified. The production is some of the worst EDM ever made; it’s loud, chaotic, and clunky to the point of being unlistenable. Hell, this entire song is unlistenable. Nicki Minaj is on this crap because of course she is, and she’s unrecognizable thanks to the ton of Auto-Tune and effects slapped onto her vocals making her sound like a demonic robot. How do you take one of the most recognizable voices in music and make her sound like this? There’s no talking about the lyrics because they’re complete and utter garbage. Urgh. I honestly hope that we never get more processed garbage like this in the future.

Straight out of Young Money’s C-listers is Tyga with the most boring, uninteresting club song ever. The song around 3 minutes long and yet listening to it feels like an eternity. More than half of this song is just the hook, which is just the repetition of “rack city, bitch, rack rack city, bitch.” The verses are short, but they’re not any better as it’s about strippers and they contain some of the worst lyrics you would’ve ever heard in rap, including this gem.

Got your grandma on my dick

That’s an image I wanted in my head, Tyga having sex with someone’s grandmother. That’s not gross at all. Also, the beat is also terrible as it was the first introduction to DJ Mustard and his formula of simple melody and drum loop and obnoxious chants. This song is so awful, I’m still baffled at the success it achieved. Oh, well.

Oh, hi, Cher Lloyd. Glad to see you again. The same bitch behind Swagger Jagger (yes, that is a real song and no, I’m not posting a link to it because of the horrendousness of it; go check it out for yourself at your own risk) also made this. A song where she talks shit about her ex after seeing him in town. This is basically a Taylor Swift song, only more immature and without hiding behind a squeaky-clean image. Cher is basically spewing out her insecurities and makes herself unlikable and unsympathetic in the process. If you’re gonna be the antagonist of your own song, give the listener at least one quality about you that’s likable. There is no reason why anyone should side with Cher here. She’s acting out of bitter jealousy. Also, that grunting she does every 5 seconds doesn’t help her case. I feel bad for any guy who dates Cher Lloyd.

My God, I can’t stand this song and it’s only at number three on this list. It has annoyed me throughout my entire senior year in high school. Call Me Maybe contains some of the elements that I can’t stand about bad pop music. The production is generic sugarcoated garbage that you would hear on Radio Disney. It’s so fucking repetitive; it’s the worst kind of catchy, the kind that stays in your head for a long time and rots away your brain cells until it’s mush. Carly Rae Jepsen sounds like an even more immature Taylor Swift, which is funny because she’s older than Swift. And then there’s the writing; she’s attracted to a guy and wants to bone him. The lyrics are a bowl of crap that doesn’t make sense when you think about them. Also, the title makes no goddamn sense. How can you call someone maybe? You either do or don’t. Did I ever mentioned that I hate this song? Because I really do.

Not often do you get a song with an aptly-appropriate title. This song is ASS. The repetition of the word ass is so redundant, you start questioning your own life and what it means. A dentist drill to the brain is less painful than this. Then, halfway through the hook, the song cuts to an MC Hammer sample because… hammer time. Big Sean’s verses are your typical rap cliches; money and women. What makes the song worse is the remix, which has Nicki Minaj because… she has a big ass. Her verse isn’t any better, she’s just being her annoying self and in one part of her verse, she stretches out the last syllable of the last word of her line. If you can find a method of torture more painful, you have to be the most evil person on the planet. Every second this song is on, you’re just begging for it to be over and when it is, it’s a relief. This song is a form of evil that leaves its listeners traumatized forever like they were raped. We will never recover from this record.

Before we get to number one, let’s go through some dishonorable mentions.

If there was a song equivalent to vomit, piss, and semen topped off with sewer water, this would be it. It is annoying. The hook is repetitive as fuck, as it’s nothing more than the word cake being repeated a number of times. The production is all sloppy and poorly mixed. The lyrics are filled with nonstop unclever euphemisms for sex. The original song is nothing more than a one minute, eighteen second interlude on her Talk That Talk album, and the remix is 3 minutes long and it features Rihanna’s ex, one of the R&B douchebags himself, Chris Brown, who gives us this nice little number.

Girl I wanna fuck you right now (right now)
Been a long time, I’ve been missing your body
Let me-let me turn the lights down
When I go down, it’s a private party
Ooooh, it’s not even her birthday
But I wanna lick the icing off
Give it to her in the worst way
Can’t wait to blow her candles out

Wow. Just wow. You seriously let him get away with saying this after what he did to your face, Rihanna? This is in poor taste just like this entire song. It’s dreary and depressing and unfit for any occasion.

So those were the worst songs of my high school graduation year a.k.a. 2012. It wasn’t easy, but someone had to do it. Now if you’ll excuse me, I’m gonna go back to listening to good kid, m.A.A.d city.