Welcome to Target Practice where bad popular songs of the past and present get shot. TIME FOR HISTORY LESSON!! In the early 90s, two New Orleans brothers Ronald and Bryan Williams, also known as Slim and Baby (later, Birdman), formed Cash Money Records as a way to get out of their neighborhood. They signed Juvenile, B.G., Turk, and Lil Wayne, who formed the Hot Boyz. In 1998, Cash Money signed a $30 million dollar P&D deal with Universal where they kept most of the publishing, royalties, and masters. The label started seeing a lot of success after the deal all the way to the early 2000s with hits like Bling Bling, Still Fly, and Back That Azz Up. Then, most of the artists, including their in-house producer Mannie Fresh, left the label due to financial issues. It reached a point where Wayne was the only original artist signed to the label and throughout the 2000s, he started gaining a lot of commercial success and he had a good run of quality material from 2005 to 2008. During that run, he formed his own imprint, Young Money Entertainment, alongside Mack Maine and they eventually signed artists like Tyga, Nicki Minaj, Drake, etc. To commemorate the forming of this new label, Wayne decided to do a compilation album with all of the artists titled We Are Young Money (spoilers: it sucked) and this is the big single off of that album featuring R&B singer Lloyd, the infamous Bedrock. 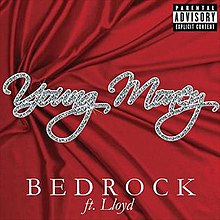 Thank you for letting us know the title of this song. We would have never figured it out by ourselves. Nice to see that some pop music trends never die. Unfortunately. Let’s start things off with Lil Wayne since he is the head honcho of Young Money.

She got that good, good, she Michael Jackson Bad I’m attracted to her for her attractive ass

Oh, the number of rap songs that use the Michael Jackson Bad punchline. Also, Wayne is only interested in this woman’s ass. Doesn’t care about her looks or personality, just her butt. Remember, ladies: if your face looks like a combination of Sheneneh Jenkins and a deformed horse yet you have a nice ass, Wayne would go out with you.

LAME!! Also, who the fuck do you think you are with that last line, Chris Brown? Lil Wayne, ladies and gentlemen; advocating domestic violence. No wonder he and Chris gets along, they share the same views on women.

God damn it, Wayne. Make up your mind. You’re just looking for an excuse to look at her ass, are you?

Cold as a winter day, hot as a summer’s eve Young Money thieves, steal your love and leave

Well, that was a dick move, tricking this woman into falling in love with you so you can have sex with her and then leave. You are an asshole, but that’s already obvious by everyone. Well, that’s the end of Wayne’s verse. Up next is Gudda Gudda. Let’s see why Wayne signed this guy.

I like the way you walk and if you walking my way I’m that Red Bull, now let’s fly away

Okay, I see we’re gonna get the same dumb shit from the last verse. Did this guy steal one of Wayne’s punchline books because it sounds like he did.

Let me be the judge? Okay. Gudda Gudda, you have been found guilty of stealing another rapper’s punchlines and being overall lame. Your sentence? Career execution.

I’m Gudda Gudda, I put her under I see me with her, no Stevie Wonder

“This motherfucker did not just say that.”

She don’t even wonder ’cause she know she bad And I got her, nigga, grocery bag

Ladies and gentlemen, the magnum opus of terrible punchlines. “And I got her, grocery bag.” Where to begin? First off, this is yet another addition to the hashtag flow that was big during the time this song was released. Second, that line doesn’t makes sense. He got her like a grocery bag? That is a new level of dumb. And third, the objectification; he’s basically treating this woman like she’s a trophy to win. No woman wants to be compared to an inanimate object EVER. What a way to end your verse with a line that insultingly stupid.

Oh baby, I be stuck to you like glue Baby, wanna spend it all on you Baby, my room is the G spot, call me Mr. Flintstone I can make your bedrock

GET IT?! BECAUSE THE FLINSTONES?! FRED FLINSTONE LIVES IN BEDROCK AND THAT’S BEING USED FOR A PUNCHLINE FOR CRAZY SEX?! ……… WHY IS EVERYONE QUIET?! Moving on from that nonsense, let’s get into more nonsense with the queen of kookiness herself, Nicki Minaj.

Okay, I get it, let me think, I guess it’s my turn Maybe it’s time to put this pussy on your sideburns

Pussy on your sideburns? That would mean that the dude’s face would be all up inside her vag-………

He say I’m bad, he probably right He pressing me like button downs on a Friday night

I’m so pretty like, me on my pedal bike He on my low scrunch, he on my echo whites

And now I’m confused. What the fuck is Nicki Minaj talking about?

He say, “Nikki, don’t stop, you the bestest” And I just be coming off the top as bestest

Bestest? That’s not even a fucking word, you bimbo. Nobody says that. Plus, you rhymed the word with itself. What’s the matter, couldn’t come up with anything to rhyme? And best at what because it damn sure ain’t rapping as evident by this verse. Up next is Drake. I hope he has something that contrasts this crap.

I love your sushi roll, hotter than wasabi I race for your love, shake and bake Ricky Bobby

You like her sushi rolls? Are you dating a vegan or something? Hey, if you’re into someone who doesn’t like meat, then that’s none of my business. Have fun jacking off every night.

I’m at the W but I can’t meet you in the lobby Girl, I gotta watch my back ’cause I’m not just anybody

“Hey, let me remind you that I’m famous, therefore, I have haters that I’ll write songs about even though I say I don’t care about them.”

I seen ’em stand in line just to get beside her I let her see the Aston and let the rest surprise her That’s when we disappear you need GPS to find her Oh, that was your girl? I thought I recognized her

“Being famous, I’m also rich, meaning I can buy cars that most hip-hop listeners dream of having and use that to steal other men’s girlfriends. Damn, it feels good to be a douchebag.” Tyga, you’re next.

She likes this, I like that. I like this, she likes that. Insert random lyric from Paula Abdul’s Opposites Attract.

She said I’m caged in, I think her conscious is She watching that Oxygen, I’m watching ESPN

And while you’re watching ESPN, your girl is hugged up with Drake watching whatever’s on Oxygen.

But when that show end, she all on my skin Lotion, slow motion, roller coasting like back forth, hold it She pose like it’s for posters and I poke like I’m supposed to Take this photo if you for me, she said, “Don’t you ever show this”

I’m too loyal and too focused To be losing and be hopeless, when I spoke this, she rejoiced it Said your words get me open, so I closed it Where your clothes is, I’m only loving for the moment

I doubt that anything you say would turn a woman on, Tyga, considering the things you say on record (more on that later). Now we have the last verse of the song courtesy of Jae Millz.

Uh, she ain’t got a man but she’s not alone Miss Independent, yeah, she got her own Hey gorgeous, I mean flawless, well, that’s what you are How I see it is how I call it, yeah

So he’s into lesbians. That aside, Mr. Millz is impressed with an independent woman who doesn’t need a man. Good to see that Millz has a goal of leeching off this woman with his rap career never taking off.

Look it how she walk, she know she bad Do, do your thing, baby, I ain’t even mad

OH, MY GOD, DUDE!! JUST PROPOSE TO HER ALREADY!! Just do something that’ll make you shut up.

And I ain’t even fast, I’ma stay a while Hold yo’ head Chris, I’ma take her down

Is Jae Millz seriously asking Chris Brown if he can beat up Rihanna for him? That’s fucking horrible. These Young Money rappers always have some of the most disturbing lyrics ever in mainstream rap. And negative points for not rhyming anything. After that, the rest of the song is the repetition of the hook along with Wayne namedropping members of Young Money, inlcuding those who I’m convinced don’t even exist.

This song is an unsetlling, painful gravel pit. What we have here is the perfect representation of Young Money as a group and individuals and the problems that they have. The beat is dated as hell, sounding like everything made in 2009 and 2010. Lloyd’s hook was laughably dumb, but it was relatively tolerable compared to the verses. Each rapper has 8 short bars (except for Tyga who has 12 bars) and they’re all filled with dumb punchline after dumb punchline. It’s stupid, vapid, and insulting to the listener’s intelligence. Are these really the best people Wayne could sign and push? I mean, I understand Nicki Minaj and Drake because of their appeal, but the world would do well without the others. Next Target Practice, Young Money Month continues with a song that put Drake on the map.