Welcome to Target Practice where bad popular songs of the past and present get shot. Young Money so far has released a compilation album, four Lil Wayne albums, two Drake albums, and a Nicki Minaj album all before 2012. One of the big problems with the label (one that’s also a problem with its parent label Cash Money) is that they’re focused too much on their big three, leaving less room for their other artists to shine. The label then decided to promote Tyga to expand the attention of the label. His first album for the label didn’t even sell gold, but he did manage to get a big hit out of it, which is today’s Target Practice, the DJ Condiments-produced Rack City. 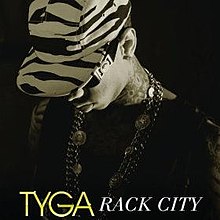 Well, I hope you like the phrase “rack city, bitch,” because it gets repeated hundreds and hundreds of time. Good to see that repetition will never die in popular music. God help me.

Is Rack City supposed to be a name of a strip club or anything? That’s what it sounds like. It doesn’t sound like a place I want to be at. It’s probably one of those cheap, run-down strip clubs with some of the ugliest women you would have ever seen.

Unless the V.I.P. room is huge, there is no way 100 people would fit in. This is how I imagine that area would look.

T-Raw you don’t know who you fucking with?

So you turned her into a lesbian. Well, any chick who sees what you look like would turn lesbian any second. But since he’s a famous rapper with money, some chicks probably don’t care if he looks like an alien camel. But maybe I’m being too harsh. Not all women are gold-digging opportunists, meaning there’s women who don’t care about money or looks. They probably like someone like Tyga or Lil Wayne because of their kind, loving personalit-BWAHAHAHAHAHAHAHA!! That is so funny, I can’t even finish this sentence with a straight face.

“Lil Wayne let me borrow some of his punchlines since I couldn’t come up with any of my own.”

Dude, you’re from the Valley. Nobody believes that you could kill someone. You’re as phony as Rick Ross.

Yeah, yeah. You’re getting money. Nobody cares, me included. Stop wasting my time.

I got ya grandma on my dick

I got ya grandma on my dick

So you’re talking to some stripper while you’re having sex with her grandmother?! That is disgusting. Eww…. I need a moment.

Okay, that was unsettling. Moving on.

Repetiton; the lazy writer’s best friend. Not much to say here that I haven’t already said. Next.

You’re not saying anything that other rappers who brag about their ride haven’t said. Why are you special? Answer, you’re not.

Tell that bitch hop out, walk the boulevard
I need my money pronto
Get it in the morning like Alonzo
Rondo, Green got cheese like a nacho
If you ain’t got no ass bitch wear a poncho

Now you think you’re a pimp? Dude, sit your ass down somewhere. There’s over-exaggerated bragging and then there’s just faking the funk, which is what you’re doing.

Are you just gonna kill any individual who looks at you the wrong way? Because that’s dumb.

A skinny-ass rapper covered in tattoos going crazy in the club. That must be a sight to see. Must be better than these awful punchlines.

Oh, look. Another Michael Jackson Bad punchline. It wasn’t that creative in the first place, it sure as hell ain’t creative now. Didn’t Lil Wayne use this punchline not even two years before this song was released? I guess laziness is contagious within Young Money, which makes sense if you think about it.

Rat T-T-T-Tatted up on my back

You’re not the only individual covered in tattoos, Tyga. But you are right about one thing, you do look like a young Splinter from Teenage Mutant Ninja Turtles.

All the hoes love me you know what it is

I’m pretty sure those “hoes” love your money and not you. If you were just some average joe, they wouldn’t pay you any attention. Let’s just wrap this up because I don’t want to hear any more of this shit. The song ends with a repeat of the hook and an outro that consists of Tyga saying “throwing hunnids, hunnids,” and “rack city, bitch, rack, rack city, bitch.”

This song is a rack of laziness and indulgence. If you want a capsulation of 2010s mainstream rap, this song is a perfect example. It’s a slow, boring strip club song. The beat is the same three-note bass loop that repeats throughout the track to the point of not sounding like an actual melody and barely-existent drums coupled with crowd chants that would be synonymous with DJ Mustard, who happens to produced this shit pile. The lyrics are your standard mainstream rap song with empty bragging. Tyga sounds bored throughout the song, rapping with a very monotonous flow. He doesn’t even sound like he wants to be in the club with the tone of this voice. Club songs are supposed to be uptempo, energetic, and most importantly, fun. This song has none of those things which is why it, alongside other DJ Mustard songs and most of trap music, fails. Next Target Practice, time for me to tackle Nicki Minaj again by looking at one of her most recent turds and no, I’m not talking about Anaconda since I’ve already said everything that needed to be said about that POS.