Welcome to Target Practice where bad popular songs of the past and present get shot. Question: who thought it was a good idea to let Birdman rap? And why hasn’t anyone stopped him? He’s been rapping for more than two decades now and hasn’t improved one bit lyrically. Every song he does and every song he’s featured on, he’s always the worst part of it. His verses mostly consists of him reading everything on his receipts after a day of shopping. Nobody wants to hear Birdman rap. Hell, why do you think his most successful singles feature Lil Wayne? The guy can’t carry a song by himself. Anyways, in 2013, the artists of Young Money/Cash Money released a compilation album together under the name Rich Gang (don’t know why they didn’t decided to go by YMCMB) and this is the lead single for that album featuring Lil Wayne, Birdman, Mack Maine, Nicki Minaj, and the bootleg T-Pain himself Future, this is Tapout. 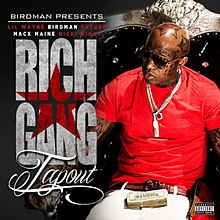 If you hating, you just need some pussy (Rich)

So we start things off with Lil Wayne and we’re already in stupid territory. He thinks that people who don’t like him don’t have sex and needs to have sex. That makes sense, sex changing your opinions on someone. It’s clear that Wayne is working on cartoon logic.

She fucked up when she gave me some pussy

You’re right about that. I feel bad for any chick who would give it up to that creature.

Say, “I fuck you better than that other nigga”

Stealing another man’s girlfriend: one of the topics in music that needs to die a horrible death.

That was lame… and gross.

And she don’t like them pretty niggas s’diddy niggas

So she likes ugly dudes. Huh. Whatever’s your preference, I’m not judging (yes, I am).

Why are you sleeping inside of her body like she’s a dead Tauntaun? Sleep in a bed, you fucking weirdo.

Hit it when I wake up tell the pigs I say, “Asalaam Alaykum uh”

Wow. That was unbelievably racist.

My bitch a choosy lover never fuck without a rubber

Well, she made the right decision of not having kids with this asshole. You gotta plan ahead.

Sounds like a stripper name. “COMING TO THE STAGE, HONEY MUSTARD!!”

That does not bring up positive imagery. Have you even seen a sea shell? I’m pretty sure it would not be satisfying sticking your dick into one.

Comparing your penis to a car. Like we haven’t heard that before.

Yeah, she say she love me, she just love this dick

I’m pretty sure you’re doing a good job making yourself rich. Onto Future, who doing the chorus (of course).

So you want to pin her down and choke her out until she gives? Are you having sex or are you wrestling? It sounds like you’re trying to kill her. Birdman is up next and thankfully, his verse is short, but let’s see how many material things he names.

So she passed out because she saw your crib, sauna, and jet? Overreact much?

Birdman spent millions on jewelry, a new kitchen, a Maybach with a glass top ceiling, Versace, Fendi, and Calvalli. Basically, he’s like a teenage girl at the mall with a new credit card.

Married to the money,
Millions in the bank
Alexander McQueen, rich in the paint

With the way he’s always talking about money, I wouldn’t be surprised if he was married to it. Also, Alexander McQueen. There’s probably more things that he bought that he wants to talk about, but couldn’t. Anyways, up next is Mack Maine.

That… was bad. Really. This warranted a feature? Four bars of bullshit? This contributed nothing to the overall song. On to Nicki.

Forestt Gump wasn’t even bald. That line doesn’t even make sense. Have you even seen the movie? Ugh.

Don’t let me tell ya twice, already told ya once
Eat that pussy

What is her obsession with drug dealers? She’s rich and famous, meaning she can get anyone she wants and she goes for lowlife criminals? Your standards are pretty low, Nicki.

I’m sure some perverted guys would love to know about your deep throat skills. Still, it won’t top Lil Kim swallowing a soda can.

Rhyming “on that ass” with itself four times. Now I see why people call Nicki the best.

Yeah, yeah. You have lots of money. Who gives a dick?

What the hell is pussy jewelry? On second thought, don’t tell me. I don’t wanna know. Well, that’s the end of her verse, and that’s where the song ends as there’s nothing…

Wait. What the fuck is this shit? There’s more? Ugh. Anywho, her talk about religion? Dude, you’re trying to have sex with this girl and you wanna bring up religion? Sounds like the best way for her to dry up.

I’m in prison with the pussy
And I’m fallin’, no cushion

…… in prison with the pussy? Being in prison is always a negative metaphor, no matter who you are, so don’t try to twist this into something positive. And if you’re falling into something that has no cushion, you’d be dead. Well, that’s that. The song is finally over and thank God.

This song is a wrestling event of arrogance and horniness. Everything that Young Money/Cash Money are is fully represented here: blatant materialism, constant sex talk, simple metaphors and punchlines, frequent stupidity, and little to no creativity. Top that off with a generic beat that sounds like every other modern mainstream rap song and that every performer on this shit sucked, but the worst one undoudtedly is Birdman. Dude didn’t even try. You know you’re terrible when Future isn’t even the worst part of the song. Just stick to rubbing your hands in the background of music videos, Birdman. Rapping isn’t for you. Well, that concludes Young Money Month. I am done talking about these artists and I need to recover from all of that shit. So next Target Practice, I review a Kanye West song.