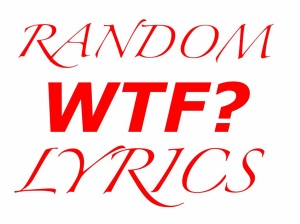 Welcome to Random WTF Lyrics where I pick out five random bad lyrics from five random songs. Let’s get started.

When I die, bury me inside the jewelry store

Dude, make up your damn mind. You can’t be buried in multiple places at once. The only way that could happen is if your body parts were chopped up and different pieces were put in different coffins. Even then, I doubt any store owner would want a coffin in the middle of the place. It’d be bad for business.

So when I die, bury me next to 2 bitches

Now you want to be buried next to two women? Are they already dead or was that already set up?

Bozo 1: Are you sure about this?

Bozo 2: Yeah. 2 Chainz specifically said on his will that he wants to be buried next to two bitches.

Bozo 1: Is that it? Where would we find two dead bitches to bury him with?

Bozo 2: What? Don’t look at me like that. Just get the coffins ready.

I Knew I Loved You-Savage Garden

Bruce Jenner has more balls than this sappy piece of limp dick.

I knew I loved you before I met you

So you fell in love with this chick before you even met her? You are dumb. I am not a believer in love at first sight because looks can be deceiving. If you genuinely decided to fall in love with somebody before you even get to know them (and I’m not talking about stalking someone online), you’re making up scenarios in your heads thinking they’re the perfect human being and all that sweet candy-coated crap and then once you find out more about what they are really, those hopes and dreams are crushed like egg shells. I speak from experience, I’m not saying this just to be a dick. I’m trying to save lives here.

Dr. Dre? (What up?) I gotta question if I may? (Yeah) Is it gay to play Putt-Putt golf with a friend (Yeah) And watch his butt-butt when he tees off? (Yeah) But, up I ain’t done yet In football the quarterback yells out hutt-hutt While he reaches in another grown man’s ass Grabs on his nuts but just what if It was never meant it was just an accident But he tripped, fell, slipped and his penis went in His teeny tiny little round hiney and he didn’t mean it But his little weenie flinched just a little bit And I don’t mean to go in into any more details but What if he pictured it as a females butt? Is that gay? I just need to clear things up

Eminem. What the hell are you talking about? Was your drug use THAT bad during the Encore days? God. Add that to the Unintentionally Gay Rap Moments portfolio. Nah, fuck unintentional. It became intentional by the end.

You ever hear a song that was dead on arrival the moment you hear the first line?

Baby let me put your panties to the side

Wow. This is a song where a guy is at a club trying to pick up women and this is the first thing he says. Any ounce of subtlety is instantly thrown out the window. Ladies, if a guy comes up to you and says let him put your panties to the side, you have two choices: A, buy into this stupid ass game he’s trying to play and be amazed by everything he says, or B, slap the everloving shit out of him for the words coming out of his piehole and then ignore him until he learns how to speak to women properly.

You misspelled fly just to force a rhyme. Bad enough I can barely understand what the hell Young Thug is saying due to him not enunciating, but when he does enunciate, we get shit like this. This is part of the reason why Young Thug is terrible. He can barely speak English and he can’t even structure a verse. And don’t give me that crap about him trying to be different and challenging the way rapping works or any other strawman, pulled-out-the-ass excuse made by the hipsters of Pitchfork, Complex, or any website like them who wouldn’t know rap music if it bludgeoned them in the face with a 2×4. Young Thug is literally a walking Boondocks episode. He is everything Aaron McGruder thought of when he created Gangstalicious. He does all of this, plus the cross dressing, for attention and to cover up his lack of musical talent and the fact that his music is complete ass sauce. But hey. If listening to a man who sounds like Jar Jar Binks being slowly castrated by a hot iron with Auto-Tune slapped on is your thing, then whatever.