Welcome to Target Practice where bad popular songs of the past and present get shot. Throughout the history of popular music, the United Kingdom has given us many talented acts, some who are the most influential artists of all time. The Beatles, The Rolling Stones, Led Zeppelin, The Who, Pink Floyd, Black Sabbath, Coldplay, Adele, etc. Unfortunately, the UK has also given us a good amount of crap artists as well (not saying the US is better because we’re guilty of the same crime), one of them being Cher Lloyd. She was a contender on the UK’s X-Factor (think of it as a clone of American Idol, though there’s also a US version as well), but she didn’t make it far. She’s a pop singer who also does some rapping kinda like Ke$ha. Let me say this again, I have no problem with anyone who isn’t a black male rapping as long as they’re good at it. The problem with Cher Lloyd is that she sucks so much. For today’s Target Practice, I was originally going to review Swagger Jagger, but the awfulness of that song was too much for me to handle, resulting in a failed suicide attempt. Because God is the ultimate troll and loves the taste of my suffering. So instead, here’s Want U Back. 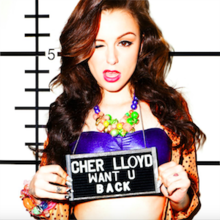 Hey, boy you never had much game
Thought I needed to upgrade
So I went and walked away way way
Uh

So she left this guy because she though he was a lame. Kinda shallow for throwing him under the bus like that, but we don’t know anything about this guy yet. He could be a doucebag or she’s just being a bitch. We’ll see.

Now, I see you’ve been hanging out
With that other girl in town
Looking like a pair of clowns clowns clowns
Uh

Well, now we know who the mature one is in this situation. The guy is just moving on with his life with a new girlfriend after YOU dumped him and now you see the both of them and start dissing them. This is starting to reflect poorly on your character.

So? It looks like you’re overreacting a bit seeing him and his girl doing everything y’all did when you were together. It’s called a date. If he wants to take his girl to Red Lobster, then let him. Why are you trying to deny him from their delicious cheddar biscuits? Remove the sand from your vagina because you’re starting to sound like Big Sean in IDFWU, a whiny little kid. As a matter of fact, how would you know where they hang out at? Are you following them everywhere? I can just picture Cher Lloyd watching her ex from a distance while wearing a trench coat, hat, and sunglasses. That’s not healthy behavior, you need help.

Wait. So after you dumped him because you didn’t think he had game, NOW you want him back? Make up your damn mind. You realize you blew it because he didn’t live up to your standards. You created this mess, not him, so take some responsibility for your actions.

And from the look of things, that plan backfired because you’re the one crying right now. You basically admit to being a manipulative bitch who thinks emotions are nothing more than toys to play with and this is basically karma coming back to bite you in the ass. Also, self-censorship. It needs to stop. Say it or don’t say it.

Not jealousy, huh? So the previous lyric where you called your ex and his current girlfriend clowns isn’t an act of jealousy? Somebody’s in denial. If you have to say that you’re not jealous, you are jealous. You’re reaching harder than Mister Fantastic for an excuse to diss his girl by criticizing her clothes. Cher, your insecurity is starting to show.

You clearly didn’t think this through
If what I’ve been told is true (is it true?)
You’ll be crawling back like boo hoo hoo
Uh

He didn’t think it through? He’ll be crawling back based on what you heard? Bitch, you are insane. You have crossed the line from jealous ex-girlfriend to creepily-obsessed stalker. You’re a step away from homicidal maniac. So let me get this straight: you dumped this guy and now you’re hoping that he comes back to you pleading to be together again? How did you think that was gonna work out?

Cher Lloyd: We are through.

Ex-Boyfriend: Cher, please. I’m begging you. Please take me back. I’m nothing without you, babe. Please.

Cher Lloyd: Never. Your pleading is music to my ears.

You dumping this guy was probably the best thing to ever happen to him. You were probably treating him like shit anyways. He’s got a new girl, he’s moved on, he’s probably happy right now while you obsess over him to the point where you lie to yourself. I’m pretty sure it’s YOU who isn’t thinking this through. Hell, I don’t think you were even thinking at all.

Ooh, I thought you’d still be mine
When I kissed you goodbye uh oh uh oh
Ooh, and you might be with her
But I still had you first uh oh uh oh

Look back at what I previously said. Your plan was flawed, there was no way it would go the way you would wanted it to. And so what if you dated him first? You’re no longer together. At this point, there are no more new lyrics as the rest of the timeframe left is reserved for this to repeat itself. That means I can end this now and thank goodness.

This song is a bipolar mess wanting something it doesn’t deserves. My God, I can’t stand this shitfest. There’s nothing to say about the production outside of the fact that it’s generic. Cher is all-around annoying. Her voice is nails-on-the-chalkboard grating to my ears. Don’t even get me started on the stupidity of the lyrics and premise. Cher is basically the delusional ex-girlfriend who thinks her ex is gonna take her back even when she talks shit about him and his current girlfriend. This is not appealing at all to anyone besides bitter girls who want to make their exes’ lives a living hell and the vagueness of these lyrics allow these chicks to put themselves in that situation. There’s actually another version of this song which features a verse from rapper Astro who raps in the perspective of the ex-boyfriend and it further makes Cher even more unlikable. It’s an ugly song for ugly people. Next Target Practice, I review a song from one of the world’s biggest girl groups.

6 thoughts on “Target Practice: Cher Lloyd “Want U Back””