Welcome to Target Practice where bad popular songs of the past and present get shot. Blue-eyed soul is a sub-genre of R&B that’s distinctive not because of the sound, but because the artists are white. Hall & Oates, Average White Band, Teena Marie, etc. are often put in this category, which I think isn’t fair. Just because their skin color is different from the usual artists performing this type of music doesn’t mean they’re not the same, especially when the music isn’t all that different. It’s like making a sub-genre of country music with black artists called Negro country. Anyways, let’s talk Robin Thicke. He’s low-key been in the industry for a while, writing and producing for big names and working on his own music, and became a big name thanks to Blurred Lines, which is the number two song of 2013 according to Billboard. Thicke as an artist is okay, but not great. He doesn’t really bring anything new to the table as his music is the same sleazy R&B that’s already out there, which brings us to today’s Target Practice. Featuring the good kid from the m.A.A.d city himself Kendrick Lamar and produced by the same asshole behind Only, this is Give It 2 U. 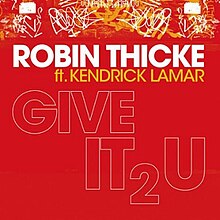 Wooo! I got a gift for ya
I got this for ya, a little Thicke for ya
A big kiss for ya, I got a hit for ya
Big dick for ya, let me give it to ya

“LOOK AT MY PENIS. LOOK AT HOW BIG IT IS. ARE YOU IMPRESSED?”

I wanna give it to you, through the night
And make everything you fantasize
Come true, ooh baby
I’ll make you so, so, so amazing
I’ll give it to you

That grown man is probably crying because he just saw a woman fall to her death. Anyone would cry over that. I think it’s time we stopped using the phrase “you look like you fell from the sky” because the imagery that brings up is not that good. Also, look back at what I said about the first four lines. I hope this chick gives him a fist to the face instead of her vagina.

This guy really wants to put his penis on this woman. That’s a red flag telling you “RUN, BITCH, RUN!!”

Please, I got a taste for ya
Tasty, I bought lace for ya
Freaky, I’ll put it on ya
Yeah, so I can come and take it off ya
Yeah, and get off to ya

Maybe this isn’t the best time to let anyone know of your Fifty Shades Of Grey fantasies. Wait until your relationship is established first. Let’s move on to Kendrick Lamar. He’s a great rapper, so he’s gonna give us a good verse, right?

Uh, you’re like a needle in a haystack
Uh, I wanna sit you where my face at
Uh, lunch with a few Mai-Tais
Uh, purple kisses on my tie
Uh, life give leave a dick loved
Uh, now you gettin this dick, love
Uh, I’m lookin for you with a flashlight
I wanna feel what a real fat ass like
No injection, I learned my lesson
I walk it like I talk it, baby this pedestrian
Runnin through your mind like Jackie Joyner
Pussy like pop like “DO!” Go get me a burner
Got shot like “DO!” This can be detrimental
T-shirt and panties, that’s your credential
You’re cotton candy, I need a fistful
I’m often antsy, hope that convince you

Wrong. Wow. Remember during my Worst Songs of 2013 list when I said that Kendrick’s verse on Fuckin Problems was the worst verse he has ever done through his entire career? I was wrong. THIS is the worst verse Kendrick has ever done through his entire career. A bunch of bad lines with the same sleaziness as the rest of this song. Why, Kendrick? Why?

This song is a perverted, unlistenable mess. The beat is electro-pop trash and the lyrics are douchy. Nobody looked good here. I can see why Paula Patton filed for divorce against Robin. This song makes him look like a horny dickhole and Kendrick didn’t do any better either. I’m so glad he never went this route on To Pimp A Butterfly. Hell, that album had a song that talked about sex WAY more clever than this shit. While I believe that the backlash Robin Thicke received from Blurred Lines was undeserved, I feel no sympathy for him as in other songs like this one, the guy was constantly talking about picking up women in spite of being married and that leaked over from his songs to his own life and he suffered the consequences as deserved. Next Target Practice, enough of the sex songs, let’s go into some brag rap with Migos.

Groove Is In The Heart-Deee-Lite

4 thoughts on “Target Practice: Robin Thicke ft Kendrick Lamar “Give It 2 U””