Welcome to Target Practice where bad popular songs of the past and present get shot. Hip-hop music has a history of rappers who gain fame and notoriety off of at least one or two hit songs and then are forgotten about by next year. A lot of these acts are more focused on a quick profit than any passion for the music and culture or any career longevity. Now, with the Internet and the explosion of social media and apps like Vine, any loser with access to a computer, microphone, and Pro-Tools can be a famous rapper and the results are the charts being diluted with more shitty novelty songs from more shitty rappers, the latest one being today’s Target Practice. From New Jersey rapper Fetty Wap, this is Trap Queen. 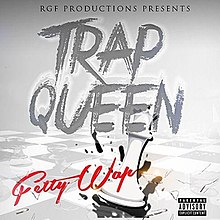 I’m like, “Hey, what’s up? Hello.”
Seen your pretty ass soon as you came in that door

So we start with Fetty Wap meeting his future “trap queen” and already, my ears hurt because this guy’s voice is annoying.

I just wanna chill, got a sack for us to roll
Married to the money, introduced her to my stove

Now, you’re both getting high and you show her the stove where you cook drugs. Moving too fast for a first date. What makes you think she isn’t an undercover agent?

Drug dealer: Come to the kitchen, baby. Let me show you where I cook the dope. This is where my money comes from.

Police officer: THIS IS THE POLICE!! WE HAVE THE PLACE SURROUNDED!! COME ON OUT WITH YOUR HANDS UP!!

Showed her how to whip it, now she remixin’ for low
She my trap queen, let her hit the bando

Now you inducted her into your drug-dealing activities. I’m sure her parents and yours would be very proud.

You got lots of money, enough to buy a Lamborghini. Who fucking cares?

Man, I swear I love her how she work the damn pole
Hit the strip club, we be letting bands go

Wait. Your girl’s a stripper? Why is she working with you as a drug dealer? Isn’t she already getting paid to strip or is that not profitable enough? I hope not. So many rappers and R&B singers have talked about their love for strip clubs and making it rain. She should already be set financially.

Everybody hating, we just call them fans though
In love with the money, I ain’t ever letting go

That’s not how it works. If someone is hating on you, they’re not your fans. I seriously can’t stand people who think like that. It’s opposite day logic.

Yep. This repetitive bullshit is the hook. Ugh. You know? If this was released in the early 2000s, this would blend in with a lot of “thugs need love, too” songs. Hell, that’s exactly what this song is. Just picture Ja Rule rapping/singing this song along with Ashanti.

“I GOT A LOT OF CASH THAT I’M GOING TO SPEND ON A LOT OF STUFF I DON’T NEED.”

It’s big Zoo Wap from the bando, without dinero can’t go
Remy boys got the stamp, count up hella them bands though
How far can your bands go?

Remy Boys? That has to be one of the lamest names you could ever give your crew ever. Wait. This has nothing to do with what’s going on with this song. This is supposed to be a song about your “trap queen” and you’re now talking about your crew? Jeez. At least when Drake went off-topic on Best I Ever Had, it was on a different verse. You went off-topic mid-verse. That is just tacky.

How far can your bands go?
Fetty Wap I’m living fifty thousand K how I stand though
If you checking for my pockets I’m like

We don’t believe you, you need more people.

And now we’ve reached the centerpiece of this piece of shit song: the line about breaking into someone’s house and having sex with their girlfriend. You fucking dickhole. Even if I’m willing to forgive the voice, the lyrics about drug dealing and spending money on useless crap, and the chorus, I will NEVER forgive this. This line is the straw that broke the camel’s back and made this song irredeemable to me. Can’t we have at least one popular song that doesn’t mention stealing someone’s girlfriend? I’m done with this.

This song is a monarchy of crap. The praise that this song gets is undeserving. The beat is generic trap with uninteresting melodies, Fetty Wap’s voice is godawfully annoying as he tries and fails to rap and sing at the same time, and the lyrics are not that different from any standard mainstream rap song. Trap Queen brings nothing new to the table, everything it’s trying to do has been done before on better songs and from better, more talented rappers. Even in terms of dumb party songs, it’s really nothing special. I’ve heard the defense that it’s not as bad as songs like CoCo or Lifestyle. That doesn’t make the song any good, though. There comes a time where you have to call a spade a spade. No need to sugarcoat it. Migos is up next.