Welcome to Target Practice where bad popular songs of the past and present get shot. I fucking hate Migos. There. I said it. This trio of dildos are part of the new wave of Atlanta rappers gaining notoriety alongside Future, Young Thug, Rich Homie Quan, etc. And all of these new rappers have one thing in common outside of being from Atlanta: they all sucked. Big time. Migos became well-known in 2013 thanks to Drake hopping on the remix of one of their songs, Versace. Spoilers: that song sucked alongside their follow-up, which was named after a crappy kids’ show (you figure it out). This group has yet to truly blow up in the mainstream as they don’t have a Top 40 single (though I feel that could change anytime soon). Today’s Target Practice victim is their highest charting single to date, peaking at number 69 on the Billboard Hot 100 (ooh, so close). This is Fight Night. 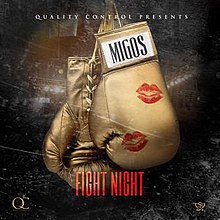 Migos continues their run of stupidity with this hook. I’ve heard of beat the pussy up, but knock the pussy out? Like fight night? I didn’t know vaginas had brains. It’s like rappers are always looking for new, unnecessary phrases for rough sex. We have enough.

If you know me notice that my feng shui
Certified everywhere, ain’t gotta print my resume

Okay, I don’t even speak Chinese, but I’m pretty sure that doesn’t make sense.

Talking crazy, I pull up andele
R.I.P to Nate Dogg, I had to regulate

To paraphrase Pen Reviews: No, no, no, no. You don’t get the right to mention Nate Dogg in your piece of shit song.

Pocket rocket fire, watch him disintegrate
It’s a truckload coming on the interstate

You know? Whenever I listen to music lyrics, I always like to picture what is being said. When I hear this, what pops up in my mind is the image of a guy standing on a freeway, shooting a rocket out of his crotch towards a whole bunch of trucks and tons of explosions. Michael Bay approves.

Here’s modern mainstream rap on a nutshell: I can afford things normal people can’t buy and I can steal your girlfriend.

Rich nigga, I could never be a broke nigga (rich nigga)
Broke niggas I can never get along with them!

I’m pretty sure no one is born into wealth (unless your last name is Hilton or Kardashian/Jenner), so you’re basically dissing yourself. Your lyrics backfired.

Maybe people hate you because your rapping sucks. Just a thought.

Enough with the use of boxing for sex puns. It does not bring up any good imagery.

Yeah, yeah. You can make it rain. You’re not saying something hundreds of other rappers haven’t said.

Rich niggas on the right all night (rich nigga)
Broke niggas to the left by yourself (brokanese)
Now who the hell just said that the roof on fire?
Call 911 like Wyclef

Don’t you just love it when rappers insult their audience with lines like this?

I’m a rich nigga, I don’t like a bitch nigga
Nigga broke nigga, I don’t deal with you
All of my niggas, official, My bitches they strippers
My niggas they criminals trying to get to the M&Ms

Here’s more of modern mainstream rap in a nutshell: insulting people with less money than them, claiming to know criminals and strippers, coupled with forced rhyming or not rhyming anything at all.

If your bitch is so innocent, why she sucking my children
Last time I asked I dine and dashed and bitch I go in the building

Uhh… That’s not something to be proud of. A woman making sexual contact with children. She should be in jail right now because she is a fucking pedophile.

Oprah doesn’t even like rap music. I doubt she’ll ever do an interview with you hoodlums.

Bottles in the VIP while I stand on the sofa
I don’t speak your language Brokanese, I thought I told ya

Look. I know rapping isn’t easy, but at least know how to rhyme. Get yourself a rhyme book or use the Internet. You got access to resources that can help your rhymes. Oh, who am I kidding? You’re still gonna do the same shit.

Geeked up in the Double R, I scare ya bitch, Freddy Krueger
Flooded Franck Muller

That would suggest she ran from you. Scaring chicks off isn’t something rappers would brag about. Basically, your line backfired on you. *sigh* Fuck this.

This song is 12 rounds of misses and no hits. If you wanna know how low the quality of Migos’ music are, this song represents it well. A weak, limp-dick beat, boring brag raps, and non-stop stupidity. These bozos are the epitome of incompetence. I will never understand what records labels see in these talentless douchebags or why anyone would associate with them. My guess is that people will latch on to anything considered catchy, no matter the quality levels and that’s fucking sad. It sends a bad message to upcoming rappers that you don’t need to be a good rapper to make it, just make catchy shit and people will like it. I’m not saying that every rapper should be super-lyrical (because there is a time and place for everything), but lyrics are an important part of being a great rapper. This attitude of ignoring rap lyrics is why the quality of hip-hop music is declining. Talented rappers whose music contains effort, creativity, and a message outside of the tired luxury/gangsta rap tropes or a more unique spin on those tropes are being pushed aside in the mainstream for the same spoonfed bullshit that’s currently generating money for the labels. The only way for hip-hop to continue thriving is through variety and innovation. By supporting artists like Migos, you’re holding back that innovation and are causing less variety in mainstream hip-hop, meaning less people will know about some great rappers/records. If you’re going to continue contributing to the problem instead of contributing to the solution, then all I have to say is go eat a bowl of dicks. Bitch.

Next Target Practice, we shake a tailfeather with Nelly.

Come and Get Your Love-Redbone

Just Give Me A Reason-P!nk ft Nate Ruess