Welcome to Target Practice where bad popular songs of the past and present get shot. Nelly was one of the most successful rappers from the early 2000s not named Eminem. Straight out of St. Louis, he crafted his own unique style and rode it to superstardom. In terms of quality, Nelly was FAR from the best rapper, but he’s not bad, either. Like Ludacris, he had a lot of personality and wit, which allows him to get away with a bunch of ridiculous lyrics and he stuck to doing mostly dumb party music, which he was good at. He always seemed like a cool guy to hang around with at parties. That’s the reason why I could never hate on him because he stayed in his lane and I got nothing but respect for him for that. But even Nelly has his share of bad songs, which brings us to today’s Target Practice which was made for the soundtrack of Bad Boys II and features marketing whore P. Diddy and member of Nelly’s crew The St. Lunatics, Murphy Lee. This is Shake Ya Tailfeather. 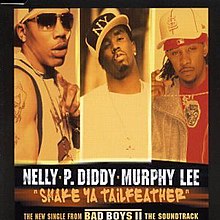 I’m going to skip the intro and get into the first verse, which comes from Nelly.

Come here girl
What your name is?
Where you from?
Turn around who you came with?

So Nelly is trying to talk to a woman who is clearly ignoring him. Goes to show that even with money and fame, you can still get rejected.

Is that your ass or your momma half reindeer?
I can’t explain it but damn sure glad you came here

Half reindeer? Jesus. Thanks for that imagery.

I’m still a sucker for cornrows, you know I never changed that (nah uh)
Your body is banging mamma, but where your brains at? (Come on)

You’re basically one step closer to calling her an idiot. Real smooth.

Here come another man
Unlike no other man
Candy coated whoa!
Switching every other lane

Yeah, you’re not getting away with that forced rhyme, Nelly. I don’t care what dialect you speak.

Okay, now you didn’t even try to rhyme anything here.

So you’re into girls with Blount’s disease. Hey, if that’s what you’re into, I’m not judging.

Basically, you like every ethnicity. Just say that and you’ll save everyone’s time. At least you don’t claim to not have a type like some people *coughs* Rae Sremmurd *coughs*.

Manolos are designer shoes (don’t ask how I know, I have Google like everyone else). Nelly doesn’t care if a woman’s shoes are real or fake. I feel you, bro. Well, that verse was over, so do you want to see the chorus of this song?

This is the chorus, combined with the Atlanta Braves tomahawk chop (which is also how the song starts). If you listen to it, you get a whole bunch of vocals clashing alongside the production. It’s like they want to put as much noise into the chorus as possible. This chorus could give Bang Bang a run for its money. For those who don’t know what the tomahawk chop is, here it is.

Next up is P. Diddy.

Looks like Diddy is talking to a stripper. Of course, he would.

Enter the floor (Uh) take it low (Uh) girl do it again (Uh)
You know I love that (I love that)
Now where them girls at? (Where the girls at?)
It’s Diddy, Murphy Lee, and Nelly how you love that? (Shit uh ohhhhhh)
Come on, we got another one player
From New York to the Dirty how they loving it player?

Look at what I previously said. And in terms of loving anything involving this song, I don’t.

Baby you impressive let’s get
To know each other
You the best of the best and
You got to love it in the dresses, the sexiest

Too late for all of that, Puffy. She is a stripper. I’m sure a long-lasting relationship is the last thing on her mind.

I bet you say that to every woman you meet.

It was the early 2000s. One of the trends during that time was women wearing low-hanging pants with exposed thongs that looks like it might be riding too much into their crotch. Dudes were obsessed with women who wore thongs. There’s even a song dedicated to them.

It’s Bad Boy and Nelly man somebody better warn them

Yes. Warn somebody about this song so they can change the station. Now to the final guy, Murphy Lee.

Yo, I’m the big booty type
I like them thick with their mind right (Awe)
Banging personality conversate when the time right (Naw)

No. You can’t do this. Talk about a woman’s physical traits and then talk about her personality. “HEY, LIL’ MAMA. YOU GOT A FAT ASS. BUT YOU ALSO SMART.”

I’m not hard I’ve got women to handle that

I’m just a juvenile (Wha)
Because I be about G’s
Keep your women wezzy man they say they have my babies
I’m young like Turk, like the cash and the money (I’m going to eat my money)
Man, I’m that damn hungry
See I’m starving like Marvin girl

We get it. Juvenile, B.G., Lil Wayne, Baby (or Birdman), Turk, Cash Money Records. They’re not that clever. Enough already. Wait. You’re gonna eat your money? WHY?! Use it to buy yourself some damn food, you lazy bastard.

Why does every rap song have to mention drug-dealing in some form or way? Even in a fucking party song, there has to be some reference to drug-dealing. Now I see why they put you last, Murphy Lee. You could easily be cut out and nothing of value would be lost. Not that there was any value in the first place.

This song is a chicken coop of chicken shit. This is easily one of Nelly’s weakest hit songs. The production is busy and clattered with a bunch of sound effects mushed together. The lyrics are filled with dumb pick-up lines, unfunny puns, forced rhymes, or not rhyming anything at all. Nelly was underwhelming, P. Diddy is being P. Diddy, and Murphy Lee was just bad, he was easily the worst part of the song overall. Not only did this song go to number one, but it also won a Grammy. A Grammy. That pretty much tells you they don’t know shit about rap music. This will be the last Target Practice on a hip-hop song for a while because I need to bring some attention to other genres. Next Target Practice, I review a song from one of The Voice coaches.

What Would You Do-City High