While remnants of the 80s would still stick around, 1992 is pretty much where the 90s officially begins. This was one of the best times for R&B music as the genre pretty much conquers the Year End Hot 100. Even more hip-hop songs started showing up as did house music. In spite of grunge making its impact on pop music thanks to Nirvana, rock music in 1992 was pretty underwhelming with some exceptions. Compared to 1990 AND 1991, 1992 is pretty much the superior year when it comes to quality pop music. But this isn’t a list about good music, it’s about bad music, so let’s just get on with it.

I never really cared for Amy Grant as she’s another one of those contemporary Christian artists. She had a lot of hits back in the early 90s, including Good For Me. My problems with this song aren’t the lyrics or the content, which are okay, but it’s the sound and instrumentation. This song is the perfect representation of most adult contemporary records of its time. There’s enough cheese in this crap to feed an entire family of mice and rats for a lifetime. Amy Grant was never that great of a singer to me. The production is a mess; we get a mixture of different sounding synths, percussion that’s too tight, a barely-audible bass line, and a weak ass organ/guitar solo. This song could have only been made in the early 90s and more than 20 years later, it has aged worse than an alcoholic, chain smoking Vegas showgirl.

In 1992, Fox aired a show called The Heights, which is about a band of the same name trying to be famous. It was a flop from the start with horribly low ratings and it got cancelled after 12 episodes. Ironically, the show’s theme song, How Do You Talk To An Angel, became a number one hit. And yet the song sucks. This is a laughable excuse of a song with lyrics that fit in perfectly with the WGWAG category, only being backed by generic pop rock instrumentation carried by a weak guitar riff, plus, a saxophone that pops up at random times and won’t shut the fuck up. This is the type of song that college douchebags sing on their acoustic guitar in the hopes of getting laid. No wonder The Heights TV show never caught on if crap like this was attached to it.

And now we take another dive into the pool of mediocrity that is Bryan Adams’ music catalog. This time around, we’re looking at Do I Have To Say The Words. This song just doesn’t sound good to me and I’m not sure why. Maybe it’s Adams’ weak, raspy singing voice failing at a Springsteen impersonation. Maybe it’s the instrumentation, which is mostly synths, keys, strings, and percussion combined with a barely-there guitar and a butt-ugly bassline to make an over polished sound. Maybe it’s the underwritten lyrics about love. Maybe it’s all of these things combined to make another crappy ballad. Yeah, that’s it. Good job, Bryan Adams. This is no (Everything I Do) I Do It For You, but good job, nonetheless.

Even though I enjoy 90s R&B, I, for the love of God, can’t stand Tevin Campbell. This guy wants to be Michael Jackson so bad and it just rubs me the wrong way. He’s basically what happens if Chris Brown and Jason Derulo fused together and went back to the 90s. Tell Me What You Want Me To Do has a lot of things that makes me not like this guy’s music. A generic love song with barf-inducing production and irritating vocals, especially during one part where he hits a high note that sounds like he was castrated with no anesthesia. I refuse to believe that any male would hit a note that high, even Prince didn’t sound like that. In spite of my feelings about this guy, I find it very funny that he did two songs for A Goofy Movie soundtrack that I ended up liking.

Disney’s Beauty And The Beast is one of the best animated films of all time. It’s a visual and narrative masterpiece that everyone who saw it loved it and/or gave it praise. It became the first animated film to receive the Academy Award nomination for Best Picture. One of the most memorable moments of the film is the ballroom scene. The Beast and Bella dancing while Mrs. Potts sings the title song, which compliments the scenery and animation. So what boneheaded executive at Disney smoked a pound and thought it was a good idea to make an adult contemporary version with Celine Dion and Peabo Bryson? The movie version is perfect, there was nothing in that song that needed any changes. The singing and the instrumentation fits. This shit smear is unnecessary. Let me make one thing clear: I don’t hate Celine Dion. She is a good singer, but I’m very indifferent to her work and this song isn’t helping matters. Celine overdoes it vocally and Peabo is just weak and was easily blown out the water by Celine. The production is the same adult contemporary crap that’s infested the airwaves back in those days. You wouldn’t even know that this was supposed to be a Disney song if you heard it. This is easily a case of “if it ain’t broke, don’t fix it.” 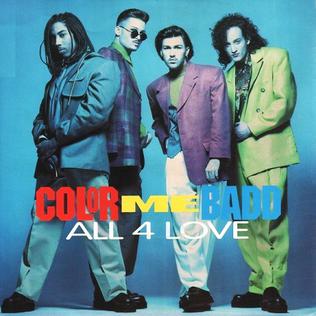 I don’t really hate Color Me Badd. Don’t get me wrong, I do think most of their songs don’t rise above mediocrity, but they’re not as bad as people make them out to be. However, you are not gonna find me defending All 4 Love because it’s trash. The badly-mixed rinky dink piano, horns, and clipped percussion of the production sounds like a disastrous mixture of new jack swing and doo-wop. I can’t even take this song seriously thanks to this sound. While I think the men of Color Me Badd are good singers, something went wrong with this song because the singing here is insufferable. Everyone sounds like they were singing through a tube. With songs like this, it’s easy to see why people would rather forget about Color Me Badd.

I will never pass up an opportunity to bash Michael Bolton. I endorse any Michael Bolton slander because he deserves it for being a shit artist. You know something Bolton loves doing aside from bad AC ballads? Ruin R&B/soul classics with his covers. This time around, he takes on Percy Sledge’s When A Man Loves A Woman and he desecrates that song with his cover. His voice is as irritating as ever as he belts with no soul. He just doesn’t have the same sincerity as Percy Sledge and I don’t buy it for a second. The instrumentation tries to imitate the original song and fails miserably. Leave it to Michael Bolton to take a classic, rape the everloving shit out of it, light it on fire, and then piss on its remains. It’s like he secretly hates music from black artists, so he does his best to butcher their songs with his covers. All I can say is go to hell, Bolton. Go to hell.

This is a rap song about The Addams Family. I repeat: THIS IS A RAP SONG ABOUT THE ADDAMS FAMILY!! Do I even need to say anything else about this to tell you that it’s shit? Just listen to it. This isn’t even a song, this is a commercialized turd, a blatant advertisement for The Addams Family movie. Addams Groove is the sellout to beat all sellouts. If anyone wasn’t convinced that MC Hammer was a sellout before, they sure are now thanks to this. Hammer’s rapping is still not that good and the production is weak and dated. The song is so bad, it won a Razzie for Worst Original Song (for those that don’t know, the Razzies are like the Oscars, but dedicated to bad movies instead of good ones). Hammer is basically like Puff Daddy, he has no shame whoring himself out for cash and fame and as we’ll see later on in the decade, it will cost him.

The drunken one-night stand that country music would love to forget about AKA Billy Ray Cyrus’ Achy Breaky Heart. What is there to say about this song? It’s a stupid pop-country song that’s more corny than a cornfield. Billy Ray basically plays up the guy who tells a chick that she can do anything to him that’ll hurt him physically, but he doesn’t want his heart broken. The production doesn’t fit the content and lyrics, it’s too upbeat and sounds more like something for a party. A classic case of mood whiplash. Billy Ray as a singer is just bland and he doesn’t do anything to stand out from other male country singers. He would eventually be a one-hit wonder (in the eyes of the pop charts, anyways) and was delegated to D-list status. Looking at Miley now, it’s safe to say that the apple doesn’t fall far from the tree in terms of shitty music.

This was an easy choice. Right Said Fred, AKA the LMFAO of the 90s, have scored the number one spot with I’m Too Sexy, which shares a lot of parallels with Sexy And I Know It. You know those beefed-up douche-holes who takes mirror selfies shirtless and post them up on Instagram or Twitter and brag about how awesome they are along with something like #GymFlow? Imagine one of those douche-holes recording a song. That’s what I’m Too Sexy is. A douchebag bragging about his sex appeal for nearly three minutes over a cheap house beat. Even worse is that the guy isn’t even singing this or rapping it. He’s just talking in a deep voice like he’s mocking someone and that makes him even more unlikable. This song was made for tantrum-prone meatheads who injects steroids into their ass cheeks. This is music for dickheads who flirts with any woman with large tits and ass, even if they’re already in a relationship. This is literally the theme song to Jersey Shore. This song IS Jersey Shore in a nutshell. Congratulations to I’m Too Sexy for being the number one worst song of 1992. Celebrate that, you fucking douchebags.

What They Do-The Roots