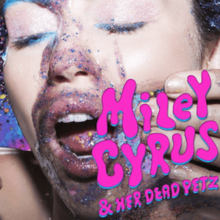 Jesus ass-fucking Christ. I… I don’t even know what to say about this. Words have escaped me. This album is a special case, people. I just want to take this time out to do something unorthodox and apologize to Bangerz. That album was not as bad as I made it out to be. Don’t get me wrong, it’s still shit. But it is fucking Ray Of Light compared to Miley Cyrus & Her Dead Petz. Never have I thought that Miley Cyrus could make a record worse than the last one she made, but she miraculously figured that out. I could describe this album by using every word in a thesaurus that also means excrement. So MTV recently had their Video Music Awards, AKA the “WE STILL CARE ABOUT MUSIC, EVEN THOUGH WE DON’T PLAY MUSIC VIDEOS ANYMORE” circus. I didn’t catch it because I didn’t care for it. During the time the VMAs were on, I was watching The Walking Dead and I found out what went down by looking at Twitter. Basically, another uneventful, safe, predictable show with the only noteworthy things that happened was Nicki Minaj calling out Miley and Kanye Kardashian announcing that he was running for president in 2020. I’m getting sidetracked. So Miley hosted the event and she used it as a platform to announce the release of a free album available for streaming on Soundcloud. And I think it’s for the best because no one deserves to spend a penny on this wretched dog guano. I want my wasted time back.

So let’s talk about the cover first. It’s a close up of Miley’s face and she got what I think is paint and glitter on her. It looks like she got jizzed on by The Care Bears and My Little Pony at the same time. This is a red flag letting us know that we’re entering a hazardous environment. I’m aware of the old saying that you shouldn’t judge a book by its cover, but do you really expect anything good coming from a record with this artwork? Let me explain why this shit blows so much. First off, this album has 23 TRACKS, clocking in at 92 MINUTES. Goddamn. Do you really need that many songs? If you’re gonna have an album that long, it better be some elaborate concept record, not just a collection of songs about the same shit. That is just wasteful. At least with a lot of Janet Jackson’s albums, half of the tracks were interludes. Dead Petz only has a few interludes. You could have cut half of this record and missed nothing important. The number of songs on this record combined with the length makes for an excruciating listen where I’m just looking at the time and asking if it’s over already. In short, the record DRAAAAAAAAGS!! And the production. My goodness, this production is a mess. It’s like she’s trying to combine dream pop with the worst aspects of psychedelic rock and trap and it resulted in an unpleasant sound. Most of the production is done by The Flaming Lips, who I think is an overrated band, and Mike Will Made-It, because of course he’s involved. There’s a billion effects put on Miley’s voice, making her sound as inhuman as possible. There are times where Miley just rambles about shit and I’m just begging for it to end. Most of the songs are about either smoking weed, partying, having sex, or some random nonsense. Hell, there’s even a song about a fucking blowfish. Wow. The first song, Dooo It!, is the perfect representation of the shittiness of this album. We get it, Miley. You like to get high and fuck. What you’re doing is not new. It got old the 100th time. She’s acting like she’s made this great discovery and wants everyone to see it. The guest features are wasted here. Ariel Pink, Sara Barthel of Phantogram, and Big Sean didn’t help this album at all. Hell, nobody could have saved this shit typhoon.

I went into this record expecting a train wreck and I got something worse than that. As much as I can’t stand Miley’s last album, at least she was trying to make something good. Be it she fails at it, but she tried. This new album, on the other hand, she didn’t even try at all. This record lacks focus and cohesion. It’s WAY too long and has WAY too many tracks. This is the most watered-down psychedelia I have ever heard and, unsurprisingly, it’s from someone known for cultural appropriation. It stinks of a vanity project from a privileged, spoiled brat with too much time on her hands, who doesn’t even know who she is and tries to wear too many hats and none of them fit well. Of all the records I’ve heard this year, I can safely say that this pile of elephant dung might be one of the worst albums I have ever heard. It’s on the same level as Sremmlife and YRN. Yeah. THAT bad. I give Miley Cyrus & Her Dead Petz a big fat F. Avoid this audio abscess like it’s the plague. Go listen to something else. Anything but this. Go check out The Weeknd’s new album. It’s pretty dope. As for Dead Petz, I’ve said my peace about this shit and I don’t want to talk about it anymore.