Welcome to Target Practice where bad popular songs of the past and present get shot. I’m a huge Beatles fan. Like a lot of people, I consider them to be one of the best music acts in popular music. Decades later, their influence on the music industry is still present and is only rivaled by that of Michael Jackson. When they first came onto the scene in the early 60s, they were doing covers and simple pop songs aimed at teenage girls. Later on in the decade, they started making music that would become more influential to future generations of artists like Sgt. Peppers, Revolver, Rubber Soul, and Abbey Road. As great as The Beatles can be, their catalog isn’t completely perfect. This brings us to today’s Target Practice, which is considered to be one of the worst songs that The Beatles has ever made. But is it? This is Ob-La-Di, Ob-La-Da. 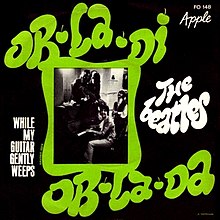 So the story is that Desmond, who works at a market place, meets Molly, who’s in a band. They both tell each other that they like each other’s faces. That’s… strange. Maybe telling someone that you just met that you like their face was a thing in the 60s. Imagine doing that now.

*woman walks away as guy follows*

guy: We should date.

woman: Eww, get away from me, you creep.

woman: I said go away or I’m calling the police. *kicks guy in the crotch*

guy: (in high-pitched voice) She digs me.

Desmond takes a trolley to the jewellers stores
Buys a twenty carat golden ring (Golden ring?)
Takes it back to Molly waiting at the door
And as he gives it to her she begins to sing (Sing)

Now Desmond has bought a ring for Molly. Moving a little quick there for someone you just met. Can’t you just wait until you get to know Molly first, see what she’s like as a person? Again, maybe it was just a different time.

Now Desmond and Molly are married, have a house of their own, and kids. That’s the American Dream, right? Although this was written by a British band.

Happy ever after in the market place
Desmond lets the children lend a hand (Arm! Leg!)
Molly stays at home and does her pretty face
And in the evening she still sings it with the band

“Listen, you little nuggets. In life, you gotta work for what you want and need. Now get your asses in there and arrange those oranges.”

Yeah, happy ever after in the market place
Molly lets the children lend a hand (Foot!)
Desmond stays at home and does his pretty face
And in the evening she’s a singer with the band

Yeah, they fucked up here. From what I’ve read, The Beatles kept this mistake because they liked it. And because they’re The Beatles and they could do whatever the fuck they want.

This song… actually isn’t that bad. This is the song that people considered to be one of the worst songs ever? I mean, sure, the lyrics are silly and cheesy, but there’s a certain charm to it that prevents it from being hate-worthy. The instrumentation is pretty damn good with some ska and reggae influences. There’s more to like about this song than dislike and I do believe that’s it’s overhated. Hell, I can safely say that I like this song. Yeah, it’s not in the upper echelon of great Beatles songs, but they’ve done worse than this. Next Target Practice, we look at a song that proves why putting “-licious” at the end of everything is fucking stupid.

Because The Night-Patti Smith Group