Welcome to Target Practice where bad popular songs of the past and present get shot. Let’s talk Lee Brice. He started off as a songwriter for several country artists before releasing his debut album Love Like Crazy back in 2010. My first exposure to Lee Brice isn’t exactly a positive one since I first heard his single I Don’t Dance, which I thought was lame, dull, and boring as shit. Now, some people have given me flak for this opinion (looking at you, Halston) and pointed me to today’s Target Practice, which they said was worse. Is it? Well, let’s find out. This is Hard To Love. 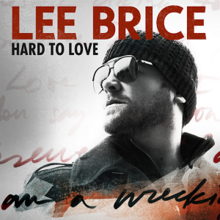 I am insensitive, I have a tendency
To pay more attention to the things that I need.
Sometimes I drink too much, sometimes I test your trust,
Sometimes I don’t know why you stay with me.

So he admits to being a selfish, alcoholic asshole who really shouldn’t be trusted. Well, that tells us everything we need to know. Review over.

This song is… I’m just fucking with you. There’s more lyrics that we need to get to, so let’s continue.

I want to ask a serious question to the woman in question: why are you with this dude? He’s clearly not someone you want to pursue a relationship with since, like he said, he’s hard to love. And that last line is just bad. I’m starting to sense some Stockholm Syndrome.

I am a short fuse, I am a wrecking ball
Crashing into your heart like I do
You’re like a Sunday morning, full of grace and full of Jesus
I wish that I could be more like you.

So you have a short temper. I can just imagine him at a bar and he gets pissed off and start a fight if the bartender gets his order wrong. Also, bringing up Jesus doesn’t help anything.

Girl, you’ve given me a million second chances
And I don’t ever wanna take you for granted,
I’m just a man, I’m just a man

And in her mind, she’s starting to question that decision. Wait. So the reason why Lee Brice is acting the way he does is because he’s just a man.

This song is a hate-filled pity party. Goddamn, this is Crash And Burn all over again, only worse. This dude admits to being “hard to love,” yet he doesn’t do anything to change that. The one thing you’re supposed to do when you admit your faults is to fix them and there’s nothing in this song that suggests that he’s gonna fix his ways. He won’t stop drinking and he won’t stop having violent outbursts. The worst part of this is that the woman still loves him, which further validates that this sounds like an abusive relationship. Since the dude isn’t gonna change, she should just leave him because this relationship isn’t healthy and it makes it look like she has Stockholm Syndrome. Jesus Christ, this is worse than I Don’t Dance. Despite my feelings for that song, at least it wasn’t… THIS!! Next Target Practice, Nickelback. Just Nickelback.

When A Man Loves A Woman-Percy Sledge

Georgia On My Mind-Ray Charles

(Sittin’ On) The Dock Of The Bay-Otis Redding

One thought on “Target Practice: Lee Brice “Hard To Love””