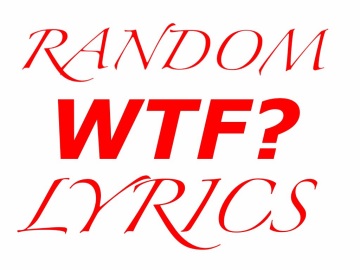 Welcome to Random WTF Lyrics where I pick out six random bad lyrics from six random songs. Let’s get started.

Forget about the game, I’m a spit the truth, I won’t stop till I get ’em in they birthday suits.

So Luda won’t stop rapping until some chicks are naked. That might work if you’re in a strip club, but elsewhere? If the chicks don’t get naked, then you’re just rapping nonstop to the point where you end up like this.

Half Of My Heart-John Mayer & Taylor Swift

So this song was written back when John Mayer and Taylor Swift were an item and it’s about each other. Now they’re no longer together and this song’s existence is now a joke. Funny how time works.

And because you only gave her half of your love, Taylor is no longer with you, Johnny boy, and she wrote a bunch of songs about you to fame and success. To say you screwed up would be stating the obvious.

I want you to guess what this song is about.

Are you saving that dessert for me?
Cause if you are baby
You know you could work for me
The way you do it causing jealousy

Chances are your first guess is correct unless you were thinking of actual dessert. I think it’s time for songwriters to stop using food as a metaphor for genitals because it’s not sexy at all. I don’t want to think about vagina while eating tacos, I just want to think about how delicious the tacos are while I’m eating them. I just hope that this doesn’t become a thing…

So this happened. So many things on my mind about this song, first one being, “how the fuck did Buckley find this piece of shit?” Basically, Manika decides to become a lesbian because she’s had some relationship problems with men. Because that’s how being gay/lesbian work, they chose to be that way. This shit is a South Park parody that doesn’t even know it’s a South Park parody.

Damn did I really fall for that again?
It’s like men
All they ever do is pretend
That they love you
But they just fucking with your mind
And another chick at the same time
Damn, I’m so sick of men
I might go lesbian

“BOO-HOO!! A MAN SCREWED ME OVER!! IT’S ALL THEIR FAULT!! ALL THESE MEN ARE THE SAME!! I’M DONE WITH THEM!! I’M GOING LESBIAN FROM NOW ON!!” This is what you’re sounding like, a male-bashing, misandric bitch who blames the entire male population for you dating some shitty guys. And look at who’s featured on the song to try and make guys look good, Tyga, a rapper who basically confessed to pedophilia on-record. Wanna know something funny? Imagine if the gender roles were reversed and it was a guy singing about becoming a homosexual.

Heartbreaking as fast as they can

I’m so damn sick of women

Will Smith was right on the double

’cause these bitches ain’t nothing but trouble

First, they say they love you and wanna be your honey

Then they stab your heart and wanna take your money

So there’s one thing I might do, fuck a dude

I walk around the club, fuck everybody

You heard that right. When Lil Wayne is in the club, he has sex with everybody. Man, woman, transgender, it doesn’t matter to him as long as there’s a hole for him to lubricate his man meat.

I take sacks to the face whenever I can