Welcome to Target Practice where bad popular songs of the past and present get shot. Jadakiss is a New York rapper who was one-third of the group The LOX, signed to Bad Boy Records where they released one album before leaving and moving on to Ruff Ryders, the home of DMX. They made more hardcore music that appealed to the streets, which explains why they didn’t stay at Bad Boy, a label known for more mainstream-friendly songs, that long. Each individual member of the LOX would eventually start their own solo career, Jadakiss especially. His biggest hit to date is also today’s Target Practice, a song that asks the most important questions that every American has been asking. Featuring Anthony Hamilton, this is Why. 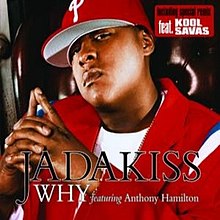 Yo, why is Jadakiss as hard as it gets

Why is that the first question on your mind? Why would anyone care about how hard you are? Wow, that last question came out wrong.

Why is the industry designed to keep the artist in debt

That, actually, is a valid question because the music industry is designed to benefit the record labels more than the artists and you do hear stories about artists getting screwed over, especially the big names.

Why do you are about a bunch of gangs who do nothing but destroy?

Yea, and why they gon give you life for a murder
Turn around only give you eight months for a burner, it’s goin down

Because murder is a serious, horrendous crime?

Why they sellin’ niggaz CD’s for under a dime

CDs for under 10 cents? What bootleggers are you going to?

Umm… wasn’t this song supposed to be about something? Why are you talking about dudes walking around with a gun on them?

Why my niggaz ain’t get that cake

Maybe because they fucked up and got arrested?

How would you know that brother is better than Jordan? Have you’ve been watching prison basketball games? Actually, that would make for an interesting TV show. Somebody should make that a thing, Prison Basketball. HBO, get to it. You don’t have to credit me.

Why you ain’t stackin’ instead of tryin’ to be fly

Isn’t that the same thing?

Why do you care about snitches? And is that a death threat?

Why they kill Tupac n’ Chris

The more important question is who killed the both of them.

Why do you care? Let that person get drunk in their own way.

Calling a rape victim a whore. Nice going, Jadakiss. You just exposed yourself as an insensitive asshole. Let’s move on to Anthony Hamilton.

On a serious note, this is a pretty good hook and it’s all thanks to what it’s saying. Anthony Hamilton is commenting on a system that’s been against African Americans for hundreds of years, a system that views us as less than human, initially denied us of basic human rights, treated us unfairly with the justice system and law enforcement, giving us longer, harsher sentences than whites charged with the same crimes, thus, giving the U.S. the largest prison population of the world where a disproportionate number of inmates are black men convicted of drug possession (that stemmed from the pointless war on drugs in the 80s and early 90s), and other injustices. All of this has had a negative affect on African Americans living in the inner cities where they have to do anything they can to make enough money to buy groceries for a month (which isn’t helped by a shitty education system), plus, they’re living in an environment of drugs and gangs. This is why the Civil Rights Movement happened, why the Black Panther Party was formed, and why Black Lives Matter was formed. The institutionalized racism that’s a part of American history has put us in the situation that we’re in now and is still not going away as long as change doesn’t happen.

Well, that’s enough of that. Let’s go back to Jadakiss.

Oh. So you’re one of those conspiracy theory nuts who believes that George Bush was responsible for 9/11. Look, I don’t like Bush as much as the next guy, but you need to take off the aluminum foil hat, buddy.

Why Aaliyah have to take that flight

It is pretty sad what happened to Aaliyah.

Why do you care if someone would rather ride a bike instead of a Ferrari? They would get more exercise that way.

Why they gotta open your package and read your mail

What kind of creep goes around to random mailboxes and read people’s mail?

Because they’re in jail. If you’re in jail, you’re pretty much screwed.

Now THAT is a very good question.

Why a nigga always want what he can’t have

Because humans are naturally programmed to want things, even things that aren’t easy to obtain.

Why I can’t come through in the pecan Jag

Why not? No one’s stopping you from driving in whatever car you want. What, are you afraid of getting shot up for driving a pecan Jaguar?

Look back at what I said about institutionalized racism.

Why niggaz can’t get no jobs

You can thank Bush for that.

Why they come up wit the witness protection

To protect witnesses from criminals trying to tie up loose ends until trial?

Why they let the terminator win the election
Come on, pay attention

Good question. Why did we let Arnie become governor of California?

Because you’re not a mainstream artist. That’s why you’re not selling like Eminem or Jay Z.

Uh, yea, yo
Why Halle have to let a white man pop her to get a Oscar
Why Denzel have to be crooked before he took it

While the Academy Awards haven’t been doing a good job awarding black actors and actresses, *coughs* OscarsSoWhite *coughs* you do know that Denzel Washington won an Oscar for Glory before Training Day, right? I’m just saying, do some research first.

Why are you asking about a clutch for a Benz? And the person who said they don’t smoke is lying to you since he’s reaching for the blunt.

Why rap, cause I need air time

And you’re not doing a good job with that air time.

How broke do you have to be for you to be on the streets begging for beer money?

Why all the young niggaz is dyin’
Cause they moms at work, they pops is gone, they livin’ wit iron

Again, look back at what I said about the hook.

Why they ain’t give us a cure for aids

Oh, look. Another question that isn’t stupid. Anyone else noticing a pattern here?

Why are you bragging about the drugs you’re selling?

Why you screamin’ like it’s slug, it’s only the hawk

You’re asking why someone is screaming like they got shot (the slug) when really they got stabbed (the hawk). Answer, because getting stabbed hurts. A lot.

Why my buzz in L.A. ain’t like it is in New York

Because you’re a New York rapper. Of course, your buzz in LA won’t be as strong as New York. You don’t see Snoop Dogg asking why his buzz in New York isn’t as strong as LA. Actually he did, but that’s another conversation.

Well, there are a lot of fake thugs out there, especially on the internet.

Well… I don’t know about that. Some people might be turned off by your raspy voice.

So you’re saying that the reason that they make $20 bills is because you have all of the old ones. Tell me why I should believe that. This line is an example of Why’s problems.

This song is just… WHY? I’m sure Jadakiss had good intentions with this song and wanted to spread a message about the problems of America, but the overall execution is just terrible. He does raise some good questions here and there, but they’re outweighed by the sheer number of pointless and straight-up stupid questions that make up the majority of the song. Plus, he keeps going back to the same hardcore schtick that he does in his other songs about drug dealing, killing people, and material possessions. He just can’t seem to stay on-topic for the most part, which is disappointing because Anthony Hamilton’s chorus is the best part of the song and shows the potential that it has to be great. But instead, we have an example of conscious rap done wrong. You want good conscious rap? Talib Kweli, Mos Def, Common, Run The Jewels, The Roots, Lupe Fiasco, Kendrick Lamar, etc. Hell, even The Black Eyed Peas made a better socially conscious song with Where Is The Love. The Black Eyed Peas. Jadakiss, maybe it’s best for you to stick with what you know best because conscious rap isn’t for you. Next Target Practice, Women’s Month officially begins with a girl on fire.