Welcome to Target Practice where bad popular songs of the past and present get shot. It seems like I can’t stop talking about music of the 90s (especially since there’s one more list coming up later this month) and honestly, I’m fine with this. The 90s has proven to be a very interesting decade to talk about in terms of music since it was a melting pot for different styles, especially outside of Billboard, one of them being ska. I don’t really know much about the genre since I don’t listen to much ska, but I have heard plenty of Sublime, Less Than Jake, Reel Big Fish, and No Doubt. I am a big No Doubt fan. Tragic Kingdom is one of the essential 90s records you have to hear before you die (alongside Nevermind, The Chronic, Jagged Little Pill, Illmatic, Enter The Wu-Tang (36 Chambers), etc). Then came Hey Baby, which was a terrible, messy piece of crap that signified the band selling out. Little did we know that it was a precursor of what’s to come from frontwoman Gwen Stefani’s solo career, where she appropriates styles that are WAY beyond her range and doesn’t work for the most part. Today’s Target is her biggest hit to date and remains one of the most annoying pieces of music released in 2005, which is saying a lot. This is Hollaback Girl. 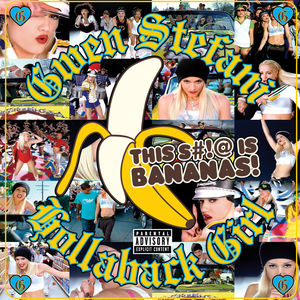 You ever get a feeling of dread when you listen to the first few seconds of a song? Yeah, I can imagine that’s how most people felt when listening to this for the first time.

Uh-oh. Don’t mess with Gwen Stefani because she’s been around that track and will kick your ass. Also, what the hell is a hollaback girl?

You know what I find funny about this line? Gwen unintentionally admits that this song is shit. Well, that’s something we can all agree on.

I heard that you were talking shit
And you didn’t think that I would hear it
People hear you talking like that, getting everybody fired up

Maybe they heard Hey Baby and thought it was terrible.

So I’m ready to attack, gonna lead the pack
Gonna get a touchdown, gonna take you out
That’s right, put your pom-poms down, getting everybody fired up

Gwen, are you trying to fight a cheerleader? Wow, they’re really desperate for this new Bring It On sequel.

So that’s right dude, meet me at the bleachers
No principals, no student-teachers
Both of us want to be the winner, but there can only be one
So I’m gonna fight, gonna give it my all
Gonna make you fall, gonna sock it to you
That’s right I’m the last one standing, another one bites the dust

Better question: why is Gwen trying to fight a high school cheerleader? This song was released in 2005, she would have been 35 at the time. The only thing I can imagine is that some high school girl called her an old lady.

cheerleader 1: Did you hear that new song from Gwen Stefani?

cheerleader 3: Yeah. She needs to, like, retire to an old folks home or something.

*car stops near cheerleaders and Gwen Stefani steps out*

cheerleader 2: What the fuck?

cheerleader 3: Is that Gwen Stefani?

Aaaaand we reach the part of the song that most people remember it for. So what was the whole point of this line? I’ll tell you the answer: outside of adding to the cheerleader motif of the song, abso-fucking-lutely nothing. This is just filler in comparison to everything else in the song, which is just… wow.

This song is a rotten banana covered in brown spots. Jesus Christ, Gwen. I knew No Doubt took a drastic nosedive in quality, but this? I didn’t expect this. This has some of the Neptunes’ worst production work to date. It’s just a bunch of marching instruments paired with oddly-placed drum machines and synths. Pharrell and Chad, you could do so much better than this. And it’s not made better by Gwen’s bitchy attitude. She wants to fight high school girls talking shit and she just comes off as lame. It’s really sad to witness. Any likability she had in No Doubt was instantly thrown out the window. And I still have no idea what the hell a hollaback girl is. Oh, and the music video is twelve levels of cringe. All I can say is that after Hiroshima and Nagasaki, we owe Japan another apology. Fun fact: this song was written in response to a Rolling Stone interview that Courtney Love did where she basically called Gwen Stefani a cheerleader. So yeah. You have Courtney Love to blame for this piece of shit. *sigh* Well, maybe there’s still hope for Gwen. Maybe her later singles will be much better…

Sometimes, being optimistic hurts. Anyways, next Target Practice, we look at a song from Beyonce.