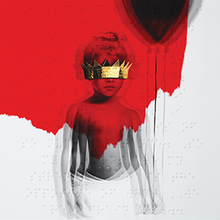 You know what I haven’t done in a while? An album review. So I decided to pick out a random album to review and since it’s still Women’s Month, I wanted to review something from a female artist this year and I went with Rihanna. Why? Well, it was either that or fall asleep listening to Rachel Platten or overcome frustration with Sia. What was it that I said about Rihanna albums? Hmm…

I didn’t listen to it because why would I? No one who isn’t a hardcore fan purposely listens to a full Rihanna album. She’s a singles artist and her albums are nothing but a collection of singles.

Well, that’s going to change because I just listened to ANTI on Spotify. I still stand behind her albums being nothing but a collection of singles and ANTI is no different. Because I’ve heard a lot of positive reception for this record, I decided to give it a spin on Spotify. What do I think of it? Well, you’ll see. Now, the last time I dedicated an entire post to reviewing album was…

So this time around, instead of ranting about the entire project, I’ll be doing a track-by-track review of each song, giving them a grade, and then give my overall thoughts on the album as a whole. Enough wasting time, let’s get started. This is ANTI by Rihanna.

Consideration ft SZA: So we start things off with Consideration, a reggae-esque track where Rihanna sings in her natural Barbados accent about doing things her own way, making the music she wants to make and not just what the labels want. This is a pretty good way to start the album, the glitchy reggae/dub production and Rihanna sounds comfortable here than in most of her songs, plus we get a feature from TDE’s own SZA. You couldn’t get more doper than that. I give this track an A.

James Joint: The second track is a pretty short interlude (at 1 minutes and 12 seconds) with jazzy keyboards and funky bass, creating a chill, atmospheric vibe. Meanwhile, Rihanna is singing about getting high and having sex. You know? Another Tuesday for Rihanna. I wish this was longer because this is pretty dope. But I’ll take what I can get. For now, I give it a B.

Kiss It Better: Now for the second full-length track of the album, the power ballad Kiss It Better, which is good. I like the production the most, it reminds me of a Prince song in the 80s with the synths and the guitars. I can imagine Prince making this song. This is another sex song and it doesn’t do anything new, plus, the lyrics are very repetitive, meaning the song repeats itself a lot. But the production makes me almost forgive it. This song screams hit single, so I genuinely hope Rihanna releases this as the next single or something. I give it a B and it’s all thanks to the production.

Work ft Drake: I’ve already talked about Work during one of my Top 40 Reviews, so go check that out to see what I think of it. I’m not gonna waste any time with this: it sucks ass and I never want to hear it again. NEXT!!

Desperado: Desperado is another song where the production is the highlight. The dark piano combined with the dusty drums and bass creates a sound that straddles the line between alternative and hip-hop. Meanwhile, Rihanna contemplates whether or not she should spend her time with a guy who’s clearly trouble and whether she should run away with him or not. This is one of my favorite songs off the record and I hope it becomes a single because more people need to hear it. I give it a A.

Woo: Outside of Work, Woo is definitely one of the worst songs on the entire album. The production is a mess, with the guitars sounding like they’re out of tune. I swore to God, I thought my computer was messing up when this song came on, but that’s just how it is. Then you add the unnecessary 808s and hi-hats and it’s just a clusterfuck. There is a ton of Auto-Tune on this, especially on Travis $cott’s voice, who’s featured on the song. This sounds like a Travis $cott song. Lyrically, it’s just another break-up song and I just don’t give a shit about it. This is a bad song. I give it an F. I hope the next track is better.

Needed Me: I couldn’t have been more wrong. Now we get to the sole song produced by DJ Condiments. To be fair to Mustard, he is trying to do something different with this production. It’s a shame that it’s a cluttering mess with that scattering muted synth, the weaksauce bass, and the overall lack of melody, all for a pseudo-female empowerment song that’s been done a million times before and offers nothing new. I give this an F.

Yeah, I Said It: The next track is a Timbaland-produced slow jam about doing the dirty. That’s pretty much the summary of Yeah, I Said It. Once again, the production is pretty good. The keys, the bass, and the synths create a very sexy atmosphere that’s perfect for lovemaking. My only complaint is that it’s too short at barely 2 minutes. It just comes and goes without you even knowing it. I wish it could’ve been longer because it sounds great. Oh, well. I give it a B.

Same Ol’ Mistakes: This next track is an interesting one because it’s basically a remake of Tame Impala’s New Person, Same Old Mistakes (which is a great song, BTW). I’m not kidding, this isn’t even a cover, it’s a remake. It has the same ethereal production and instrumentation, it has the same lyrics, and it’s sung the same way as well. I’m not sure how to feel about this. One one hand, the song does sound good, but on the other hand, it’s Rihanna lazily copying-and-pasting another song and not putting her own twist to it. I’m conflicted. For now, I give it a B.

Never Ending: Now we get to the acoustic guitar ballad Never Ending where Rihanna starts falling in love after a break-up. Something you might notice about the song is that the vocal melody is very similar to Thank You by Dido, a song that Eminem sampled for Stan. That’s a pretty cool detail to me to add to an amazing song. The instrumentation sounds great, the writing is pretty good, and Rihanna sounds good. Nuff said. I give it an A.

Love On The Brain: Now this is how you do a doo-wop-inspired track. This is much better than anything Meghan Trainor has ever made. This production is pretty amazing. The organ, the guitar, the strings, the drums, everything comes together to create a throwback sound that manages to sound modern while Rihanna, who sounds great here, sings about a destructive, toxic relationship (geez, I wonder why). This is definitely one of the best songs off the album and it gets an A from me.

Higher: And we have ourselves another weak track. The production sounds okay with the strings sounding like something out of a movie from the early 20th century, but it can’t save this. Rihanna sounds horrible here, especially when the song progresses and her voice starts cracking. It sounds like she got drunk before recording this and considering that the song is about getting drunk, points for realism. But it doesn’t make for a good listen. I give it an F. Next.

Close To You: Now we’ve reached the final track on the standard edition of the album and it’s a piano ballad (you ever notice that some albums always end on a piano ballad?) about moving from from an old love. The production and instrumentation is perfect even if it is the typical production of nearly every piano ballad. It has a sense of class and elegance (which is jarring considering the previous song, imagine the mood whiplash one must have) and is a great way to end the album. It’s an easy A for me. Now for some bonus tracks.

{Bonus} Goodnight Gotham: The first bonus track is nothing more than just a sample of Florence And The Machine’s Only If For A Night being played nonstop for nearly one and a half minutes. It’s repetitive as fuck and serves no purpose at all. Even the backing beat is pointless. I give this an F.

{Bonus} Pose: Oh, God, no. Not another strip club song. Rihanna, you’ve already done this type of song before with Pour It Up and it was terrible, so what makes you think this will be better? Anyways, Pose is just as bad as I expected it to be. It’s basically what happens if Pour It Up fucked Bitch Better Have My Money. This production is just horrid, it’s a mess of scattered noises and isn’t fun to listen to. The lyrics, of course, are garbage as Rihanna is singing about haters and how cool she is. Listening to this album, I thought she was past this crap, but I guess not. This also gets an F.

{Bonus} Sex With Me: Well, we’re finally at the last bonus track and I’ll give it this: it’s much better than the previous two. But that’s not really saying much as these bonus tracks don’t really impress much and this is no different. It’s just another sex song and it doesn’t really stand out. The beat is okay, the lyrics are by-the-book, and Rihanna doesn’t do much vocally that impresses. I’ll most likely forget about this song after hearing it. I give it a C.

So that was ANTI by Rihanna. Overall, I give it a B (counting the bonus tracks, it gets knocked down to a C). I admit, I went into this album with VERY low expectations. I expected not to like it, especially after Work, but the quality of these songs genuinely surprised me. The instrumentation and production are easily the best part of the album. It goes for different sounds and music styles and for the most part, they work pretty well. Content-wise, it deals with the same themes as nearly every pop and R&B album, love, heartbreak, sex. Rihanna herself is at her best vocally on this album, more so than any of her records before. It seems like she has complete control over her music and is doing the music she wants to makes. Sure, there’s some bumps on the road like Work and Woo and it’s not exactly a cohesive project, but it’s still pretty good for a Rihanna album and I think it’s worth checking out. If you’re gonna buy the album, though, I recommend buying the standard edition instead of the deluxe just to save yourself a couple of headaches. This week, look out for my Musical Appreciation on TLC’s Waterfalls.