Welcome to Musical Appreciation. The 90s was the best time for female hip-hop artists. Even with the popularity of gangsta rap (which isn’t very kind to women), the likes of Salt N Pepa, MC Lyte, Lauryn Hill, Missy Elliott, Queen Latifah, etc., found ways to succeed without the use of sex appeal and they were making more clever, thoughtful songs that women can be empowered by without any male pandering. Today, we’ll be looking at a record from one of these emcees. This is Queen Latifah’s U.N.I.T.Y. 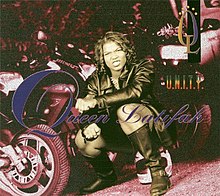 Most people now know Queen Latifah as an actress and a spokesperson for Covergirl, but didn’t know that she started off as a rapper. Queen Latifah arrived at a perfect time for hip-hop when it was embracing Afrocentrism. She was the epitome of black pride with her music and wardrobe. U.N.I.T.Y. remains her biggest single to date and damn it, is it a great one. Utilizing a jazzy sample of Message From The Inner City by The Crusaders and a spectacular sax riff into 90s hip-hop goodness, this laidback production is excellent and it still holds up to this day.

In this song, Queen Latifah attacks the sexism that black women receive constantly, especially from black men, and is taking no shit from anyone. She demands respect and those who disrespect her will be sorry. Every verse ends with her saying “who you calling a bitch?” and in the hook, she tells women that they aren’t bitches or hoes. In the first verse, she talks about a guy who grabbed her ass and called her a bitch and she responds with a nice fist to the eye. A bit extreme, but justified considering the dude is a sleazy dickhole. The second verse goes into detail about domestic abuse and how Queen Latifah isn’t going to tolerate that because of its toxic longterm effects on everyone. Any dude who puts his hands on a woman doesn’t deserve to be in a relationship. And then in the third verse, she calls out girls acting gangsta who really aren’t about that life, putting on a facade to impress their friends, yet when a situation goes down, they’re nowhere to be seen.

This song is clearly a response to hip-hop’s issues with women. It’s no secret that the genre is a male-dominated field. Shocking, I know. Couldn’t tell over the shiny music videos where half-naked models are shaking their asses while the rapper and his entourage are making it rain everywhere and mean-mugging and doing cool poses for the camera or the misogynistic lyrics where every derogatory term for women are thrown around like it’s common dialogue OR the fact that most of the best-known respected emcees are men. So imagine being a female rapper and you want to make it in the industry. Most likely, you’ll have to play by the rules and sell yourself as eye candy appealing to dumb horny dudes, throwing away any chances of you being seen as a respected emcee because people would rather jack off to your pictures and videos than listen to what you’re saying. You know something’s wrong when the two most famous female rappers today are known more for their butts than their actual music. That’s why I have more respect for 90s female rappers who did whatever they felt and why I respect Queen Latifah for this song.

So that was Musical Appreciation. Next time, we’ll talk about It Wasn’t Me.