Welcome to Musical Appreciation. You all remember Shaggy, right? No, I’m not talking about the Scooby-Doo character. I’m talking about the Jamaican reggae artist who blew up in the mid-90s thanks to Boombastic, a silly but fun player’s anthem. This dude is well known because no one can understand what the hell he’s saying. Then again, for most people who don’t understand Jamaican patois, a lot of artists like him are like that. Except unlike Young Thug, Shaggy doesn’t make me want to jab pencils into my ears. Anywho, we’ll be talking about his biggest hit to date, a song that inspired the Shaggy defense. This is It Wasn’t Me. 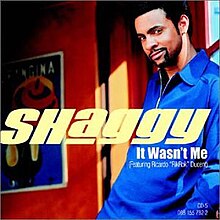 This is a really fun, simple song production-wise. Its simmering guitars, the cello stabs, and the funky bass and drums make for a sound that can appeal to both the pop charts and the Jamaican crowd. It’s the perfect crossover song. Even though it’s Shaggy’s song, the real start of the show is the featured artist, British singer Rikrok. Dude takes up 75% of the the entire song’s run. You’d think with that, along with how little time Shaggy gets, that this was Rikrok’s song. Don’t get me wrong, he was great here, but this is clearly an example of marketing deception.

On a surface level, this might seem like a fucked-up song about cheating and the guy denying it happened in spite of evidence that he did. But the real genius of the song is how it’s structured and framed. So Rikrok portrays the main character of the story and he’s talking to his player friend portrayed by Shaggy and wanting some advice from him because his girlfriend caught him cheating. Shaggy suggests to Rikrok that he lies to her even though, as I’ve said, he got caught. Basically, deny, deny, deny in spite of the evidence. In the end, Rikrok thinks that Shaggy’s advice is stupid and doesn’t make a lick of sense and he decides to apologize to his woman instead. This is a great counter-argument against the player role and it functions as a subtle satire of the lifestyle, pointing out how ridiculous it is and why you should never cheat. Who knew this simple fun song would be this deep?

So that was Musical Appreciation. Next time, we’ll talk about The Marshall Mathers LP.

I Hope You Dance-Lee Ann Womack