Welcome to Target Practice where bad popular songs of the past and present get shot. Everything has a fan base. Everything. Even the most horrific pieces of entertainment has some people who genuinely enjoy them in either an ironic or unironic way and that’s fine. Everyone has different taste. If you’re one of those people who has no problem with songs like Panda, NØ, Cake By The Ocean, and Work From Home, more power to you. Me? I’ll just look at them and go…

However, something rare occurs where nearly every single person agrees that a song is shit. And I’m not talking about songs like Rebecca Black’s Friday. Today’s Target Practice victim is what Zac Brown called the worst song he’s ever heard and Mark Grondin named it the #5 worst song of 2013. From the cancer of country music Luke Bryan, this is That’s My Kind Of Night. 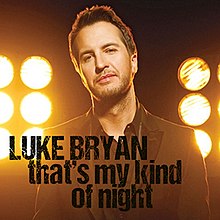 Rollin’ on 35s
Pretty girl by my side

You got that sun tan skirt and boots
Waiting on you to look my way and scoot
Your little hot self over here
Girl hand me another beer, yeah!

All them other boys wanna wind you up and take you downtown
But you look like the kind that likes to take it way out
Out where the corn rows grow, row, row my boat
Floatin’ down the Flint River, catch us up a little catfish dinner
Gonna sound like a winner, when I lay you down and love you right
Yeah, that’s my kind of night!

Get it? Because she’s a country girl. She’d rather go fishing out in the river than go downtown. Urgh, this hook is twelve levels of creep. Oh, and nice interpolation of Row, Row, Row Your Boat there. I’m sure the preschool demographic would appreciate that.

Might sit down on my diamond plate tailgate
Put in my country ride hip-hop mixtape
Little Conway, a little T-Pain, might just make it rain

My God, this is so lame. You have a mixtape that has Conway Twitty and T-Pain on it? Look, there’s having an eclectic taste in music and then there’s straight-up pandering. This song, along with many other bro-country songs, are trying way too hard to look cool and appeal to hip-hop audiences. Make it rain? Buddy, you’re not at the strip club, you’re at the fucking river. Who do you expect to pick up that money, the fish?

You can hang your t-shirt on a limb
Hit that bank and we can ease on in
Soak us up a little moonlight
You know I know what you like, yeah!

Swimming naked in the river. That’s totally not unsanitary. Also, you better hope that shirt stays where you put it because if some random animal decides to take it, it’s gonna be an embarrassing ride home for you. And in the cold night. Don’t even get me started on the shrinkage.

This song is crap. Every layer of this song just oozes of bro-country ickiness. The production is sterile as fuck and sounds like a mockery of country music with its synths, drum machines, and Auto-Tune. Luke Bryan is at his worst vocally as he sounds like Bender’s redneck cousin. And the lyrics are just as bad as he sings about a night with a country girl. Nearly every bro-country cliche is present in this song and have been made worse, especially with the hip-hop references. Country people, hip-hop audiences aren’t going to connect with you unless Snoop Dogg and Willie Nelson collaborate again. This is one of the worst “country” songs that I’ve ever heard and I’ve sat through Thomas Rhett’s entire Tangled Up album. God, this is horrible. Next Target Practice, we look at a song from a modern boy band and I’m not talking about One Direction.

Livin’ On A Prayer-Bon Jovi

Don’t Want To Fall In Love-Kyle