Welcome to Target Practice where bad popular songs of the past and present get shot. Boy bands. One of music fans’ favorite punching bags. What is it about these groups that causes so much scrutiny thrown at them? Is it jealousy or is it because they’re usually a group of four or five pretty white boys singing disposable cheesy love songs catered to an adolescent female audience? Who knows? As for myself, I can tolerate them for the most part. I was pretty young when the Backstreet Boys and NSYNC were a thing and I used to have the Millenium album, so I kinda have some attachment to them in spite of my growing music taste. In terms of boy bands in the 21st century, none of them are that impressive to me, not B2K, not the Jonas Brothers, not One Direction, not The Wanted, and especially not today’s Target Practice victim. From the appropriately named 5 Seconds Of Summer, this is She Looks So Perfect. 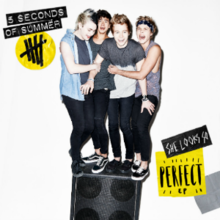 “Hey, we can’t come up with a way to start off the song, so let’s just say “hey” a bunch of times in the intro. It won’t be lazy or anything.”

Simmer down, simmer down
They say we’re too young now to amount to anything else
But look around
We work too damn hard for this just to give it up now
If you don’t swim, you’ll drown
But don’t move, honey

So if we’re going by this verse alone, this is a song about youthful rebellion, not letting the older establishment tell you what to do and what not to do because their ways are outdated. Because you are the future and a potential leader of a new generation. The feud between old and young is a timeless subject that resonates with every generation. Too bad this isn’t what this song is actually about as you’ll see.

You look so perfect standing there
In my American Apparel underwear
And I know now, that I’m so down

Here’s the line that many people criticized and made fun of 5SOS for, where a girl is wearing one of these dudes’ underwear. And yes, this line is just as stupid as people made it out to be. First off, I hope American Apparel is getting paid for this namedrop. Secondly, how did you get to the point where the woman is wearing your underwear? Do you just get off from seeing her in your undergarments? I bet you were also wearing her Victoria’s Secret panties while this is occurring.

Your lipstick stain is a work of art
I got your name tattooed in an arrow heart
And I know now, that I’m so down (hey!)

Congratulations for making a stupid decision. I hope you have enough money for a tattoo removal because if the both of you break up, you’ll regret having her name permanently inked into your body.

Let’s get out, let’s get out
‘Cause this deadbeat town’s only here just to keep us down
While I was out, I found myself alone just thinking
If I showed up with a plane ticket
And a shiny diamond ring with your name on it
Would you wanna run away too?
‘Cause all I really want is you

So what’s gonna happen if she says no while you’re holding the plane ticket and diamond ring? Not only would you have lost the girl, but now you’ve wasted God knows how much money and you’re in a state of depression.

A mixtape straight out of  1994, huh? I can imagine this mixtape would consist of a bunch of grunge, punk, and ska. Since there’s no more new lyrics from this point on, let’s end this.

This song is an imperfect mess of flaws. It’s a by-the-book, calculated, manipulative piece of forgettable music. The instrumentation is bad pop rock that tries its best to sound like Blink-182, all loud with no memorable melodies. None of these dudes are impressive singers and I can’t tell who’s who since they’re all screaming like they’re passing a kidney stone the size of a golf ball. And outside of the American Apparel underwear line, there’s nothing special about the lyrics since they’re your typical love song. 5SOS sounds like rock music made for people who hate rock music. With One Direction on hiatus, this is the only boy band left, let’s hope irrelevance hits them soon. Next Target Practice, we’ll look at a random song that’s currently in the Top 40.