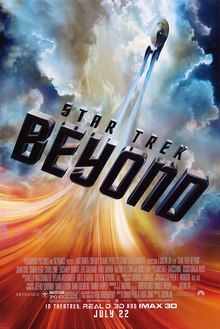 On September 8, 1966, Gene Roddenberry’s Star Trek aired on television. The deep-space travels of the USS Enterprise crew were chronicled in three seasons and 79 episodes. This show has become a pop culture phenomenon that has lasted for over 50 years with one of the most dedicated fanbases in all of geekdom and a profitable franchise with several movies, TV shows, games, comics, etc. In 2009, new life has been brought to the series with J.J. Abrams’ movie reboot, simply titled Star Trek, starring a new cast playing younger versions of the original Enterprise crew. The movie was a hit for critics and audiences and it’s currently the highest grossing film in the franchise. Its sequel, Star Trek Into Darkness, was… less than revered. I mean, it’s not bad, but it’s pretty much pointless. Now, there’s a third film, but instead of Abrams, it’s directed by Justin Lin, who’s best known for the Fast & Furious movies. Before I continue on, I have to get this out first: I’m not a huge Star Trek fan. My knowledge of this series comes from the movies. I never saw the original series or any other TV shows after it, so I’m the least qualified person to talk about Star Trek. This review will be coming from a casual viewer instead of a Trekkie. So how is this new movie? Well, let’s find out. This is Star Trek Beyond.

Let’s start things off with…

The USS Enterprise crew are three years into their five-year mission to explore the cosmos when they are suddenly attacked by an alien swarm that leaves them deserted on a foreign planet. The crew have been scattered around the place and have to reunite to escape, meanwhile, dealing with a threat who wants them dead. Even though I never watched the original series, I can imagine that this is how an episode of the series would be like. There’s action, tension, and character moments. Speaking of that…

As usual, we’ll start with the good guys. The cast from the previous two movies return: Chris Pine as Captain James T. Kirk, Zachary Quinto as Mr. Spock, Simon Pegg as Montgomery Scott, Zoe Saldana as Uhura as Leonard “Bones” McCoy, John Cho as Sulu, Anton Yelchin as Chekov, etc. What makes Star Trek stand out from other sci-fi franchises is the dynamic between characters and this film is no exception. Pine and Quinto do an excellent job as Kirk and Spock, honoring the characters that William Shatner and Leonard Nimoy made famous. Their scenes together were excellent, they play off each other well. Bones is the realist of the crew and he’s at his best playing off of both Kirk and Spock’s personalities. Scotty has some of the best lines in the movie, which makes sense as Simon Pegg was involved in the writing of the script. Chekov is one of my favorite characters in the film, he’s just so likable and it’s one of Anton Yelchin’s best performances ever and, unfortunately, his last before his untimely death. Uhura and Sulu were just… okay. Not great, not terrible, just okay. And that’s enough of the Enterprise crew. 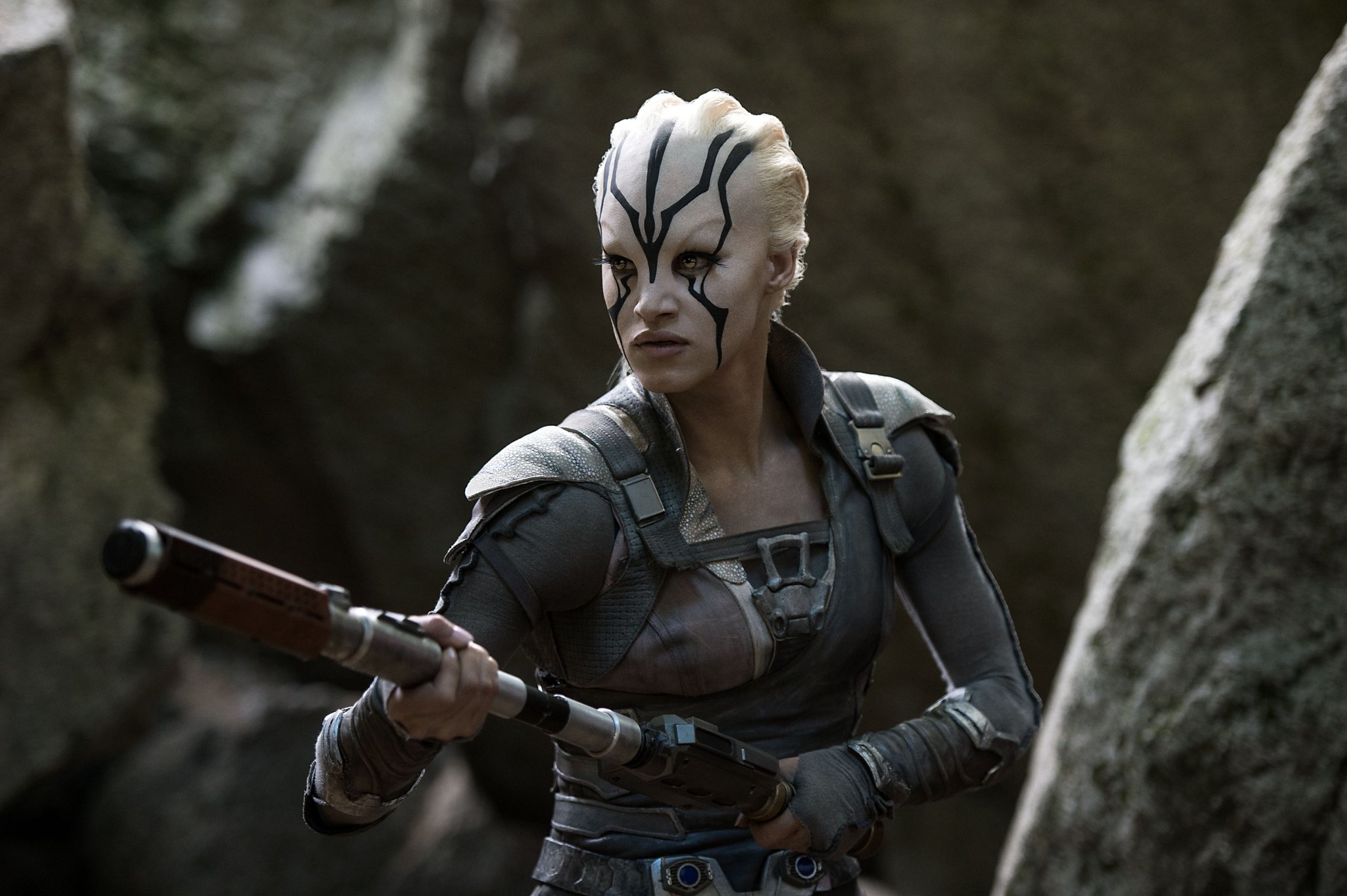 Now to talk new characters, starting with Jaylah, played by Sofia Boutella. She’s a total badass character with a unique design to her. The crew runs into her after being marooned and she assists them in escaping and battling Krall. I like the fact that they didn’t make her the cliche native warrior princess. Her backstory is really intriguing as she’s the only survivor of her own family who were attacked and imprisoned by Krall. Not only can she kick butt, but she’s also entertaining and has great chemistry with the Enterprise crew, especially in scenes with Scotty. I really want to see more of her in the fourth movie.

And now for the villain, Krall, portrayed by Idris Elba, who’s a great actor. Hurts to say, in spite of his cool design and menacing voice, he was easily the weakest part of the movie. He had no clear motivation: he wants to destroy the Federation because… reasons. His plan requires a bio-weapon that can disintegrate any organic matter that it comes in contact. And there’s a twist in the third act that reveals Krall to be the former captain of the USS Franklin who was the only survivor when the ship crash-landed on the same planet most of this movie takes place in. How he got mutated into Krall is not really explained properly. I’m just saying, this character needs some retooling so we know more about him and his motivation.

One thing that stands out about the rebooted movies from everything else Star Trek-related is the action. It’s more over-the-top and insane, and it’s all helped by the visuals, which are distinctively Star Trek with some impressive use of CGI. In Beyond, we get a lot of that action (but with less Abrams lens-flare) and it doesn’t fail to deliver. These scenes are very intense and fast-paced, always keeping you on your feet from the alien swarm attack on the Enterprise to the assault on Krall’s base. The third act is a bit underwhelming for me where the Enterprise crew have to prevent Krall from using the bio-weapon against the Federation. What is it with modern blockbusters these days having a weak third act?

I give Star Trek Beyond an 8/10. I think I like this movie the most out of the rebooted series. It combines the things that people love about Star Trek with the best of a modern blockbuster. The Enterprise crew were great as usual, the action is exciting, the visuals are A1, and it does a great job at paying tribute to both Leonard Nimoy and Anton Yelchin. Aside from being the best out of the new movies, Beyond is also the most accessible since it doesn’t make any references to the previous two movies, so not only will Star Trek fans enjoy it, but so will casual viewers who can enjoy these movies without worrying about keeping up with continuity. Live long and prosper, my fellow geeks. Live long and prosper.