Welcome to Target Practice where bad popular songs of the past and present get shot. Reggae is one of those genres of music that was never fully represented well in the charts. What started off as music that addressed the social-political issues of Jamaica eventually spread across the world, spawned multiple subgenres, and became a victim to cultural appropriation. Most of the successful charting songs that fall under the category of reggae are either complete sellouts or are watered-down, whitewashed versions of reggae made for mass consumption. Either way, it all feels fake for the most part and are missing a sense of authenticity that made reggae good, from UB40 to today’s Target Practice victim MAGIC!, who scored this number one hit in 2014. From the hemorrhoided anus of Canada, this is Rude. 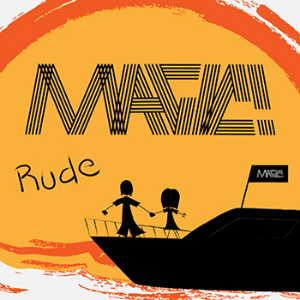 Saturday morning jumped out of bed
And put on my best suit
Got in my car and raced like a jet
All the way to you
Knocked on your door with heart in my hand
To ask you a question
‘Cause I know that you’re an old-fashioned man, yeah

So you put on a suit and go to some guy’s house to ask him a question. Sounds a little… you know… questionable.

Can I have your daughter for the rest of my life?
Say yes, say yes ’cause I need to know

You say I’ll never get your blessing ’til the day I die
Tough luck, my friend, but the answer is ‘No’

Why is HE being rude? You asked for his blessing and he said no. Yeah, you could argue that his response could be condescending, but you’re the worse one here, buddy, begging him to say yes after asking for his blessing and then when he says no, you get all buttburt like a baby pooping their diapers. Can you imagine him using that response in other situations?

guy: Hey, Dad. Can I borrow your car?

guy: Hey, honey. How about we have some fun tonight?

boss: Haha. In your dreams.

I hate to do this, you leave no choice
Can’t live without her
Love me or hate me we will be boys
Standing at that altar
Or we will run away
To another galaxy, you know
You know she’s in love with me
She will go anywhere I go

You know? The more you open your noise hole, the more I sympathize with the father. If you had a daughter, would you want her to be married to this asshole?

Can I have your daughter for the rest of my life?
Say yes, say yes ’cause I need to know
You say I’ll never get your blessing ’til the day I die
Tough luck, my friend, ’cause the answer’s still ‘No”

Can I have your daughter for the rest of my life?
Say yes, say yes ’cause I need to know
You say, I’ll never get your blessing ’til the day I die
Tough luck, my friend, but ‘No’ still means ‘No’!

He keeps asking for his blessing several times. You’d think he’d get the message by now that the father doesn’t want him marrying his daughter. I guarantee you that the father is so sick of this guy that if they were to run into each other and the guy tries to ask him a question, he’d go berserk and be like…

This song is an undisciplined tamper tantrum. Why did I ever liked this crap? The instrumentation is so limp and derivative of nearly every pseudo-reggae song that you’ve heard a million times before. The guitar solo in the bridge is just pathetic. What’s even more pathetic is the singing and lyrics. The lead singer is a whiny entitled child who cries when he doesn’t get what he wants. Asking for the father’s blessing to marry his daughter is pointless in the 21st century. He accuses him of being rude when he’s the one going like “I DON’T CARE WHAT YOU THINK BECAUSE I’M GONNA BANG YOUR DAUGHTER ANYWAYS!!” The worst part? We don’t get anything from the daughter herself and we know nothing about her. Either she’s fed up with her boyfriend’s shit or she does in fact love him and would like to get married. We won’t know because the song never gives us any full details. My goodness, this is First World problems in song form. Next Target Practice, we’ve looked at songs from the 2010s, 2000s, 90s, 80s, and even a song from the 60s, so obviously, the next logical step is the 70s.

Now That We Found Love-Third World

The Harder They Come-Jimmy Cliff