Welcome to Target Practice where bad popular songs of the past and present get shot. I’ve already talk about Ja Rule twice on this site, especially on my Worst Songs lists. He was one of many rappers in the late 90s and early 2000s who tried to emulate Tupac Shakur and his mannerisms without any of the substance that made Pac great. And still, he managed to knock in a bunch of hits at the time, most of them being gangsta rap “love” songs (A.K.A. thugs need love, too). You know. Gangsta rap sex songs disguised as love songs that sometimes feature female R&B singers and are tailor-made for radio spins? Those songs. Today’s Target Practice victim is one of those songs. Featuring Ashanti, this is Always On Time. 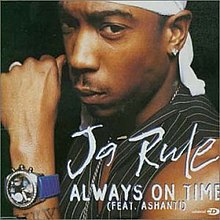 Gave you your what? Your time? Your love and affection? Your… kitty cat? What is it that you gave him? I’m not even looking at the edited version, this is on every copy of the song. What is the entire point of this incomplete sentence anyways?

Oh, so that’s what you mean. You gave him your ALL. Way to play things vaguely with a phrase that could mean anything. Yeah, this hook is very basic and nonspecific so that the listener could put themselves into Ashanti’s shoes and think about the guy they love. Radio marketing 101, ladies and gentlemen. Being that it is a gangster rap “love” song, something tells me that the verses are gonna be different from the hook because most listeners pay less attention to them.

C’mon and get a piece of this late-night lover
You know, the one that swing dick like no other (shit)

Called it. And it’s in the first two lines.

I know, I got a lot of things I need to explain
But baby you know the name and love is about pain

Uhh, no. Love isn’t about pain. There’s a fine line between liking it rough and straight-up abuse.

So, stop the complaints and drop the order restraints
Our sex life’s a game so bat me down in the paint
‘Cause I can’t wait no more
‘Cause it’s about a quarter-past three and shorty’s eyein me

I got the Bentley valeted
And I’m just outside of Jersey, past the Palisades
And I love to see that ass in boots and shades
Hold down on the bed while I’m yankin your braids
Thug style, you never thought I’d make you smile
While I’m smackin your ass and fuckin you all wild

Don’t believe me when I say that these are just sex songs disguised as love songs? Look no further than descriptions of rough sex.

But we share somethin so rare, but who cares, you care

Girl, get a grip, c’mon, pull it together
It’s only a sunshower, we been through worse weather
Like the stormy nights you wrote a “Dear Ja” letter
And took my Benz and keyed and cut the leather

Honestly, I don’t see why any female would want to be in what’s obviously an abusive relationship. What, because of the sex? You do know there’s other guys out there who aren’t complete dickholes who treat you like a piece of meat. As for her vandalizing his car? It’s fucked up, but it’s a reasonable response to his shitty behavior.

Bitch, you know better, we live M-O-B
Money Over Bitches, Murder, I-N-C
I got two or three hoes for every V
And I keep ’em drugged up off that ecstasy

Wait a second. Look at these lines and then look back at the previous lines. As a matter of fact, look at the hook.

This isn’t two people who love and respect each other, this is a conversation between a pimp and his prostitute. It all makes sense why the implications are horrific. Ashanti is portraying a prostitute who promised her pimp (portrayed by Ja Rule) that she would bring him his money, but she’s also tired of the constant abuse that she has to endure, so she tries to get away from him, but then Stockholm Syndrome struck and some part of her doesn’t want to leave. The implications in this song are more horrific when you think about them.

I’m a playground legend like Kirk with Pee-wee
Name a nigga in the league got more game than me
I play hard, there’s so many women I fathered
Meet ’em with scars and send ’em home hot and bothered
Truth or dare, this life ain’t apparantly fair
And a love with no glare is a crystal stare

Fathered? That’s an image that I… don’t want to picture…

Oh I’m, feelin like ya livin a, double life
‘Cause you don’t be comin home, sometimes

This coming from the so-called pimp. Motherfucker, have you looked in the mirror lately?

Baby, but you’re always, on time, checkin for one time
You and I, got a special bond together
We go back like bombers boo, in the coldest weather
And when I play you play the same way you freak me baby I fuck you crazy
Then I’m gone
Baby don’t really want me to get up and leave off that easy
She’ll be wakin up wet for sheezy

Yes. You both have such a special bond that can’t be recreated. I mean, she just wants love from you and you just want sex from her just to make yourself feel like you’re on top of the world.

Remind these bitches to mind they business
Believe me, this pimp game is very religious
And I’m built like the Don Bishop
Gon’ keep this money-green Benz and my hoes as my witness
The life we share is a thug affair

And here we go with the pimp shit again. Because as we all know, a healthy relationship between a pimp and his prostitute is always possible. Where’s the bleach at?

This song is an untimely manipulative muck. Look, there’s an art to writing love songs. There’s many different ways to write a good love song and there’s many ways to write a good hip-hop love song. You can go into a more poetic, thought-provoking route like Kendrick Lamar’s Complexion (A Zulu Love), a jab against colorism and a reminder that love isn’t about the tone of your skin, but what’s inside.

So I’mma say somethin’ that’s vital and critical for survival
Of mankind, if he lyin’, color should never rival
Beauty is what you make it, I used to be so mistaken
By different shades of faces
Then wit told me, “You’re womanless, woman love the creation”
It all came from God then you was my confirmation
I came to where you reside

Or you can go for something more honest and real like Method Man’s All I Need, the ultimate love song of the 90s where Method Man proclaims his love for a certain woman and is willing to settle down with her.

Back when I was nothing, you made a brother feel like he was something
That’s why I’m with you to this day boo no fronting
Even when the skies were gray
You would rub me on my back and say, “Baby, it’ll be okay”

Two different songs with different ways of expressing love and they’re both effective. Always On Time, on the other hand (along with many Ja Rule songs), sells itself as a love song where a girl is falling for the bad boy because he has a good side to him when in reality, it’s just a horrific, pandering track that fools women into thinking he has a softer side when he’s just manipulating their emotions and fooling them into thinking he’ll treat them like they’re queens while he’ll just go have sex with other women and break everyone’s hearts in order to maintain his thug image. The piss-poor writing of this song brings it down a lot in spite of a decent beat and Ashanti’s hook, which only became fuel to the fire in the pimp/prostitute implications. It’s the perfect example of how NOT to write a love song; it’s shallow and doesn’t even know it’s shallow. Sadly, this won’t be the last time we’ll get theses types of awful songs stinking up the airwaves. Next Target Practice, we’ll be looking at a song from Limp Bizkit.