Welcome to Musical Appreciation. With Halloween coming around the corner, I was having a hard time thinking of a horror-themed song to talk about for this post. I could talk about Thriller (the song), but that would be WAY too obvious. And I already did a post on Eminem five months ago, so that’s not an option, either. Then, I came across legendary Houston hip-hop group the Geto Boys. The trio of Scarface, Willie D, and Bushwick Bill were the pioneers of hip-hop that pushed the extremes of gangster rap in terms of violence and murder to the point of horror. It was said that the Geto Boys laid the foundation for the creation of the rap sub-genre horrorcore. Today’s Musical Appreciation is one of the Geto Boys’ most well-known song and their biggest hit to date. This is Mind Playing Tricks On Me. 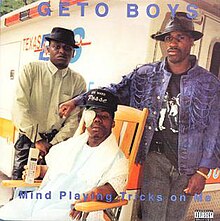 With most gangster rap songs, the violence and the hyper-chauvinism are embraced and these dudes feel like an unstoppable force. Mind Playing Tricks On Me, on the other hand, goes into a vastly different direction and it shows the negative effects of this particular lifestyle while delving into a topic that should be discussed more in the black community, mental health. Scarface’s verses are written in the perspective of someone dealing with PTSD. For people like Scarface, living in the inner city is like living in a war zone, dealing with gangs, drugs, shootings, etc. Seeing this type of activity has had a negative effect on him mentally. He can barely sleep at night because he keeps having nightmares about someone taking him out. His fear and paranoia makes him think he’s being watched. Scarface’s second verse goes into his own depression. Because of his self-destructive lifestyle and his paranoia, finding a source of happiness is difficult and he often have thoughts of ending his own life just to stop the mental pain.

Willie D portrays a big-time drug dealer who’s secretly dealing with paranoia. Because of his status, he feels like there’s a target painted on his head and is watching his back every second. This is something that a lot of celebrities can relate to. When you achieve a certain higher status and acquire wealth, a lot of people will notice, including those with cruel and malicious intent. Those individuals in particular are always the ones who will plan to extort or rob you of whatever you have or worse. There have been several stories of celebrities being stalked, robbed, or even killed because of these people. In the case of Willie D, he’s afraid of his own lifestyle catching up to him in the form of somebody taking him out, which has him looking around every second, ready to fight for his life. One example of his paranoia was when he thought he was being followed.

Reach under my seat, grabbed my popper for the suckers
Ain’t no use to be lying, I was scareder than a motherfucker
But they’re laughing at pow pies and buried that quick
If it’s going down let’s get this shit over with
Here they come, just like I figured
I got my hand on the motherfucking trigger
What I saw’ll make your ass start giggling
Three blind, crippled and crazy senior citizens

Question: how are those senior citizens able to drive when they’re blind? Anyways, there’s also the fourth and final verse from Bushwick Bill, who tells a story about one Halloween night where he and the rest of the Geto Boys had a run-in with an individual who was looking for trouble. So they teamed up and fought the individual, ending with Bushwick Bill punching the guy to a bloody pulp. But there’s a twist:

The more I swung the more blood flew
Then he disappeared and my boys disappeared, too
Then I felt just like a fiend
It wasn’t even close to Halloween
It was dark as fuck on the streets
My hands were all bloody from punching on the concrete

None of the things Bushwick Bill described really happened: it was all in his head while he’s acting them out. Now there’s two ways that this entire verse could be interpreted: 1) these are the thoughts and actions of someone with schizophrenia, and 2) this is someone experiencing the effects of hallucinogenic drugs like PCP. Either way, this is somebody seeing things that aren’t really there.

This is what makes Mind Playing Tricks On Me one of the most unique, quintessential songs of the 90s; it goes into aspects of gangster rap that usually isn’t explored as much, the psychological effects of living in the environments that the Geto Boys lived in and the kind of life that they’ve experience. The true horror of the song is that feeling of hopelessness while you’re in a metaphorical hamster wheel going nowhere, seeing the same traumatic shit over and over again and wondering when it will end.

So that was Musical Appreciation. Next time, we’ll talk about Panama. And next week is the Worst Songs of 2005 list.

This Girl-Kungs vs Cooking On 3 Burners