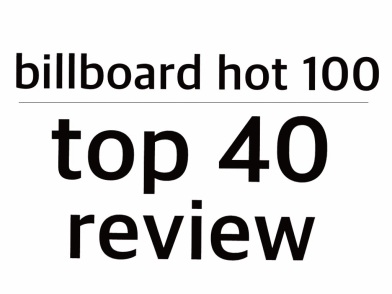 Welcome back to another Billboard Hot 100 Top 40 Review where we look at the 40 most popular songs in the United States. *sighs* Yesterday, evil has won. Donald Trump will be the 45th President of the United States. I’m still pinching myself trying to wake up from this nightmare, but this is our reality now. This human Cheeto-Puff is going to run our country and all of the progress that Obama has made through his not-so perfect 8 years will be tossed out of the window. Affordable health-care? Gone. Women’s reproductive rights? They’re in critical danger. Efforts to combat climate change? Oh, please. He thinks climate change is a hoax created by the Chinese. Instead, he’d rather build a wall in the U.S.-Mexico border to keep out undocumented immigrants, even though the wall would take a long time to build even with the best workers moving in a fast pace and it would cost trillions to do, which is money that’ll come from us, the taxpayers, and would further increase the deficit. We don’t need the fucking wall. Trump’s policies are not going to help anyone but straight, Christian white men. If that statement offends you, I’m sorry, but it’s true. This is a guy who wants to kick out 11 million undocumented immigrants because they’re “criminals and rapists.” This is a guy who want to ban ALL Muslims from coming into the United States, even if they were born here. This is a guy who thinks stop-and-frisk is a good idea to combat crime in the inner cities while not realizing that this would increase further profiling of African-Americans and Latinos by police. This is a guy who has said nasty and horrific things about women and has admitted to sexual assault on tape. His choice for Vice President, Mike Pence, is a fucking homophobe who believes in conversion therapy, which has a success rate of 0%. Yet even with all of this baggage, his supporters don’t care and they came out in force to get him elected. Thanks to Donald Trump, all of the racist, sexist, homophobic, transphobic, xenophobic, bigoted assholes of the far-right now have carte blanche to freely discriminate against those different from them and expect no consequences in return. You know who I blame for this? The people who didn’t vote because they thought it wouldn’t matter, the Democratic Party for being too overconfident in Hillary Clinton that they screwed over Bernie Sanders while doing a poor job at addressing her various scandals, and the Republican Party for having no goddamn spine and letting Trump get as far as he did. And because of this, we, the United States, are paying the price. We might have topped Brexit for pure stupidity in an international scale. We have officially entered Idiocracy. I apologize for the long-ass political rant, but the last 24+ hours have been stressful and made me pessimistic and depressed. I’m not in the best mood right now, but I believe that Americans can get through this disaster. We’ve survived worse. It’s gonna be a LONG four years. Now back to the thing you all clicked on this post for.

#40. May We All-Florida Georgia Line ft Tim McGraw: So a while ago, the Country Music Awards happened. Don’t ask me about because I didn’t watch it. Anyways, because of this, a whole bunch of country songs got a big boost in sales and are charting higher on the charts, including Florida Georgia Line’s latest single with Tim McGraw, which isn’t good at all. The instrumentation is thin and is the most generic pop country you could’ve ever hear. Tim McGraw sounds okay, but the writing isn’t anything special as it’s another small town anthem that you’ve heard a bunch of times in country and it’s so vague that you don’t feel any connection to the song. Plus, there’s this lyric.

Okay, seriously. What country town has people listening to Tupac? Oh, well. I give this song a D.

#39. In The Name Of Love-Martin Garrix & Bebe Rexha: In 2016, EDM songs fell into two categories: tropical house and trap. In The Name Of Love is a mix of both and I think it’s a good song. Outside of that screeching sound in the drop (which can be bothersome), the production is amazing for the most part. Plus, Bebe Rexha is a damn potent singer who can match the intensity of the production. I look forward to seeing this stick around. I give it a B. It was almost an A until the screeching.

#33. Sucker For Pain-a shitload of people: B

#28. Sneakin’-Drake ft 21 Savage: Oh, look. More Drake. Because we didn’t have enough of him on the charts. This time around, he’s planning to release some compilation playlist or something in December and so far, the songs he released have been in poor quality. First off is Sneakin’, a collaboration with 21 Savage, and it sucks ten elephant dicks. The beat is every desaturated modern rap beat out there. Both Drake and 21 Savage sound bored as they’re delivering more luxury rap shit. There’s nothing interesting or compelling about this song, it’s a pile of nothing and it gets an F from me.

#25. Blue Ain’t Your Color-Keith Urban: This year, Keith Urban pulled a Taylor Swift and released a pop album called Ripcord. And it sucked. Really bad. You want an example? Blue Ain’t Your Color, which is one of the singles. Outside of the guitar, the production is garbage, it’s a good representation of the awful production of Ripcord. Meanwhile, Keith Urban is hitting on a chick at a bar and insists he’s not trying to take her home. I’m getting Take Your Time vibes out of this song, which is not a good thing. Eww. I give this an F.

#24. Scars To Your Beautiful-Alessia Cara: You know? I’m starting to think that Alessia Cara was a fluke because she has yet to make a song as good as Here. It looks like Scars To Your Beautiful isn’t going to change that anytime soon. I’m not saying this song is bad (because it’s not), but it could’ve been so much better. This is your typical empowerment song with some of the most generic production to date. Seriously, that warbling sound is ruining the moment. And it’s sad because this is a well-written song that tackles self-image and how people felt about themselves. Man, I wanted to like this song, but this production isn’t helping matters. I give it a C.

#23. This Is What You Came For-Calvin Harris ft Rihanna: F

#21. Caroline-Amine: And now for generic rap song #74532, Caroline by Amine. What we have here is a song with weak barebones production that leaves no impact and a rapper (who fails at both rapping and singing) trying to pick up chicks with some of the lamest lines ever, including a 98° reference, and some really bad punchlines that even Lil Wayne would reject. Again, this is just nothing. Why is this song this high up again? I give it an F.

#11. Don’t Wanna Know-The Adam Levine Show ft a rapper too good for this song: Hello, Maroon 5. I didn’t miss you at all. By now, this group has established themselves as one of the worst acts of the 2010s, getting worse with each new song released. Last year, they released the audio version of an STD in This Summer’s Gonna Hurt Like A MF. This year, they’re pining to out-stink themselves with Don’t Wanna Know. If this song isn’t an indicator of their low quality of music, I don’t know what is. We have Adam Levine screeching like a cat giving birth about his ex over the most cheap, synthetic examples of tropical production this year has given is. Plus, they had the gall to bring in Kendrick Lamar to deliver one of his worst verses to date. This is Kendrick third appearance in a mediocre pop song that became a hit. People who only listen to music that’s on the charts, this is not a good representation of Kendrick as an artist. I’m going to say this again and again: listen to good kid, m.A.A.d city and To Pimp A Butterfly. He’s a great artist, don’t let The Adam Levine Show here tarnish your view of him. This piece of shit gets an F.

#10. Fake Love-Drake: And now for the other Drake song on the charts, Fake Love. Really? Is this the best that he can do because this is pathetic. We have a beat that’s pretty similar to the one for Hotline Bling, only lazier. And then there’s Drake’s vocals, which are painfully awful. The vocals are off-key and have no direction. No matter what excuse someone will make, it’s just bad. And then there’s the lyrical content, where Drake is whining about fake friends showing fake love. Didn’t this dude make an entire album complaining about that subject matter? I guess redundancy is your friend when it makes you money. Urgh. I give this an F.

#8. Juju On That Beat-two bum rappers: Great news: Vine is dead. Bad news: viral songs are still kicking. Didn’t I once ask that we leave these stupid songs behind last year? Anyways, the latest musical cold sore is called Juju On That Beat by two rappers who I refuse to name because I’m bound to forget about their names after this post. If I have to give this song SOME praise, it’s really short at barely 2 minutes. But even then, it’s still 2 minutes of your time wasted. This song feels incomplete and it’s all thanks to the beat which is a cheap rehash of nearly every ringtone rap song of the mid-2000s. And then we get to the rappers who have no presence, charisma, or rapping talent. There is nothing to this song that bares repeated listens and that’s why I’m giving it an F.

#7. 24K Magic-Bruno Mars: After nearly three years of releasing no new music and appearing on the awesomeness that was Uptown Funk, Bruno Mars is back with a new single, 24K Magic. I’m not gonna lie to you folks, I really enjoy the hell out of this song. Maybe it’s because I’m a sucker for well-made retro track is why I like this song. It’s easy to make a comparison to Uptown Funk because it is Bruno embracing ridiculously over-the-top braggadocio, but the production makes the song stand on its own. Where Uptown Funk was inspired by Minneapolis sound, 24K Magic leans more towards electro-funk that would fit perfectly for a Zapp album with spacy synths, groovy bass and the use of talk-box throughout the entire song. Definitely looking forward to more Bruno Mars when he releases his new album. I give this song an A.

#5. Broccoli-D.R.A.M. ft Lil Boat: C (yes, the song has grown on me a bit, but it’s not the masterpiece everyone praised it to be; it’s still basic, Lil Yachty sucks, and there’s much better songs on Big Baby D.R.A.M., which is a really good album, BTW)

In The Name Of Love

Juju On That Beat, Fake Love