Welcome to Musical Appreciation. The 80s was a breeding ground for glam rock. At the time, there was no way you could go anywhere without hearing this type of music whether it be radio or MTV. I’ll talk more about glam rock when I start doing lists on the 80s. One of the best bands out of the whole subgenre is Van Halen, who were the precursor to glam rock, embracing the rock ‘n roll lifestyle that would later be embraced by bands like Poison, Ratt, Motley Crue, etc. Today, we’ll be looking at one of their more recognizable hits. This is Panama. 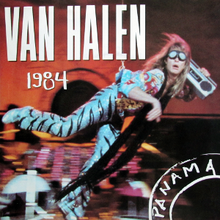 First thing first, the instrumentation rocks. Eddie Van Valen is an all-time great guitarist and he slays this song with his guitar work and a shredding solo in the bridge. Michael Anthony’s bass anchors the entire thing with its tight groove. Alex Van Halen is an amazing drummer, his work in the song was simple, but hard-hitting. And we can’t forget about David Lee Roth, who was pretty much the rock ‘n roll frontman that most aspire to be in the 80s, who has so much presence and charisma that’s matched by few.

Strangely, in spite of the title, Panama has nothing to do with, you know, the country of Panama. It’s not a political statement, it’s a party song, plain and simple. Even stranger is that it’s about a car that David Lee Roth saw in Las Vegas that was called Panama Express. Also, he had a car that was also named Panama. Huh. Guess inspiration can come from anywhere. Still, this song is awesome. If you’re throwing a party and you wanted to add some 80s music into the DJ playlist, this song is one of your options.

So that was Musical Appreciation. Next time, we’ll be looking at a surprise.

Killing In The Name-Rage Against The Machine

The Blacker The Berry-Kendrick Lamar