Not that long ago, in a galaxy not so far away, I have four favorite franchises of all time: Marvel, DC, Disney (and that includes Pixar), and Star Wars. Let’s talk Star Wars and how much I love this franchise. Like many geeks, I grew up on Star Wars., which had one of the best movie trilogies ever in the original films. Empire Strikes Backs still remains not just the best Star Wars movie, but one of the best sci-fi films of all times. I’m not gonna bother talking about the prequels because everyone else has talked about those films and tore them apart. Now, it’s been more than a year since The Force Awakens and we’re a year away from Episode VIII. In between these films is the start of the Anthology series that takes place before the events of A New Hope and is also the film we’ll be looking at today. This is Rogue One: A Star Wars Story.

A scientist named Galen Erso helped the Empire create the ultimate weapon of terror that can destroy entire planets, the Death Star. Fifteen years later, his daughter, Jyn Erso, joins forces with members of the Rebel Alliance in order to capture the Death Star plans, which exposes a design flaw that can be used to destroy the weapon. For those confused about this film, this takes place before A New Hope. In terms of the plot, this should be simple, but it does have a lot of padding, especially in the first half. It takes too much time establishing everything that’s going to happen and I’m not gonna lie, I was ready to write this film off. But then halfway through, things start picking up and the film gets really good. It’s the exact opposite of Suicide Squad where in that film, the first half was good and it got worse as it went one. Rogue One started off ehh at first, but it gets better as you further watch it. 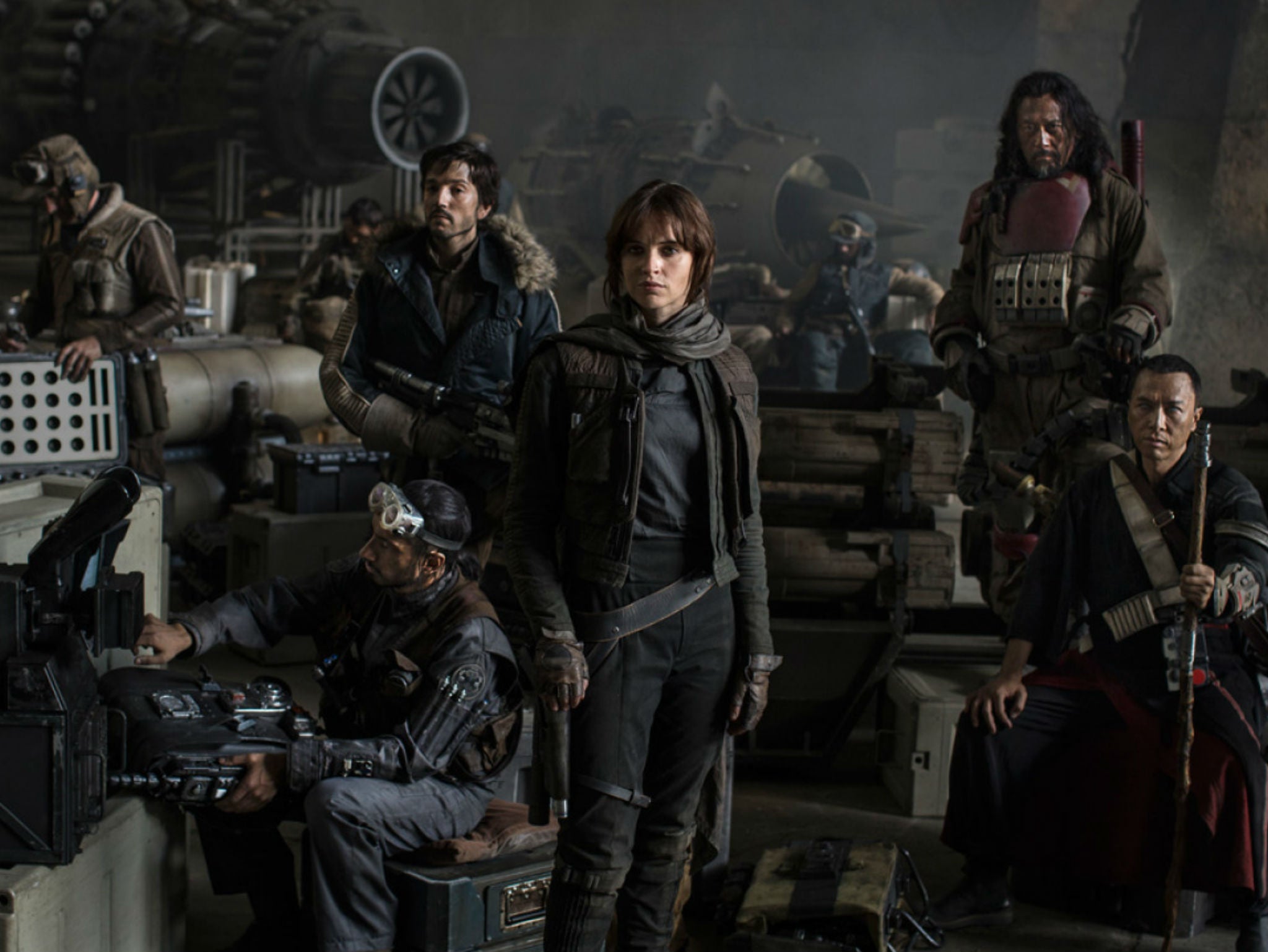 There are a lot of new characters in this film, plus old ones. Let’s look at the new characters, starting with Felicity Jones as Jyn Erso, the daughter of the man who helped create the Death Star, who’s freed from the Empire by the Rebels to join the fight. She’s pretty much plays the role of a more angsty Han Solo. Donnie Yen and Jiang Wen are awesome as a blind warrior tied to the Force and a gruff mercenary. The main villain is Orson Krennic and he was just enjoyable to watch. My favorite character is K-2SO, an Imperial droid reprogrammed by the Rebels to fight for him. Imagine C-3P0 with balls, that’s this character. The rest of the characters are either passable or bland. If you’re thinking about getting attached to these characters, don’t. Why? Because they all die by the end of the movie.

Right now, we have to talk about the man of the hour, Darth Vader, voiced once again by James Earl Jones. This character is only on screen for like 10 minutes, but every second with this character is time well-spent. He has two scenes; the first scene is when he meets up with Krennic and makes him his bitch. We’ll talk about his second scene in the next segment.

One thing you’re guaranteed to get out of a Star Wars film is some great action and the action in this film does not disappoint. The war in Star Wars is emphasized as we get a lot of shootouts. The visuals are literally out of this world as it perfectly recaptures the world George Lucas created decades ago. The best action piece is, of course, in the climax where the Rebels head out to a data bank in Scarif to retrieve the Death Star plans. It’s just nonstop action with the Rebels going up against Imperial forces, who have stormtroopers and AT-ATs, plus, dogfights in space between X-wings and TIE-fighters. There’s a scene where one of the Rebel ships pushes a Star Destroyer against another Star Destroyer. How much more awesome can it get? Oh, but it gets better. After Rebels on the ground sent the Death Star plans over to their command ship at the cost of their lives, Darth Vader shows up on the command ship to get the plans back. The Rebels try to stop, but then Vader whips out his lightsaber and tears through these motherfuckers like they were made out of paper, slicing, stabbing, and crushing them with the Force. This shit was filmed like a scene from a horror movie as the Rebels are panicking, desperately trying to get the plans away from Vader. Vader was no longer that whiny teenager who looked like Hayden Christensen. He was a…

I give Rogue One a very strong 7/10. This film doesn’t have the strongest narrative and it’s not as great as the original trilogy or The Force Awakens, but it’s pretty good as a standalone Star Wars story. It focuses more on the war aspect of the series, making it darker and more brutal than the other films. The first half of the film is a bit slow, but things get better and start picking up by the second half. To take a small plot point like retrieving the Death Star plans and making it into such an entertaining film is an admirable task that the filmmakers surprisingly pulled off. If you’re a Star Wars fan like me, then this is worth checking out.