Welcome to Target Practice where bad popular songs of the past and present get shot. Lip syncing. This has been a controversial topic among music fans. Some question the artistic merits of those who lip sync regularly while other point out its importance for artists whose live performances include dancing or some elaborate stagepieces that requires a lot of movement. The lip syncing debate has been ongoing for several decades now with many questions brought up like this: can lip syncing kill a career? Well, the answer to that particular question is complicated. There have been high-profile artists who are known for lip syncing and have managed stable careers. But there have been instances where successful careers have been halted because of controversy surrounding lip syncing. Two examples of that are Ashlee Simpson’s botched SNL performance that was painful to watch. Another case of career-ending lip syncing involves 80s pop group Milli Vanilli. Oh, you could write an entire article on Milli Vanilli. Basically, the faces of Milli Vanilli never actually sang any of their records, someone else did, and because of this, they were stripped of their awards and dropped from their label. The funny thing about the whole controversy was that people should’ve saw it coming. You got these two dudes from France and Germany whose English was shaky at best, performing music with voices in perfect English that doesn’t even sound like them, even with any vocal effects. Plus, there was that MTV live performance where they were performing Girl You Know It’s True when the track kept skipping and they didn’t know the lyrics. The red flags should’ve been obvious. Even without the whole lip syncing thing, the music isn’t that good, it’s mostly generic love schlock. Prime example is today’s Target Practice. This is Baby Don’t Forget My Number. 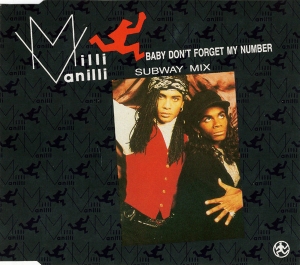 Well, that’s not cheesy at all. I don’t see this being used in corny boy band songs.

And now we’re at one of the most cliched lines in love songs. “Call me when you’re in need.” It’s like you’re just going through the checklist of cliches while listening along.

Wow. Nearly every songwriting mistake that an individual can make is present in this chorus. Needless repetition, stretching words, and poor rhyming. This is like someone turning in the first draft of a college essay on the day the essay is due, the flaws are gonna stick out like a sore thumb.

I would go into more lyrics, but there aren’t anymore new lyrics to be found in this song by this point, which means this is gonna be a short post.

This song is bleh. The production is the worst of 80s pop music that’s dated as hell, the rapping is amateurish and phony, and the lyrics are nonstop cliches. This is one of those songs that you can play a Bingo game on. Every love song cliche is present in this song with lyrics so depthless that any attempts at analysis is pretty much pointless. Talking about the controversy surrounding Milli Vanilli is more interesting than talking about their music because there’s nothing to them. They were a literal commercial product that was successful at one time, making manufactured, disposable fluff that they didn’t even write or sing. I’m genuinely amazed by the amount of crap that the music-buying public let slide through Billboard history. Making Worst Songs lists off of the 80s will be interesting. Next Target Practice, we start Women’s Month with a flop from Iggy Azalea.