Welcome to Musical Appreciation. Man. What an exceptional talent Lauryn Hill was. Singer, rapper, instrumentalist, producer, one-third of The Fugees. In the 90s, she was a queen that thrived among other hip-hop and R&B queens. Lauryn was the voice for black women who were woke when it comes to love and themselves and her work with The Fugees was phenomenal. Don’t even get me started on The Miseducation Of Lauryn Hill, which is one of the most essential records from the 90s that everyone needs to hear (and judging by its sales and acclaim, most people already have). Today, we’re going to be looking at her big hit, which I named the best song of 1999 and and the 4th best song of the 90s overall. This is Doo Wop (That Thing). 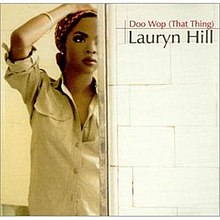 This song is pretty much a PSA to black women and men, warning them about “that thing.” What is “that thing?” Well, it has different meanings depending on the genders, but they have one thing in common: it calls out those living their lives on the wrong path. In a way, this song is a better-framed version of Hopsin’s Ill Mind 5, pointing out the faults of Lauryn’s own generation, but unlike Ill Mind 5, it doesn’t do so in an antagonizing way. It lets them know that the way they carry themselves can attract certain people. Negative things draws in negative people. In the case of women who use their bodies and sexuality for attention, they’re gonna draw in men who are only interested in their bodies. And in the case of men, if they’re showing off jewelry and spending money on rims and expensive alcohol, they’ll attract women, who’ll only use them to buy materialistic things. Lauryn admits that she’s been down the same road, which paints her not as a perfect holier-than-thou figure preaching to the choir, but as a human being with flaws like everyone else.

Onto the instrumentation and production. This song manages to bridge the sounds of two generations, capturing the soul of old-school R&B in those piano notes and brass horns and mixing it with hard-hitting beats of hip-hop. The sound is retro, but it’s modern enough not to be a throwback. This attracts both the older and younger generation to the song. This is reflected in the music video where we see a block party presented in two sides, the 60s on the left and the 90s on the right. Is it really surprise that the song was as big as it was? We don’t really get this type of music from female rappers in the mainstream today. You want something close to this, you have to go underground. Even then, Doo Wop (That Thing) is a timeless classic that can’t be matched. A shame that Lauryn isn’t doing more music.

So that was Musical Appreciation. Next time, we’ll talk about Rhythm Nation.