Welcome to Musical Appreciation. When the phrase “Queen of Pop” is uttered, usually, people would think of icons like Madonna or Lady Gaga. They’re great and all, but they’re not the only ones worthy of the title. For me (and other people), Janet Jackson doesn’t get enough credit for her contributions to 80s and 90s pop music and how influential she actually was. Maybe it’s because of her family and more famous older brother. Maybe it’s because of the overreaction to the Super Bowl nipplegate from 13 years ago. Who knows? Whatever the case, it shouldn’t undermine the greatness of her music. Today’s Musical Appreciation is one of Janet’s crowning achievements in music and I’ve talked about in my 100 Best Songs of the 90s list. This is Rhythm Nation. 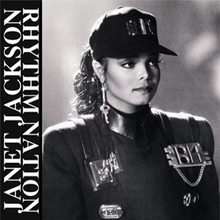 The song was written in response to the numerous tragedies that were shown in the media at the time, prompting Janet to make more socially-conscious dance music, which is something we don’t see that often in the mainstream. So over upbeat funky instrumentation with industrial percussion, Rhythm Nation is a call for unity of all people, regardless of ethnicity, race, gender, sexual orientation, religion, etc., in order to make a better world for the future. Because we only have one Earth and it’d be a shame if our planet is uninhabitable because of our greed and selfishness. Every type of bigotry is shot down as they should because only an ass-backwards Neanderthal would think this is okay. It’s a message that’s timeless and it’s relevant in today’s society. We need love, not hate. At the end of the day, we’re all human.

This is exemplified by the now-iconic black-and-white music video where Janet and a group of dancers from different backgrounds all dance in sync inside a warehouse factory. It’s on-par with something Michael would’ve made with its one of a kind dance choreography and it goes alongside the song’s message of unity. This is a video that nearly every pop and R&B star have either paid homage to or tried to recreate with little to no success. This is how you know you’ve made something special.

So that was Musical Appreciation. Next time, we’ll talk about The Fame Monster.