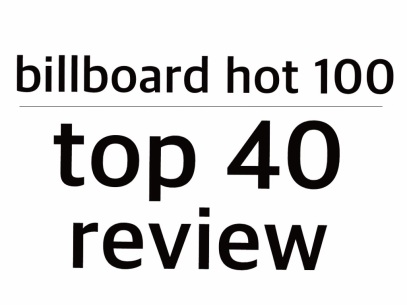 Welcome back to another Top 40 Review where we look at the 40 most popular songs in the country. Let’s get started.

#39. Rolex-Ayo & Teo: Well, with anything that becomes popular, there’s bound to be copycats. Since Rae Sremmurd are still popular *rolls eyes*, the industry is now pushing this copycat duo Ayo & Teo in order to recreate that success. And just like the genuine project, these two stink. Case in point, Rolex. This song could fit in with Rae Shitheads’ entire discography: empty bragging, generic production, shrill vocals laced with Auto-Tune, etc. It’s an empty song that brings nothing new to the table and hope that it’ll be forgotten before the year is over. I give it an F.

#38. The Fighter-Keith Urban & Carrie Underwood: Thanks to the Country Music Awards, a whole bunch of country songs have gained a boost on the charts, including this collaboration between Keith Urban and Carrie Underwood called The Fighter. This song came from Keith’s last album Ripcord, which was a horrendous piece of pop sellout and this song is no exception. This is a pop song, plain and simple, and it’s generic as fuck. The synthetic production that would’ve been at home on a Maroon 5 album, the Auto-Tune, both Keith and Carrie not performing at their best, uninteresting content where Keith sells himself as a man who would fight for his woman. It’s a sellout in a nutshell and it’s getting a D.

#36. Portland-Drake ft Migos & Travis Scott: A few weeks ago, Drake released More Life, another album. It’s basically Views 2.0 doubling down on the fake Jamaican shit, plus, biting flows and beats from the U.K. grime scene (fake British accent included). Aside from three songs that featured little to no Drake, nothing great came out of this album. Yes, I know it’s labeled a playlist, but it’s a fucking album. What’s the difference? Anyways, Portland. It’s another brag rap song that self-congratulates its success with Migos and Travis Scott all on a beat rooted on a recorder. Most of the things said on this record, we’ve heard before from these dudes. The most hilarious thing about this song is that it criticizes rappers who are wave riders. I find it hilarious since for the past six years, Drake has been known to ride the waves of every trend, new rapper, or anyone or anything with a buzz. Pot, meet kettle. I swear Drake has the most gullible fanbase in hip-hop to let this shit slide. Overall, this song gets an F.

The headaches just never ends. So some facet of the Internet has given this XXXTENTACION guy praise. Listening to some of his songs on Soundcloud, I have to wonder if this is a troll thing or if they’re deadass serious. Because his shit is garbage. Plain and simple. And thanks to Billboard incorporating streaming sites like Soundcloud into their data, we can expect more Soundcloud trash like Look At Me to be on the Hot 100. And boy, is this song terrible. The lyrics are a cartoonish exaggeration of rap cliches with lines that are either unfunny or are attempting to shock, but fail. XXXTENTACION himself is an annoying man-child who wouldn’t even make the cut for Odd Future. And then there’s the beat. Not only is this another generic trap beat, but the mixing is horrible. The bass is too distorted to the point where it messes with the vocals. When I was listening to this song, I kept thinking that there was something wrong with my speakers and headphones, but that’s just how the song was mixed. How can anyone sit through this without cringing? I give this an F.

#30. Scars To Your Beautiful-Alessia Cara: C

#24. Location-Khalid: So a bunch of people like this song. As for me? It’s okay. Not great, not horrible, just okay. It’s an inoffensive R&B love song with a downtempo tropical vibe that I’m sure will get plenty of spins on radio. Khalid ain’t bad, but not amazing, either. I’ve heard worse, but to me, it’s just background music and I’ll most likely forget it existed. It gets a C overall.

#23. Passionfruit-Drake: Oh, goody. More Drake. And because the fake Jamaican shit helped him score a number one hit with One Dance, the next logical step for Drake is to recreate that song. To be fair to Passionfruit, it has better production. It’s a dancehall house fusion and if it was just an instrumental, I would’ve loved this song. BUT then we get to Drake, who’s singing in a fake Jamaican accent about being unable to keep a relationship while touring. You know? The thing that this dude has bitched about since his first album? Dude, it’s been nearly a decade. How have you not figured it out? At some point, this topic has lost its endearment and it further paints him as a dumbass who doesn’t learn. I give it a D, mainly because of the beat.

#16. XO Tour Life-Lil Uzi Vert: Because we don’t have enough shitty hip-hop songs on the charts, here’s Lil Uzi Vert. You know? That weird skinny guy with colorful dreads, stupid tattoos, a high-pitched voice that’s sometimes Auto-Tuned, whose content is more of the same mainstream rap tropes that we’ve seen billions of times? Yeah. That guy. Think of Young Thug, but less interesting.  If you wanna know why this dude sucks, listen to XO Life Tour, which is every single modern rap song in a nutshell. Desaturated rap beat? Check. Auto-Tune? Check. Stealing another man’s girlfriend? Check. Can’t flow, stay on-topic, or say anything interesting? Double check. Why do people like this guy again? This gets an F.

Huh? Wha-? What happened? Oh. Future. Well. Future finally has a legitimate hit on his own without assistance. The only interesting thing about the song is the flute sample, which has spawned another Internet challenge. Aside from that, there’s nothing else: standard trap beat, boring flow, more empty bragging and drug rhymes. It’s a waste of time and I give it an F for that.

#7. I Feel It Coming-The Weeknd ft Daft Punk: A

#2. Humble-Kendrick Lamar: In an ocean of mediocre-to-bad hip-hop songs, we finally get a break from King Kunta himself, Kendrick Lamar, whose releasing his newest album DAMN in 3 days and here’s our first taste of the record, Humble. I wouldn’t call it my favorite Kendrick song or the best, but hot damn, is this song banging. Kendrick is once again spitting fire as he reassures his dominance over the rap game and tells other rappers to sit down and be humble. Line after line hits you with the force of a hurricane and they’re complimented by a surprisingly good beat from Mike Will Made-It with those nasty piano notes. April 14 can’t come soon enough. I give Humble a not-so humble A.