Welcome to Target Practice where bad popular songs of the past and present get shot. I’m super duper late to the party on this one, but shit happens. Remy Ma vs Nicki Minaj. This is a feud that’s been happening for ten years now with the two throwing subliminal shots at each other. All because Nicki allegedly dissed Remy on a mixtape track and Remy didn’t like that. 2017 and the subliminals didn’t stop with Nicki taking shots at Remy on both Make Love and Swalla. Remy’s response? Shether, a brutal diss track over the instrumental to Ether and she goes IN on Nicki. With this track, hip-hop fans declared Remy the victor even with Nicki releasing a response in today’s Target Practice, which was released along with two other songs that people have already forgotten about. Featuring Aubrey Graham and Dwayne Carter, this is No Frauds. 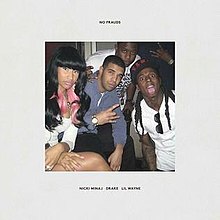 No frauds, huh? This coming from a woman with fake boobs and ass working with a Canadian waverider who bites more flows and sounds than anyone can count and a fake Blood/skateboarder all signed to a label notorious for not paying its artists and producers. Pardon me for not being convinced by your words.

Aye yo, throw your wrist-es up, all my bitches up
These niggas is pussier than what? All them dicks is up
All my real niggas down to ride, throw your GSXRs up
I ain’t in the projects, but all my bricks is up, rrrr

And Nicki starts off with… some really clumsy, forced punchlines. Throw your wrist-es up? Pussier than what? Yeesh. Talk about dropping the ball. And I highly doubt that a mulit-millionaire is still slanging dope in the projects.

You can’t be Pablo if your work ain’t sellin’
What the fuck is this bitch inhalin’?

Bringing up numbers because that’s what matters. Not the quality of your music, but how much it sells. I think the question of “what the fuck is this bitch inhaling” should be applied to you.

I would’ve helped you out that pit you fell in
I am the generous Queen! Ask Ms. Ellen

I am the generous queen, ask Ms. Ellen.

Tried to drop “Another One”, you was itchin’ to scrap
You exposed your ghostwriter, now you wish it was scrapped
Heard your pussy on “Yuck,” I guess you needed a Pap
What type of bum bitch shoot a friend over a rack?
What type of mother leave her one son over a stack?

Aside from the Pap line, she kinda does have a point.

Lil Boogie down basic bitch thinkin’ she back
Back to back, oh you mean, back to wack?
“Back to Back”? Me and Drizzy laughed at that

Woman, I listened to this song before doing this post. Back To Back, this is not.

You do know that LeBron is considered one of the greatest NBA players not because he won a lot of championships, but because of his stats and how he plays the game.

I never signed a 360, bitch you wild dumb
That’s why Jay ain’t clear his verse for your album

And what do these two things have to do with each other? This is called a false equivalence.

Sheneneh, you a fraud committin’ perjury
I got before and after pictures of your surgery
Rah took you to her doc, but you don’t look like Rah
Left the operating table, still look like “nah”

Yeah, yeah, never been no fraud
Why do niggas that are not involved love to get involved?
Why do niggas claim the streets and act just like the law?
Riddles that I cannot seem to solve, man
Cristal, come at me, Weezy F and Nick
All come and spoke about your shit in ’15
Man, I know you niggas saw this one comin’
My net worth sound like (brrrrrr)
But they don’t pay in cash
Niggas see me like, “What up, Killa?”
Man, please stop bringin’ up my past
I’d really love to leave that behind
Sometimes I ask God, “Man, why him?”
Like the team that I would never leave behind
I really gotta ease off the wine
Which is funny because I just saw Nick the other day
And she keeps getting finer over time
I just know

Well… it’s not terrible. It’s ain’t exactly good, either, but I’ve heard worse from this dude. For now, he gets a pass. Now for Wayne.

Uh, I am not a fraud, YM, I’m the God
They don’t make ’em like me no more, man, I’m a dinosaur
Blunts be tight as biker shorts, twisted like some handlebars
Lil’ Tune out a cartoon or Avatar
I just looked in the mirror like, “All right, all right, all right”
I would let that little leaguer right there fuck my wife, word
I don’t need no fraud bitches in and out my life, word
Eatin’ out my pockets, they be in and out of sight, word
I don’t need no drama, I just need some nana
Just told my lil’ mama, “Babe, I think I love you, kinda”
Feelin’ like Tune-y Montana, Weezy, he get honored
Drake a headliner, and Nicki, she get finer, word

Uhh, Wayne? You do know that being called a dinosaur isn’t exactly a good thing. Whenever someone calls you a dinosaur, it’s usually an ageist slur used by dumb young motherfuckers calling anyone over the age of 30 old. Whatever. Outside of that, this is standard Wayne. At least the song is over. Now, I can wrap this up.

This song is fraudulent. As a diss track, it is WEAK. It does not hold up to classic diss tracks like Hit Em Up, Ether, Nail In The Coffin, or No Vaseline. Some of the lines do connect, but nothing wows me. Half of the time, Nicki is bragging about her success and accomplishments like we haven’t heard them for the millionth time. It seems like she was trying to make the next Back To Back, but as a club song, it’s very standard with the by-the-numbers trap beat and Auto-Tune. Drake and Wayne were passable at best. Overall, No Frauds isn’t a good song, but because it’s from the Young Money Trinity, it’ll be a big hit on the charts and…

I’m sure this will come back to bite me in the ass if the music video gives the song a huge boost. But if it doesn’t, damn, son. You done fucked up. Next Target Practice, Lil Uzi Vert. And that’s all you need to know.

Land Of The Free-Joey Bada$$