Welcome to Musical Appreciation. I kinda felt bad crapping on Mariah Carey on my Target Practice of Obsessed (even though it was a bit deserved), so what better way to make up for that than a Musical Appreciation. In the 90s, Mariah reigned supreme in music, scoring hit after hit after hit with songs that hold up pretty well for the most part. Her gigantic voice made her stand out the most out of every female artist of the time, being able to hit notes that few are able to achieve. Today’s Musical Appreciation is a collaboration Mariah did with R&B group Boyz II Men and is one of the biggest songs of the 90s, staying at number one for 16 consecutive weeks on the Hot 100 and topping Billboard’s decade-end chart for the decade. This is One Sweet Day. 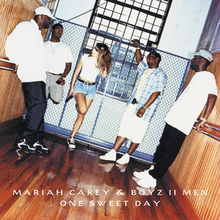 One Sweet Day speaks from the perspective of someone who has lost someone close to them and how much they miss them. But they also hope to one day see them again in Heaven. This is something that we have all been through, when we hear the news that a family member or friend has passed away and an overwhelming sea of emotions hit you like a boxer’s fist. This song was made in tribute to David Cole, one-half of C+C Music Factory and Mariah’s frequent collaborator and friend who died in 1995 due to AIDS. It was also a tribute to Mariah’s sister and pretty much everyone who lost their lives to the AIDS epidemic. But it could also be applied to any situation where someone died.

There’s a very heavy gospel influence in One Sweet Day, which is all thanks to the instrumentation. The organ, the toned-down drums and percussion, hints of synthesizers, and choirs that adds atmosphere to the song. It’s somber, yet uplifting at the same time, calling for celebration of life instead of just mourning death. And of course, Mariah and Boyz II Men kill it with vocally. They sell the emotional weight of the song that you can feel and get behind like you were listening to a preacher’s sermon. It’s the ultimate tribute song to those who aren’t around us anymore and it deserved every accolade it got.

So that was Musical Appreciation. Next time, we’ll talk about Lost Ones and next week, it’s the Worst Songs of 1981.

Everyone Wants To Rule The World-Tears For Fears

Angel Of The Morning-Juice Newton