Welcome to Target Practice where bad popular songs of the past and present get shot. A month ago, I started BACK TO THE 80s, where I went and listened to songs from the 80s Year End charts and make Worst Songs lists off of each year, concluding with the 100 Best Songs of the 80s. And as you can tell, the 80s wasn’t just nonstop classics that we know and love. There’s also some crap in the mix mucking things up and a lot of them are songs that the general public have mostly forgotten about like today’s Target Practice victim. Not only was this a number one hit, but it’s the number 3 song on 1987’s Year End chart. It’s the debut single for R&B singer Gregory Abbott. This is Shake You Down. 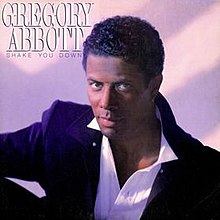 Girl, I’ve been watching you
From so far across the floor now baby
That’s nothing new
I’ve watched you so many times before now baby

That’s what women like, some dude staring at them from a distance. Nothing wrong with that at all.

They’re probably saying, “why is this creepy-looking guy stalking me?”

Telepathy? Are you from the X-Men?

You know? I get that this is a sex song, but this phrasing is just all wrong. Shake you down. I don’t know about you, but whenever I hear that, I always think of the violent implications.

Oh, I’ve been missing you
And the way you make me feel inside
What can I do?
I can tell you’ve got your pride now baby

Come to me, well, well
Let me ease your mind, oh baby
I got the remedy, yes I do
Now give me just a little time

Girl, I’ve been missing you
And you know it’s funny
Every time I get to feeling this way
I wish I had you near me, I
I wanna reach out and touch you

I can’t stop thinkin’ of the things we do
The way you call me baby when I’m holding you
I shake and I shiver when I know you’re near
Then you whisper in my ear, oh baby, well, well

This song is a shakedown of creep. The production is cheap and hasn’t aged well. This is the type of production you would expect out of a song from the 80s. The cheapness of it devalues the sexy vibe that the song is trying to set, which isn’t helped by everything else. Gregory Abbott as a singer is VERY bad. Just bad. His ability to hit notes is on-par with Shaq’s free-throws abilities. And these lyrics are twenty levels of creepy. It’s a loser who’s so horny and lonely that he’s stalking his ex-girlfriend and wants to “shake her down.” How is there not a restraining order filed against you? When I eventually get to doing a Worst Songs list for 1987, Shake You Down will most definitely make an appearance. How high, I don’t know. But there’s a spot with its name on it. Next Target Practice, Eminem, Royce da 5’9, and Bruno Mars on one song. What could possibly go wrong? Hey that rhymed.

3 thoughts on “Target Practice: Gregory Abbott “Shake You Down””