Welcome to Target Practice where bad popular songs of the past and present get shot. Allow me to tell you a story of two Detroit emcees named Ryan Daniel Montgomery and Marshall Bruce Mathers III, also known as Royce da 5’9 and Eminem. In the late 90s, they were a rap duo called Bad Meets Evil. The songs they made together are Nuttin’ To Do, Scary Movies, and Bad Meets Evil. But then Eminem blew up and D12, another rap group Em was a part of, gained notoriety. Some bad blood formed between Em and Royce, resulting in diss tracks, until the death of D12’s own Proof made them squash their beef. In 2011, Em and Royce reunited Bad Meets Evil and released a 9-track EP titled Hell: The Sequel. It’s a record that’s worth checking out, especially if you’re a fan of these two. But there is one song that you can skip, which happens to be the most successful song on the album. It’s today’s Target Practice featuring Bruno Mars. This is Lighters. 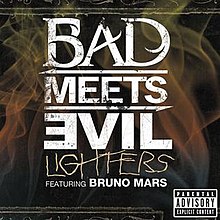 So if we’re going by this chorus alone, this looks to be an uplifting, inspirational song. About rising to the occasion against adversity of any kind. Let’s see if the verses delivers to that premise, starting with Eminem.

If I was you I would duck, or get struck, like lightning,
Fighters keep fighting, put your lighters up, point em’ skyward uh

Question: do people still put up lighters in concerts? It’s 2017 and most concert footage I see is people with smart phones. This song was released in 2011, not the 70s.

This rap game’s nipple is mine for the milking,
Till nobody else even fucking feels me, till’ it kills me
I swear to God I’ll be the fucking illest in this music
There is or there ever will be, disagree?
Feel free, but from now on I’m refusing to ever give up

Why be a king when you can be a god?

Only thing I ever gave up using’s no more excuses
Excuse me if my head is too big for this building
And pardon me if I’m a cocky prick but you cocks are slick
Popping shit on how you flipped ya life around, crock-o-shit
Who you dicks tryna kid, flipped dick, you did opposite
You stayed the same, cause cock backwards is still cock you pricks

Don’t know if I’m pointing out the obvious or not, but for someone whose lyrics contains homophobia, Eminem is severely obsessed with penises.

I love it when I tell em shove it
Cause it wasn’t that, long ago when Marshall sat, flustered lack, lustered
Cause he couldn’t cut mustard, muster up, nothing
Brain fuzzy, cause he’s buzzin’, woke up from that buzzin’
Now you wonder why he does it, how he does it
Wasn’t cause he had buzzards circlin’ around his head
Waiting for him to drop dead, was it?
Or was it cause them bitches wrote him off
Little hussy ass, scuzzes, fuck it, guess it doesn’t matter now, does it
What difference it make?
What it take to get it through your thick skulls
That this ain’t some bullshit

Lose Yourself did it better.

People don’t usually come back this way
From a place that was dark as I was in
Just to get to this place
Now let these words be like a switch blade to a haters rib cage
And let it be known that from this day forward
I wanna just say thanks cause your hate is what gave me the strength
So let em bic’s raise cause I came with 5’9″ but I feel like I’m 6’8″!

Nah, you’re still here. Still not relevant mainstream-wise, but you haven’t left yet.

I advance like going from toting iron to going and buying 4 or 5 of the homies the iron man Audi
My daddy told me slow down, boy, you goin’ to blow it

You might want to listen to your father before you end up like Hammer in the late 90s.

And I ain’t gotta stop the beat a minute
To tell Shady I love him the same way that he did, Dr. Dre on the Chronic
Tell him how real he is or how high I am
Or how I would kill for him for him to know it

My God. This is like I Need A Doctor. Just marry him already.

I cried plenty tears, my daddy got a bad back
So it’s only right that I write till he can march right into that post office and tell em to hang it up
Now his career’s Lebron’s jersey in 20 years

I’ll stop when I’m at the very top
You shitted on me on your way up
It’s ’bout to be a scary drop
Cause what goes up, must come down

In that case, you won’t be stopping anytime soon, right?

You going down on something you don’t wanna see, like a hairy box

What if they like hairy boxes? Everyone has a preference.

Every hour, happy hour now
Life is wacky now
Used to have to eat the cat to get the pussy
Now I’m just the cats meooww, ow
Classic cow, always down for the catch weight like Pacquiao
Ya’ll are doomed

I remember when T-Pain ain’t wanna work with me
My car starts itself, parks itself and autotunes

Maybe it’s because T-Pain didn’t know who you were and thought you were just another no-name underground artist.

You mean the former mayor of Detroit currently serving a 28-year sentence for fraud and corruption? Not the best person you wanna compare yourself to.

And now I’m fantastic
Compared to a weed high
And y’all niggas just gossipin’ like bitches on a radio and TV
See me, we fly
Y’all bugging out like Wendy Williams staring at a bee-hive
And how real is that
I remember signing my first deal and now I’m the second best, I can deal with that
Now Bruno can show his ass, without the MTV awards gag…

Well. That was weaksauce. Let’s see what Bruno has to say.

You and I know what it’s like to be kicked down
Forced to fight
But tonight, we’re alright
So hold up your lights
Let it shine

Notice how different this and the chorus are from the verses? That’s a problem.

This song is WEAK. Can’t believe I actually used to like this song. What the hell was wrong with me? The production aims for an uplifting vibe, but ends up sounding dull and colorless. Not helping are the lyrics, which are just, “I made it in spite of people dragging me down” or as DJ Khaled would say, “they don’t want to see you win.” The bars do not connect, which is a shame considering that this is Eminem and Royce da 5’9. A song like this should leave some emotional impact on the listener and this one just doesn’t. Plus, it drags on for too long. Lighters is not a good representation of Hell: The Sequel, it sounds like a Recovery reject. Em, Royce, and Bruno, you’re better than this. Next Target Practice, we tackle a current hit.

For The Love Of Money-O’Jays

The Story Of OJ-Jay Z