Welcome to Target Practice where bad popular songs of the past and present get shot. So. Selena Gomez. What a disappointment she turned out to be. Out of all of the former Disney kids, she became the least interesting one compared to her contemporaries. I like a few songs from Demi Lovato and as much as I can’t stand Miley Cyrus, she at least causes a reaction from me. Selena, on the other hand? Every time I try to listen to most of her songs, I get nothing out of them. At best, her songs are passable. At worst, you get Come And Get It, Hands To Myself, and today’s Target Practice victim. Featuring a man who has an ice cream cone tatted on his face, this is Fetish. 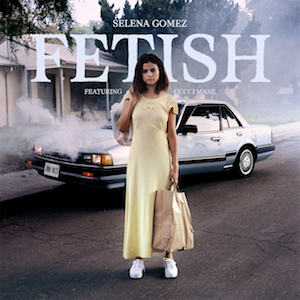 But I know you won’t leave it
‘Cause I know that you need it, ah

Still not seeing it.

I’m not surprised
I sympathize, ah
I can’t deny
Your appetite, ah

You got a fetish for my love
I push you out and you come right back
Don’t see a point in blaming you
If I were you, I’d do me too

Ripping off a line from one of the worst songs of this decade. This is beyond scraping the bottom of the barrel. This is scavenging a landfill for anything of value.

I guess you can say that he has… NO LIMIT, right?

Something about me
Got you hooked on my body
Take you over and under and twisted up like origami, ah

That. Sounds painful. Let’s get into the obligatory rap feature from Gucci Mane. This oughta be fun.

The way you walk, the way you talk
I blame you ’cause it’s all your fault
Ya playin’ hard, don’t turn me off
Ya acting hard, but I know you soft
You my fetish, I’m so with it
All these rumors bein’ spreaded
Might as well go ‘head and whip it
‘Cause they sayin’ we already did it
Call on Gucci if you ever need and
I’ll be South Beach in the drop top gleamin’
Order diamonds, Aquafina
Just need you in a blue bikini

Well. It’s relatively tame compared to what Gucci usually does. Still doesn’t make it good. And that’s about the end of the song.

This song is a limp dick. It’s basically Good For You 2.0, but worse. For a song called Fetish, the content of the lyrics feel relatively tame. “You got a fetish for my love” is so vague, you might as well say nothing. If you’re gonna go with sexy, commit to it, don’t half-ass it. This might as well be a song for a Fifty Shades Of Grey soundtrack, which it’ll totally fit. The production is a drag, Selena was boring as hell, and Gucci Mane was pointless as he was brought in to fill in the quota of “generic rap verse in generic pop song.” This is a dull, dull song that doesn’t do Selena any favors. Next Target Practice, the Archies.

Owner Of A Lonely Heart-Yes