Welcome to Target Practice where bad popular songs of the past and present get shot. In 1959, Berry Gordy Jr. founded the label Motown, which became one of the biggest black-owned record labels of the 20th century. Some of your favorite soul and R&B hits of the 60s and 70s, you can thank them for. But this isn’t about Berry Gordy or Motown, this is about one of his sons Kennedy William Gordon. He wanted to get a break in the music business as an artist, but he didn’t want to be overshadowed by his father, so he adopted the name Rockwell from Motown’s suggestion and signed a record deal behind his back. He would then craft what would be the biggest hit that he’ll never recreate and it’s the subject to today’s Target Practice. Featuring childhood friend Michael Jackson (did I ever mentioned that the Gordys and Jacksons were really close?), this is Somebody’s Watching Me. 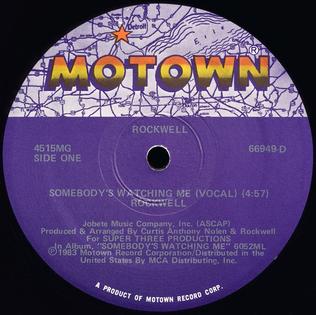 After this song, nobody.

I’m just an average man, with an average life
I work from nine to five; hey hell, I pay the price
All I want is to be left alone in my average home
But why do I always feel like I’m in the Twilight Zone, and

Your father is Berry friggin’ Gordy. Average is not the appropriate word one might use for you.

This chorus makes the song. Seriously. And it makes sense for Michael Jackson to sing it. Dude is one of the biggest pop stars to ever live. If anyone has to be paranoid about being watched, it’s him. Back to Rockwell.

When I come home at night
I bolt the door real tight
People call me on the phone I’m trying to avoid
Well, can the people on TV see me
Or am I just paranoid?

Eww to this line in more than one way. Imagine how he’ll look and smell after not showering because he’s afraid someone’s watching. Speaking of, are there people out there who wack off from watching people take a shower? Not kink-shaming, just asking.

If someone made a song like this in the 21st century, I’d bet he would avoid his computer because he’s afraid someone could be spying on him through the internet.

Ladies and gentlemen, we are witnessing a man experiencing a mental breakdown.

And I don’t feel safe anymore
Oh, what a mess I wonder who’s watching me now
(Who?) the IRS?

Oh, no. The people who collect taxes for a living have their eye on you. The horror. If only you’d pay your taxes on time instead of locking yourself in your own house like a demented weirdo while wearing a tin-foil hat.

All joking aside, this song is really good. The production of this song is amazing thanks to those cold, eerie synths playing alongside the creepy ass organ and the robotic voices that would pop up every now and then. It’s perfect music for the Halloween season and compliments the idea of the song, which I also really like. Someone being paranoid out of their goddamn minds will always make for some interesting songs. Michael Jackson, of course, delivers a stellar hook. The weakest part of the song is Rockwell himself, who doesn’t really sing as much as he does talking. Also, in the second verse, he adopts a British accent for some unknown reason. There was no way he wasn’t going to be overshadowed by Michael. So, yeah. In spite of what I said through the whole post, I enjoy the hell out of this song and its music video. Next Target Practice, we’re staying in the 80s and Motown as we tackle an actual bad song, this time, from Lionel Richie.