I’ve waited my whole life for this. Out of all the Marvel movies-scratch that. Out of all the comic book/superhero movies, this is the one I was looking forward to the most. Even more so than Infinity War. Black Panther has always been one of my favorite superheroes as he’s not just a superhero, but he’s also the ruler of his own country. I loved the fourth volume of the comic series written by Reginald Hudlin and the latest volume written by Ta-Nehishi Coates and I also watched the animated series that aired on BET. Check it out if you haven’t, it’s really dope. Ever since the start of the Marvel Cinematic Universe, I’ve always wanted to see a Black Panther movie. And now, that movie is finally here on Black History Month and it has become a cultural phenomenon breaking all sorts of records. A black superhero movie written by, directed by, and starring mostly black people? You know I was sold and so were many others looking at the reception and box office numbers. So let’s dive right into it. This is Black Panther.

After the death of his father in the events of Civil War, T’Challa returns to the advanced isolated nation of Wakanda to be crowned king. But things get complicated when he has to capture an old enemy of Wakanda, plus, a man named Killmonger makes a challenge for the throne. This movie is directed by Ryan Coogler, whose previous films were Fruitvale Station and Creed, which are excellent films that are worth watching. He brings that same excellence to Black Panther. He did a great job bringing some nuance and gravitas to the story, which combines superheroes with James Bond and a Shakespearean tragedy. 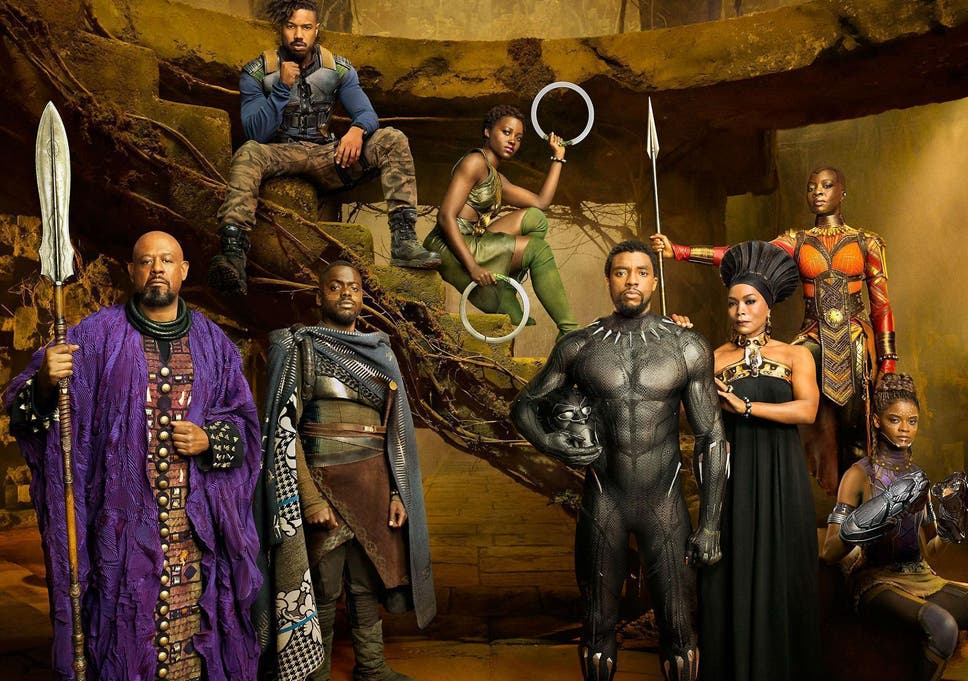 Dude. This casting alone deserves an Oscar. There’s not one bad apple among this bunch, everyone plays their role well. Chadwick Boseman does another great job portraying T’Challa. This time around, he has to deal with the pressures of being the new king of Wakanda and being the Black Panther. He has an internal struggle about what kind of leader he has to be and how he’ll compare to his father and other past kings. His resolution to be a good king becomes even stronger when he eventually finds out that the past rulers, including his father, weren’t perfect. The real MVPs of this movie are the women. They were awesome in every scene they were in and none of them were sexualized in any way. Letita Wright plays Shuri, T’Challa’s younger sister and genius scientist who built all the cool gadgets you see in the film, including the new Black Panther suit. She has some of the funniest lines and is the best Disney princess ever. You can fight me on that. Plus, I love her relationship with T’Challa and how she always tease him, even when he’s king. That’s some sibling shit right there. Danai Gurira portrays Okoye, the general of the Dora Milaje, the all-women bodyguards of the king. She brought into the movie the same badassery that she had when playing Michonne in The Walking Dead. Angela Bassett plays T’Challa’s mother and she was a good mother figure. Lupita Nyong’o plays Nakia, a War Dog (Wakanda undercover spy who carry out missions around the world) and T’Challa’s love interest. She doesn’t just play the love interest, she helped shape the way T’Challa thinks as a leader, which leads him to make Wakanda open up to the world. Also, it’s so dope to see dark-skinned women in the spotlight and as three-dimensional characters. We’re so used to seeing light-skinned women in the spotlight praised over dark-skinned women that a movie like this subverts that and it’s a beautiful thing. All the other characters are great as well. One highlight was Winston Duke as M’Baku, the leader of the traditionalist Jabari tribe who reject technology. In the comics, he’s known as Man-Ape. He doesn’t have that moniker in the movie because of the unfortunate racial history of comparing black people to monkeys and apes. It was for the best. He has a sense of honor to him and has some real comedic chops in the second half. Daniel Kaluuya plays T’Challa’s friend W’Kabi and Forest Whitaker plays Zuri, this movie’s version of Rafiki. There’s also the two Tolkien white guys, Martin Freeman as C.I.A. agent Everett Ross and Andy Serkis as longtime Black Panther foe Ulysees Klaue. Ross was cool while Klaue was a hilarious bad guy. Looks like Andy Serkis was having fun in this movie. Wish they didn’t kill him off like they did.

Now for the most compelling character in the whole movie, Michael B. Jordan as Erik Killmonger. He might be one of the best villains the MCU ever had. Hell, I dare say he’s a better villain than Loki. Some of the best villains aren’t just the ones who are evil for the sake of evil, but the ones who think they’re doing the right thing or present a moral challenge to the hero. You’ve probably already seen this comparison, but Killmonger is just like Magneto. He’s driven to liberate those he feel are oppressed (in this case, black people) and the means he would go involves taking the throne for himself and then commit genocide against who he feels are the oppressors. And I understand where he’s coming from. I don’t agree with his methods (killing white people won’t solve racism), but I get it. My ideology has always leaned more towards Martin Luther King than Malcolm X, but with all the shit black people have gone through thanks to slavery, Jim Crow, etc., I’m not surprised by those who feel that peaceful, nonviolent methods won’t work, who would go down a more radical path. Killmonger brings up a sorta-good point against the Wakandans, that they have the technology to help black people in general, but they didn’t. He grew up in the United States, so he knew a thing or two about racism and discrimination. All of this makes the ending where T’Challa opens up Wakanda to the rest of the world more powerful. Killmonger was kinda right in a sense. 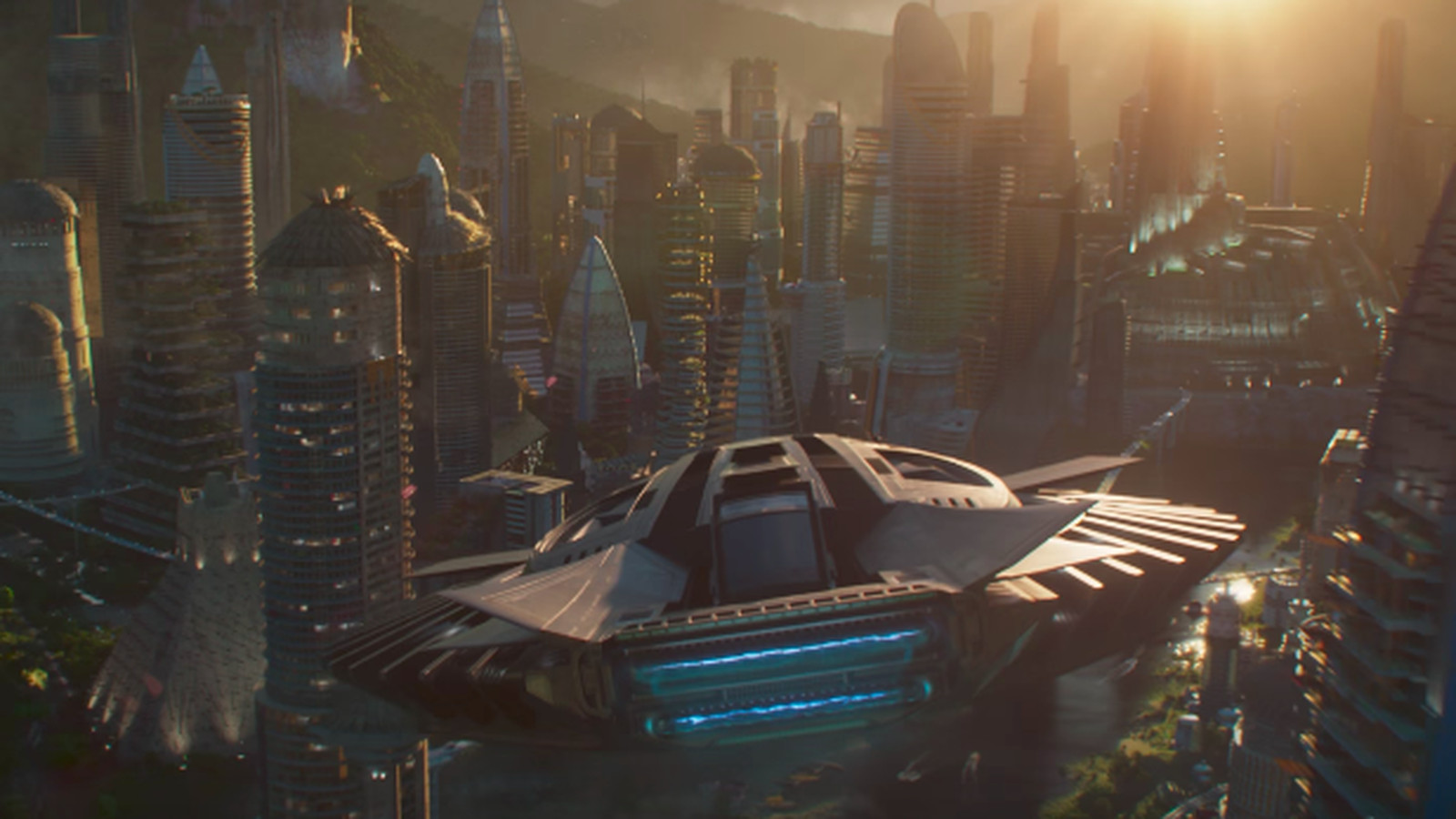 I’ve talked a lot about the philosophies of Black Panther, now let’s get into the technical details. The world of Wakanda is Afro-futurism on maximum overdrive. Something people, even black folks, tend to forget is that Africa is not just one homogenous tribe, it’s a huge place with thousands of different unique cultures and the filmmakers did a lot of homework when it comes to creating Wakanda, mixing ancient traditions with science fiction. The colors really pop out, which isn’t surprising since this is Marvel Studios. This is one of the more serious MCU movies. Don’t get me wrong, it has jokes (funny ones I might add), but tone-wise, it was more Winter Soldier than Thor: Ragnarok. The humor is much more spread out and they don’t get in the way of the film. The action is also really good, from the ritual combat scenes to the casino/car chase scene in South Korea. The climax is a bit weak, mainly because we get a CGI brawl between T’Challa and Killmonger, who’s suited up. The CGI in that scene looked like an un-rendered video game. The B-fight, which is between the Dora Milaje and Killmonger’s forces, was much better. Also, war rhinos. One last thing; the score is awesome. I loved it when those African drums kicked in, it brought some more authenticity to the movie. They also found a way to work in hip-hop beats organically. Thank Ludwig Göransson for the score.

I give Black Panther a 10/10. This is officially my new favorite Marvel movie and it’s up there with the first Avengers, Winter Soldier, and Civil War. Great acting, great writing, great directing, great action, great music, it’s just greatness. Plus, it’s awesome to see African culture be depicted in a more positive, forward-thinking light with actual characters. It shows that black films can be more than just comedy, crime, or slavery. This is why representation matters because little black boys and girls can see themselves as and relate to these characters. Forget about the Negative Nancys who are complaining about black folks being hyped for this movie. They’re not fun people, especially when they criticize those who dress up in African garb while saying nothing about Star Wars fans dressed as Jedi or stormtroopers at screenings. This is just people cosplaying. Let people enjoy things. Anywho, I highly, highly, HIGHLY recommend you go see it if you can. I don’t expect it to change Hollywood overnight, but I hope it’ll open more doors for writers and directors of color and inspire more Afrocentric fantasy and sci-fi in mainstream film. Black Panther isn’t the first black superhero movie nor is it the first movie with a mostly-black cast and crew, but it is the most important culturally. In three months, we get Avengers: Infinity War. We’re almost there, ladies and gentlemen.