Welcome to Target Practice where bad popular songs of the past and present get shot. Let’s talk about Brandy. She was one of those teen idols of the mid-to-late 90s, selling multi-platinum albums and singles, having her own TV show Moesha (that I watched with my sister), and even having a line of Barbie dolls. As for me? I like some of Brandy’s songs and I’d argue that Full Moon is a near-classic. Though her discography isn’t completely spotless. This brings us to today’s Target Practice, which was a single off of Full Moon that prevents me from calling the album a straight-up classic. This is What About Us. 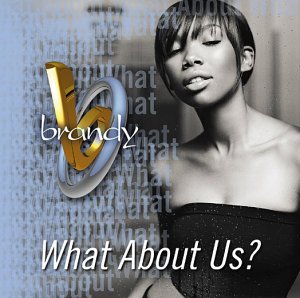 Why don’t you return my calls?
Why you trip out where I be?
You don’t ever come to see me
You say that you’re too busy (what?)

What the hell?
I don’t have time
Why you messin’ with my mind?
I can find another guy
Someone who will treat me right

Whatever you say. No one’s stopping you from leaving. I hope.

I don’t need this bullshit
I won’t put up with it, any longer
You can, go if you want
I don’t, need you pity
I will, be just fine
If you decide, that you want to leave
Close the, door behind you
I just, want to know what…

Damn, girl. Tell us how you really feel.

I thought you said you were different
Was that what I heard you say?
Said that you’d love only me
Thought that you’d be all I need (what?)
What happened to promises?
Said that you were a better man
Your words have no way with me
Cause you’re counterfeit, I see

So this dude was bullshitting you. Damn, he must be a scumbag if that’s the case. So what’s his deal?

Dont you think you’re being a little too harsh, Brandy? So what set this off? Huh? Do we ever get an answer? No? Okay.

This song is BAD. Like, really bad. The production is a clusterfuck of noise with some of the sloppiest mixing I’ve ever heard. When she’s not Auto-Tuned, Brady singing is awful. And then there’s the writing. We get a relationship gone down the toilet and it’s implied that the dude was unfaithful. Note that I said implied because the impetus of the situation isn’t made clear, thus, making Brandy look pissy for no reason. I’ve said this before and I’ll say it again, details and context are important. Otherwise, how are people supposed to be invested in what you’re talking about? This is a mess of a song and a pimple on the face of a really good album. Who let this happened? If I extended my Worst of ’02 list to 20, this would have been number 11. Next Target Practice, Lil Dicky and Chris Brown.

For The Love Of You-Isley Brothers

2 thoughts on “Target Practice: Brandy “What About Us””