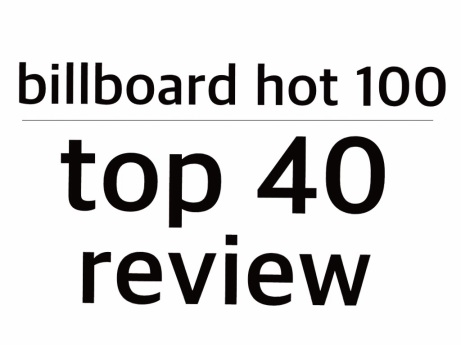 Welcome back to another Top 40 Review where we look at the 40 most popular songs in the United States. Let’s get started.

#35. I Was Never There-The Weeknd: The Weeknd has released a six-track EP titled My Dear Melancholy. Four songs off that EP have made the Top 40, starting with I Was Never There. It’s decent. I didn’t mind the beat even with that whistling, but then came the switch-up which made the song better. Like the rest of the songs on that EP, it’s about a relationship coming to an end (apparently, these songs are about Selena Gomez). I don’t love it, but it’s good enough for me that I’ll give it a B.

#34. Powerglide-Rae Sremmurd ft Juicy J: Rae Sremmurd is back and they’re planning to release Sremmlife 3, which will be a triple-disc record with one part Swae Lee, the other Slim Jxmmi, and the other will be both of them. Think of it as Speakerboxxx/The Love Below if it sucked. Anyways, Powerglide with Juicy J. Best thing I can say about this? The beat’s not that bad, even when it’s sampling Three 6 Mafia. Aside from that, it’s more bragging and materialism out of these two and their delivery keeps on cracking. Juicy J is probably the best performer, but even he wasn’t that great here. Plus, the song is way too long. This shouldn’t be 5 and a half minutes long, especially when you’re not saying much. I saw some people like this song and these two are capable of much worse, but I’m still not a fan. This is a low D for me and I’m just being nice.

#31. In My Blood-Shawn Mendes: I think Shawn Mendes is getting back to my good side because the music he’s releasing now is really good. Just look at In My Blood. With this song, Shawn is going for something more mature and personal as he tackles the feeling of anxiety and he delivers one of his rawest performances to date. And then you have the production, which is mellow in the verses while delivering some punch in the chorus. I dig this song. I give this an A.

#28. Heaven-Kane Brown: So far, Kane Brown has yet to wow me and this song, Heaven, isn’t helping matters. It’s another mid-tempo acoustic pop country song with drum machines that sucks out the emotion. Kane’s baritone voice clashes with the more polished parts while thinking that heaven couldn’t be better than being in bed with his girl. The song isn’t bad, but it ain’t great, either. I give it a low C.

#27. Wasted Times-The Weeknd: Next up is Wasted Times, which continues the theme of The Weeknd still feeling some type of way after a relationship ended. The production is reminiscent of The Weeknd’s older material before he blew up. Honestly, I don’t have much to say about this song: it’s just okay overall and I give it a C.

#26. Try Me-The Weeknd: Now for the third Weeknd song Try Me, no Dej Loaf. This is one of the weaker songs off of the EP. It’s a song where Abel is trying to steal a girl from another man and it’s really obnoxious. The murky production (with contributions from Mike Will Made-It) doesn’t help matters, either. Yeah, I’m not feeling this I give it a D.

#25. Friends-Marshmello & Anne-Marie: You know? I was rooting for Marshmello. Even though he does contribute the same EDM songs as other DJs, his songs (well, his hits, at least) have some color to them. Still, he is running on a formula and I’m not sure it works in Friends. First off, the production is really stale and the drop is REALLY underwhelming. And second, there’s the writing. Marshmello called this the friendzone anthem and we have Anne-Marie shutting a guy down, insisting they’re just friends and nothing more. This shit is obnoxious and Anne-Marie’s performance reinforce that obnoxiousness. Even if it was a parody, it’s still not good. I give this song an F.

#23. Whatever It Takes-Imagine Dragons: B

#16. Be Careful-Cardi B: A few days ago, Cardi B released her debut album Invasion Of Privacy. I just got back from listening to it and it was okay. It’s a standard debut album with Cardi B’s personality shining the most. There’s always room for improvement. Her newest single from that album is Be Careful, which samples Lauryn Hill’s Ex Factor, which sampled Wu Tang Clan’s Can It Be All So Simple, which sampled Gladys Knight’s cover to Barbara Streisand’s The Way We Were. Phew. That’s sample-ception right there. Anyways, I like this song. The beat’s got some bounce to it, Cardi brought in the bars, and the subject matter, revolving around cheating, is well-handled. Not feeling her attempts to be melodic, but that’s a nitpick overall. I would listen to this over the other hundreds of trap rappers and songs out there. I give this a B.

#14. Never Be The Same-Camila Cabello: F

#13. Plug Walk-Rich The Kid: Another month, another generic trap rapper gaining attention. This time, we have Rich The Kid with Plug Walk. Desaturated, clumsy trap beat, more flexing and bragging, and a basic ass flow. It’s really an empty, uninteresting song that got this high because streaming has a lot of power. Hell, trap in general thrives off of streaming. I give this song an F.

#10. Walk It Talk It-Migos ft Drake: And now for another Migos song. This time, Walk It Talk It with Drake because of course. And it’s here because of its music video that parodies Soul Train. Yet the song itself lacks the flavor and style that Soul Train has because it’s another bargain-bin trap song with a barebones beat, a repetitive hook that brings to mind Migos’ older songs, stupid punchlines from all three rappers, and Drake phoning it in all the way through. I didn’t like MotorSport, but it at least had Cardi B and Stir Fry has a great beat. Walk It Talk It is just crap all around. I give it an F.

#4. Call Out My Name-The Weeknd: And now for Call Out My Name, the highest charting single from My Dear Melancholy. It samples Earned It because why not suck your own dick. In this song, The Weeknd still can’t get over a past relationship and is hoping that his ex still have feelings. Honestly, while this isn’t one of my favorite Weeknd songs, I’ve heard much worse from him. I give it a C.