In one of his old videos, Todd In The Shadows named three years that he considers to be the best in pop music history: 1983, 1976, and 1965. We’re here to talk about the latter year and Todd was right. 1965 was pretty damn awesome. It’s the second year of the British Invasion and Beatlemania. The 50s is slowly, but surely, losing their grip as more rock songs have made their appearance on the charts along with folk and Motown. It’s a golden age for popular music, but even those have their blemishes, so let’s look at those blemishes right now. 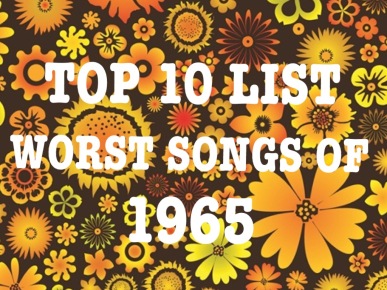 Freddie And The Dreamers starts the list off with I’m Telling You Now, which became a number one hit in the US and number 2 in their native U.K. This is another one of those songs that actually started a short-lived dance craze called the Freddie. I’m gonna let Wikipedia explain the dance to you.

Yeah, this is one of those songs. Aside from that dumb shit, the instrumentation is dull, I can’t stand the nasal singing, and there’s not much to the writing. It’s just a guy saying “I love you” to a girl and I don’t give a shit about it. Let this song remain forgotten because it’s pretty inessential. Next up is Glenn Yarbrough, who performed the title song for the 1965 film Baby The Rain Must Fall. I don’t know much about the film since I haven’t seen it, but it does star Steve McQueen. As for the song itself, it’s pretty generic and typical of songs that were made for movies at the time. Very meh instrumentation and Yarbrough’s performance is nothing to write home to. And there’s the writing. From what I got, it’s a guy who doesn’t want to settle down in a relationship because of some passion he has, which isn’t bad in itself, but it’s presented in a poetically douchey way.

But, baby the rain must fall,
Baby, the wind must blow,
Wherever my heart leads me
Baby, I must go, baby I must go.

Mmm-hmm. Sure, buddy. Whatever you say. I was gonna make a Boondocks joke for this entry, but it wouldn’t fit. This is Down In The Boondocks by Billy Joe Royal. It’s about a boy from a poor, rural part of town who’s often underestimated because of where he was from and he falls in love with a girl from the richer part of town, but there’s a twist: her father is his boss. Yeah, this sounds like the plot to a corny romantic comedy. As for the rest of the song? First, the singing. Billy Joe Royal in this song sounds awful. And second, the instrumentation is typical hokey-sounding country music. Maybe this is why I don’t listen to that much country music. Save Your Heart For Me is a song that was originally written for and recorded by Brian Hyland. Then came Gary Lewis & The Playboys, who covered it and saw more success. Musically, it’s not bad, even if it isn’t anything that special. But my main issues with this song stem from the writing. Basically, it’s a guy saying to his girl, “you can go out and have fun, but don’t fall in love with anyone but me.” This dude sounds way too possessive and is only trusting at a certain point, like she can flirt with other dudes, but not be in a relationship with them. It makes me question the relationship between the two. They seem less like a couple and more like two roommates. You might have a different interpretation, but this is just me and it’s preventing me from liking this song. Patty Duke is one of many kid stars from the 60s. She had her own show and won an Academy Award for her performance as Helen Keller in 1962’s The Miracle Worker. And like a lot of kid stars, she also had a music career. Her big hit is Don’t Just Stand There and it’s crap. It’s a corny love song at the most elementary level where Patty Duke is being a dick to a guy and wants him to say or do something when he’s just standing. Also, is it me or does this sound criminally similar to You Don’t Own Me by Lesley Gore? It has that same epic-sounding instrumentation, but watered-down to its most basic level, and the way Patty Duke sings this song almost sounds like that song. So Patty Duke sounds like a lesser version of Lesley Gore. I don’t expect kid stars to be that original or creative, but wow. Sometimes, you just know a song is going to suck just by looking at the title. For example, we have The Name Game, performed by Shirley Ellis. I can’t even call this a song, this is more of a children’s nursery rhyme. More specifically, it’s a nursery rhyme based on people’s names and variations of those names. I would talk about the music, but it’s pretty stock 60s R&B that doesn’t stand out. There’s nothing wrong with nursery rhymes in general, but they do not belong on the pop charts. They just don’t. Maybe it’ll fit Radio Disney, but that’s it.

Speaking of elementary crap, The Birds And The Bees by Jewel Akens. The title is based on an idiom used to explain to kids how babies are made if they don’t buy into the stork story. If you’re expecting something more graphic, well, you’re going to be disappointed because this shit is sanitized as hell. It handles the topic of sex as well as Afternoon Delight and takes the safest road possible. You can’t keep beating around the bush when it comes to this topic. No pun intended. You either talk about it or don’t and this song feels like they were trying to have their cake and eat it. Add in some sloppy instrumentation and you got yourself a bad song. And while we’re on the topic of sex, we have this song. It also has a title that doesn’t give me hope for its quality. Ian Whitcomb’s You Turn Me On. And it’s about the first thing on your mind when you hear the phrase “you turn me on.” For those who think I’m reading too much into it, I present to you this.

All of it. Performed in a falsetto that sounds like Ian Whitcomb is beating his little British meat while recording. Making matters worse is that the chorus sounds like he just climaxed. I don’t need to hear that shit, bruh. Do the jerk in the privacy of your own home, not in public where kids could see you. I feel bad for the poor sucker who has to clean up after him. Remember Dickey Lee? The guy who made Patches? Well, turns out that’s not the only turd he put out. He also had Laurie (Strange Things Happen). And guess what? Just like Patches, it’s a teen tragedy song. Because people weren’t already tired of hearing about dead kids. So here’s the story of Laurie: a guy meets and falls in love with a girl named Laurie and it’s her birthday. He walked her home from a dance and he gave her his sweater. Later on, he heads back to her home to get his sweater back when he’s confronted by her father, who said she died a year ago on her birthday. So the dude heads over to the graveyard and sees his sweater on her grave. I have questions. *clears throat* Did Laurie die from an accident or suicide? How did we get from this dude taking her home to her being dead for a year? Where was he the whole time she was dead? Why was a sweater just sitting there on someone’s grave? Was Laurie really a ghost? Was the dude hallucinating? I feel like some important details have been left out, raising more questions than needed and that’s why this song fails. That, and the fact that it’s boring and needlessly depressing. So what’s worse than this? As one might be able to tell, the British Invasion didn’t always give us quality material. For every Beatles, you get a Herman’s Hermits. I do not like these guys at all. They’re an awful band. Every song I heard from them on this YE list was crap, which left me wondering which one was worse. But I ended up going for a tie. Mrs. Brown, You’ve Got A Lovely Daughter is a dude conversing with his ex’s mom and complaining about her (the ex). Even if that doesn’t make you want to punch this guy in the face for being a shitbag, there’s also the shitty instrumentation and singing. Dear Odin, the singing is annoying. The lead singer sounds like he recorded this with a stuffy nose, it’s that bad. And then there’s I’m Henry The Eighth, I Am. Fuck this song with a hot iron. It has better instrumentation than the previous song, but it’s just as annoying and the singing hasn’t gotten any better. Half of the song is the chorus and the other half is just one verse repeated three times. It’s repetitive nonsense that seeks to annoy people. And this band would go on to have more hits until the late 60s. Congratulations to both Mrs. Brown, You’ve Got A Lovely Daughter and I’m Henry The Eighth, I Am for being the worst songs of 1965.

And those were the worst songs of 1965. In two weeks, BACK TO THE 60s continues with the Worst Songs of 1966. Oh, and keep an eye on the UPDATES page tomorrow.