1967. The Summer of Love. Remember back in the last list where I said that 1966 was the best year for 60s pop music? Well, I was wrong because 1967 blows it out of water and it’s one of my favorite years in pop music, up there with 1983 and 1976. Psychedelic music pretty much had a chokehold on the charts. Soul, jazz, and early funk gave us some terrific records. Hell, there’s a lot of great music in 1967 that either doesn’t chart or doesn’t chart that high. The year was so good that half of the songs that are going to be mentioned on this worst list fall under the “meh” category. So let’s count them down. 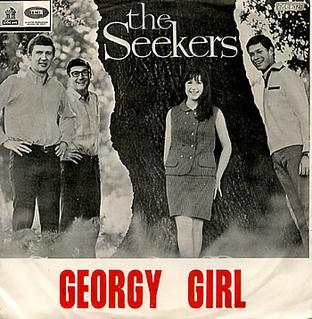 Well, this is one way to start the list. Here’s a group who’s had the misfortune of making it onto these lists more than once, the Seekers. I don’t even hate these guys, but man, a lot of their songs are underwhelming. This time, they’re on this list for Georgy Girl, a song that they did for the soundtrack to the film of the same name. Again, haven’t seen the film, so I’m looking at the song by itself and it’s kinda lame. It has generic folk instrumentation and generic vocals. And the writing is all about a girl named Georgy. To be more accurate, her name in the movie is Georgina. Regardless, it’s not delivered in a way that I care. It goes in one ear and out the other. Next. 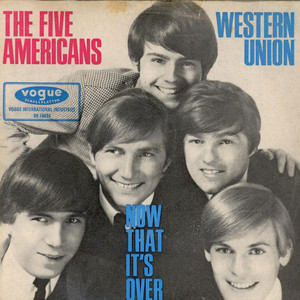 Not sure what I expected out of a song named after a bank, but I don’t want to listen to it again. Western Union by the Five Americans. This sounds like a low-rate Americanized imitation of a Beatles song, which wouldn’t be surprising since there was a ton of Beatles wannabes during this time period from both sides of the Atlantic. In the chorus, they do an imitation of a telegraph, which gets really annoying. Hell, this feels like a song that would be played for a telegraph commercial if there ever was one. In the song, a guy gets a telegraph from his girl, who’s breaking up with him, and he’s not talking it well. It’s not interesting and I don’t care for it. Send back to user. 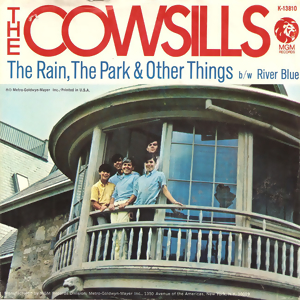 With the popularity of psychedelic music, you’re going to find some records that don’t live up to the best of the genre. Take, for example, the Cowsills, who hit it big with The Rain, The Park & Other Things. It’s about a guy who meets a flower girl in the middle of the rain and they take a walk through the park, but then it stops raining and suddenly, the girl disappears, leaving him a flower. The dude wonders if it was real or not. This might have been an LSD trip, which given the time period, wouldn’t be surprising at all, but if it was, it’s kind of a mundane acid trip, just seeing someone who really wasn’t there. Come on, bruh. You gotta do better than that. Musically, the song is way too corny and hokey for its own good. Another song that I would gladly skip any day.

Next up is a cover, more specifically, a cover to a Four Tops hit called Baby I Need Your Loving. It’s a really good love song and another staple of the Four Tops. Then came Johnny Rivers, who covered the song three years after its release and it became a hit for him. And it’s another example of a white-washed cover to a song made by black artists. The music is slowed-down to sounding like the soundtrack to an old movie. Vocally, Johnny Rivers was never going to sound as good as the Four Tops. He sounds like a white guy’s poor imitation of a black singer. Whatever soul existed in the original song has been sucked out of it like a black hole and in its place is the music equivalent to mayonnaise-covered bread. Skip this one immediately. Hey, did you ever want to hear a song inspired by a Peanuts B-plot where Snoopy imagines himself as a World War I pilot fighting the Red Baron? Well, that’s what we got from the Royal Guardsmen (yes, that is the band’s name, as silly as it is) and it’s called Snoopy vs. The Red Baron. As the title implies, the song is about the conflict between Snoopy and the Red Baron. A cartoon dog in a flying doghouse against a German pilot in World War I. This is some dumb shit even for novelty hits from the 60s. This is fine for a cartoon, but not for a song playing on the radio or being number 2 on the charts. Get this mess out of here. And this wouldn’t be the last time the Royal Guardsmen would make a song based around Snoopy. There’s also The Return Of The Red Baron, Snoopy’s Christmas, Snoopy For President, and Snoopy vs. Osama. Just milking that cow until it’s dry now, huh?

On the contrary, don’t let it all hang out. Keep it in your pants. Please. Anyways, this is the Hombres, a band from Memphis who are not Hispanic in any way and have only one hit song in Let It Out (Let It All Hang Out). It’s another crappy novelty song made to waste time, especially with an intro like that. After that, we get some dull rock instrumentation and the lead singer barely singing as he’s monologuing about random shit. It’s not engaging, it’s really stupid and nothing of value came from it. It’s just a nothing song. Next. For the second time in a row, Sandy Posey makes the Worst list for another awful song. This time, it’s I Take It Back. Aside from being boring and sloppy at transiting tempos, Posey is trying to break up with her boyfriend, but when he gets emotional, she goes “just kidding” and backtracks what she said. And this happens more than once. Even if there was no malicious intent in her actions, this woman is playing with this dude’s emotions and that could backfire severely. Make a choice. Do you want to break up or not? And this is the final thing she says on the song.

Sometimes it’s better to be loved, than it is to love

That’s the most pseudo-deep bullshit quote I’ve ever heard. It’s better to be loved than it is to love. That sounds like some shit Drake would have came up with. Next song. 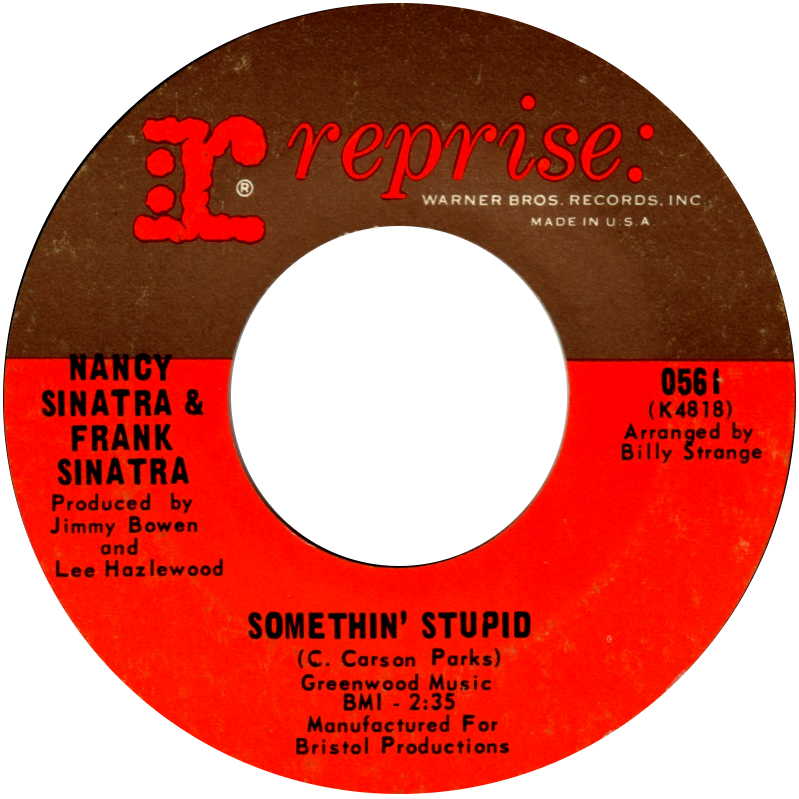 You know, I just realized something. I’m not a fan of family members doing love songs together, especially if they’re the opposite sex. It always gives off a weird and creepy vibe that doesn’t need to exist. Take, for example, Somethin’ Stupid, a duet that Frank Sinatra did with his daughter Nancy. Mind you that this is a cover to Something Stupid, a duet from Carson And Gaile a year prior, who were also husband and wife. So remember that when you hear this love song being performed by a father and daughter.

The time is right, your perfume fills my head, the stars get red and, oh, the night’s so blue

I mean, it’s well-performed, but there’s so many icky implications coming out of this song. Did no one think about how this would come out during this time? I didn’t like it when they did this with Donny and Marie Osmond, I don’t like it here. 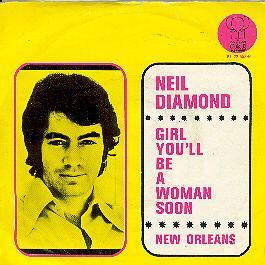 At number two, we have a song that deserves one reaction: yikes. And it’s called Girl, You’ll Be A Woman Soon from Neil Diamond. In this song, a guy is in love with an obviously underaged girl in spite of what people say about him and he’s giddy about her being a woman soon. Okay, that in itself is just creepy. This dude has his eyes on a girl who isn’t of legal age and he might be grooming her into being his. I’m getting Into The Night flashbacks thanks to this and I don’t want to remember that piece of crap. What is up with famous musicians and their obsession over underaged girls? Don’t answer that question, it’s a rhetorical one. Ugh. I need a palette cleanser. You wanna know something sad? As a kid, I used to look up to Bill Cosby. I loved The Cosby Show and I watched A Different World. I admired all of the work he did to present a positive image of black people in the media and in entertainment. Then there was the Pound Cake speech where he basically shitted on poor black people for not living the right way and he came off as an elitist asshole. Don’t even get me started on the multiple rape allegations against him. Point is, Bill Cosby let me down big time. He let us all down. Now for the song that tops this list. What the flying fuck is this? Little Ole Man lifts its music, chorus and backing vocals from the Stevie Wonder song Uptight (Everything’s Alright) and it doesn’t even try to hide it. It’s pretty damn clear. Couldn’t Cosby hired studio musicians to make original music? It’s not like he doesn’t have the money because he does. As for the writing? It’s based on the following scenario: Cosby running into a “little ole man” two times, the first time, he got hit by a train, and the second time, getting caught in an elephant stampede. What’s the joke? What’s supposed to be funny about this? Where’s the punchline? There’s absolutely nothing in this song to enjoy. The premise is unfunny, Cosby doesn’t even sing, and if you’re in it for the music, just go and listen to the Stevie Wonder song I just mentioned that it ripped off. You’ll get a better listening experience from that than from Cosby’s violation of it just like he does to women. Congratulations to Little Ole Man for being the worst song of 1967.

Will It Go Round In Circles-Billy Preston