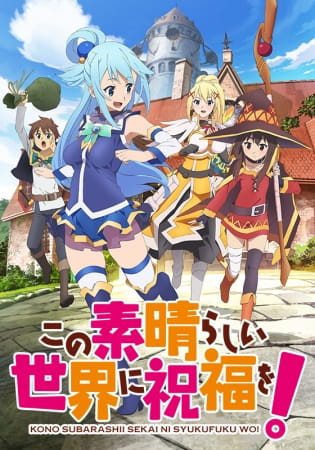 The subject of today’s review, KonoSuba: God’s Blessing on this Wonderful World, started off as a light novel by Natsume Akatsuki. It ran from six volumes from 2012 to 2013. Then, in 2016, it was adapted to an anime series that currently has two seasons, plus, an upcoming movie. This is Konosuba.

When Kazuma Sato dies in an accident, he’s revived by a goddess and is sent to a fantasy world that functions like an RPG game. There, he forms a team with a goddess, a mage, and a knight for crazy adventures. On a surface level, this seems like just another fantasy anime taking place in an RPG world, but they flipped that concept on its head and made it more of a comedy. It’s less about the story but more about the jokes and the situations that the characters find themselves in. Speaking of… 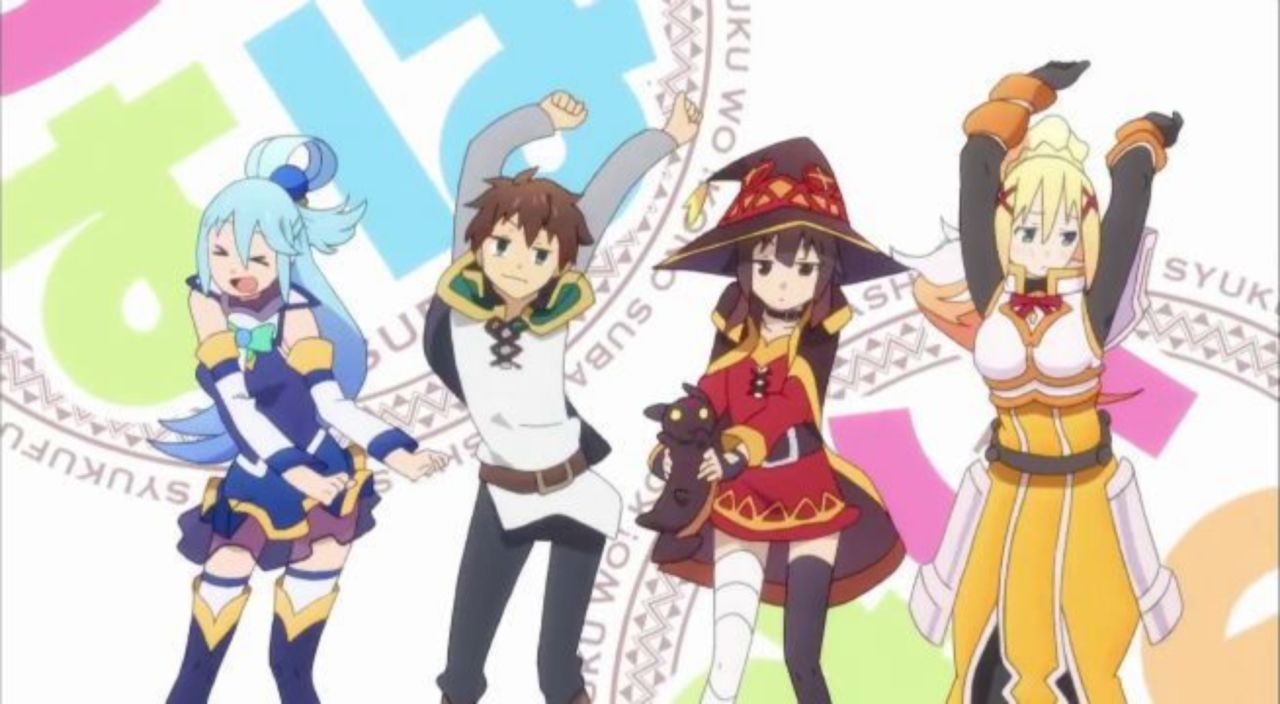 Let’s talk about our main four characters. The first is our male lead Kazuma, a shut-in gamer who plays the straight man to a wacky world and isn’t driven by any noble causes. If anything, his causes are more selfish than anything. He originally set out to defeat the Devil King, but with his limited skills and the team that he’s on, he’s like “fuck it” and decided to just make a living in this world. In the RPG, his skill sets are average all around with the exception of above average intelligence and extremely high luck. Throughout the series, he learns new skills that he uses in unconventional ways. There’s also Aqua, the goddess who revives Kazuma and is brought to the RPG world with him. I’m gonna be real with you: Aqua is annoying. Her constant yelling and screaming and crying just got on my nerves as the series went on. Her magic stats are really high, but that’s contrasted by her low intelligence and luck stats, which often lands her in some hilariously bad situations. Megumin is a spunky wizard who only uses one spell, Explosion. It’s a powerful spell, but it drains her magic energy after one use, making her a liability at cases. And then there’s Darkness, a knight with strong offense and defense, but shitty accuracy, meaning she can’t hit her targets that well. Also, she’s a full-blown masochist. Any time there’s danger, she would always throw herself in harm’s way in order to satisfy her masochism. She’s obviously into some freaky shit. This is obviously a dysfunctional four-person team where no one would be able to get along and it makes for great comedy, but there’s times where they find a way to use their strengths and weaknesses to their advantage in quests. Also, in a different situation, this would have totally been a harem anime. I also like the side characters in this series like the receptionist with way too much cleavage, Eris, another goddess that Kazuma meets, Wiz, a lich who runs a shitty magic shop, and many more.

The animation has lush environments and a simpler style for the characters, which works for this type of anime since their reactions can be more expressive and boy, do we get some expressions here.

This might be one of the funniest anime series that I’ve ever watched. I was cracking up every episode. I like how they just made a straight-up parody of a fantasy story, taking the usual tropes of that genre and flipping them upside down. Just when you think one thing’s gonna happen, something completely different happens. There are no big epic adventures to be had, it’s mostly mundane situations and every quest is done for money. One example I can think of is at the finale of season one when Kazuma and the crew save the town they reside in from a mobile fortress, but they ended up destroying some rich guy’s mansion and Kazuma is arrested for it. I kinda felt bad for the dude because he died in the most pathetic way possible. He thinks he was going to be this epic hero in a new world, but he’s stuck with three women who are a burden to him and he keeps getting beaten down in every turn of the way.

And that was KonoSuba, a hilarious comedy anime that takes the piss out of the fantasy genre and gives us characters who are charming and hilarious in their own way. Every episode has at least one piece of comedic gold. I enjoy the hell out of this series and I hope it gets more seasons. I’m also looking forward to the upcoming film adaptation, I hope that’s good. I highly recommend it to anyone looking for a good anime to watch. There’s currently two seasons on Crunchyroll right now, both 10 episodes each, plus 2 OVAs. If you’re someone who prefers dubs over subs, you’re shit out of luck because there is no English dub for this one. I’d still recommend it either way. Next time, we’ll talk about Devilman Crybaby.

One thought on “Anime Review: KonoSuba”